Supercooled water has been caught morphing between two forms 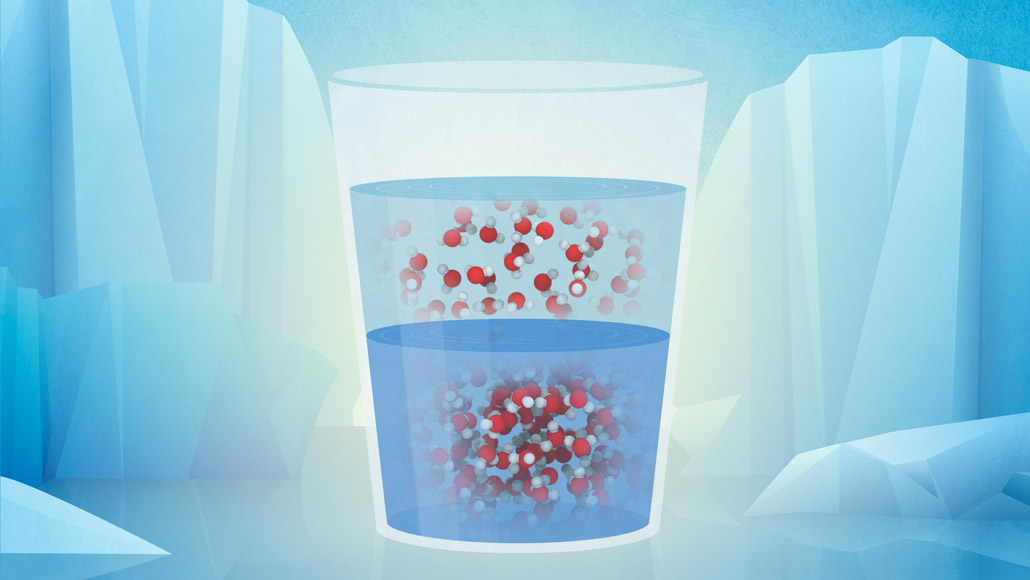 Supercooled water is two of a kind, a new study shows.

Scientists have long suspected that water at subfreezing temperatures comes in two distinct varieties: a high-density liquid that appears at very high pressures and a low-density liquid at lower pressures. Now, ultrafast measurements have caught water morphing from one type of liquid to the other, confirming that hunch. The discovery, reported in the Nov. 20 Science, could help explain some of water’s quirks.

The experiment “adds more and more evidence to the idea that water really is two components … and that that is the reason that underlies why water is so weird,” says physicist Greg Kimmel of Pacific Northwest National Laboratory in Richland, Wash., who was not involved in the study.

When free from impurities, water can remain liquid below its typical freezing point of zero degrees Celsius, forming what’s called a supercooled liquid. But the dual nature of supercooled water was expected to appear in a temperature realm so difficult to study that it’s been dubbed “no-man’s-land.” Below around –40° C, water remains liquid for mere instants before it crystallizes into ice. Making the task even more daunting, the high-density phase appears only at very high pressures. Still, “people have dreamt about how to do an experiment,” says Anders Nilsson of Stockholm University.

Thanks to speedy experimental maneuvers, Nilsson and colleagues have infiltrated that no-man’s-land by monitoring water’s properties on a scale of nanoseconds. “This is one of the major accomplishments of this paper,” says computational chemist Gül Zerze of Princeton University. “I’m impressed with their work.”

The scientists started by creating a type of high-density ice. Then, a pulse from an infrared laser heated the ice, forming liquid water under high pressure. That water then expanded, and the pressure rapidly dropped. Meanwhile, the researchers used an X-ray laser to investigate how the structure of the water changed, based on how the X-rays scattered. As the pressure decreased, the water transitioned from a high-density to low-density fluid before crystallizing into ice.

Previous studies have used ultrafast techniques to find hints of water’s two-faced demeanor, but those have been done mainly at atmospheric pressure (SN: 9/28/20). In the new work, the water was observed at about 3,000 times atmospheric pressure and –68° C. “It’s the first time we have real experimental data at these pressures and temperatures,” says physicist Loni Kringle of Pacific Northwest National Laboratory, who was not involved with the experiment.

The result could indicate that supercooled water has a “critical point” — a certain pressure and temperature at which two distinct phases merge into one. In the future, Nilsson hopes to pinpoint that spot.

Such a critical point could explain why water is an oddball liquid. For most liquids, cooling makes them become denser and more difficult to compress. Water gets denser as it is cooled to 4° C, but becomes less dense as it is cooled further. Likewise, its compressibility increases as it’s cooled.

If supercooled water has a critical point, that could indicate that the water experienced in daily life is strange because, under typical pressures and temperatures, it is a supercritical liquid — a weird state that occurs beyond a critical point. Such a liquid would not be the high-density or low-density form, but would consist of some regions with a high-density arrangement of water molecules and other pockets of low density. The relative amounts of those two structures, which result from different arrangements of hydrogen bonds between the molecules, would change as the temperature changes, explaining why water behaves strangely as it is cooled.

So despite the fact that the experiment involved extreme pressures and temperatures, Nilsson says, “it influences water in our ordinary life.”