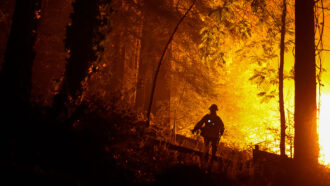 In August, a dry lightning storm over California sparked an intense wildfire that raged through communities in the Santa Cruz mountains. After the CZU Lightning Complex Fire was contained, local officials advised some residents returning to their homes to not use the drinking water. Benzene, a known carcinogen, had been detected in the water supply. The chemical probably was released by plastic pipes that melted during the fire.

Scientists call events like this “natech,” or natural hazard-induced technological disasters. Coined in 1994, the term originally applied to industrial incidents such as chemical or fuel spills that occur after hurricanes, earthquakes and other natural hazards. But natech’s definition has recently expanded, says resilience scientist David Yu of Purdue University in West Lafayette, Ind. It now covers any disaster arising from damage caused by a natural hazard to infrastructure that relies on technology, he says.

That includes disasters involving electricity and water supply. Finding benzene in drinking water after wildfires is a perfect example, Yu says. Natech now also encompasses disasters that have the potential to cause humanitarian crises, like the 2011 Fukushima nuclear reactor disaster in Japan, which was caused by a magnitude 9 earthquake and ensuing tsunami (SN: 3/14/11).

The frequency of natech is increasing worldwide, according to a study in the 2018 Handbook of Disaster Research. More people are moving to coasts and the edges of wilderness areas, places vulnerable to natural hazards, especially hurricanes and wildfires (SN: 11/15/18). It takes power plants, water supply facilities and networks of fiber-optic internet cables to support these growing population centers. With climate change predicted to fuel more frequent and intense hazards, these natural events will collide with vital infrastructure more often (SN: 2/12/20).

Natech usually harms the environment but doesn’t typically cause human deaths or injuries. While the damage is hard to quantify in dollars, the ripple effects are reaching further than ever before, note sociologists Duane Gill of Oklahoma State University in Stillwater and Liesel Ritchie of Virginia Tech in Blacksburg in the Handbook of Disaster Research. That’s because the world is more connected than it was 26 years ago. Natech, the pair write, “reveals the social embeddedness of all hazards, risks and disasters.”