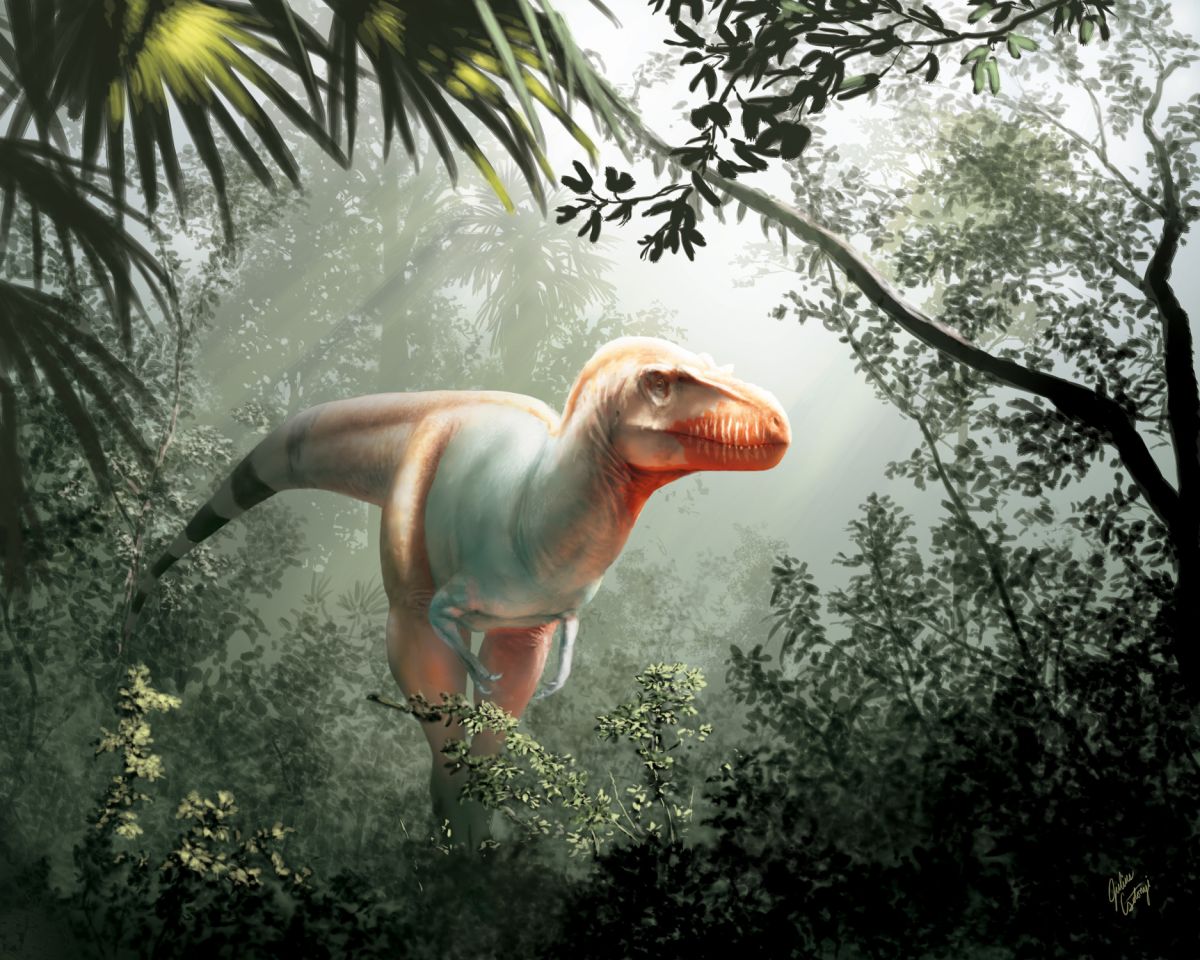 Scientists thought for years that Spinosaurus could swim, but had precious few fossils to prove it. The most complete specimen had been destroyed in an Allied bombing raid against Germany during World War II. But now, the analysis of a Spinosaurus tail reveals that the tail was broad and paddle-like, perfect for a swimmer, according to an April study in the journal Nature.

“This discovery is the nail in the coffin for the idea that non-avian dinosaurs never invaded the aquatic realm,” study lead author Nizar Ibrahim, a paleontologist at the University of Detroit Mercy, said in a statement. “This dinosaur was actively pursuing prey in the water column, not just standing in shallow waters waiting for fish to swim by.”

It’s challenging to know exactly what herbivorous dinosaurs ate — leaves and other plant materials don’t fossilize well, and even if ancient organic matter is preserved, it’s hard to know whether the dinosaur ate it, or if the two fossilized side-by-side by chance.

The discovery of a nodosaur fossil with a well-preserved digestive tract has helped shed light on this mystery. Researchers analyzed the 112 million-year-old beast’s fossilized stomach contents, and learned that the nodosaur, named Borealopelta markmitchelli, was a picky eater, according to the June study in the journal Royal Society Open Science.

The 18-foot-long (5.5 meters) B. markmitchelli ate only certain types of ferns, and apparently it preferred leaves to stems and twigs. The dinosaur also had pea- to grape-size stones, known as gastroliths, in its gut that likely helped it break down food.

Before the long-necked titanosaur dinosaurs got huge, they were wee babes with … a horn?

The discovery of a rare titanosaur embryo in Argentina revealed that this little tyke had a rhino-like horn on its snout, which it lost by adulthood, an August study in the journal Current Biology found.

No word yet on whether its enormous parents thought this little babe’s horn looked cute 80 million years ago, but at least the horn was handy — it’s possible the baby used it to peck out of its shell.

Speaking of eggs, the first dinosaur eggs may have had soft shells, a June study in the journal Nature found. Researchers found ancient eggs from two dinosaur species — the horned dinosaur Protoceratops, which lived during the Cretaceous period, and the long-necked sauropodomorph Mussaurus that lived during the Triassic period.

In a separate Nature study, another group of scientists in Antarctica found the 68 million-year-old soft-shell egg of a mosasaur, which is not a dinosaur but a reptilian sea monster that lived during the dinosaur age.

It’s still a mystery whether this football-size mosasaur egg was laid and hatched in the water, or on dry land like a turtle.

Tyrannosaurus rex has a newfound cousin with a fearsome name — the “reaper of death,” which hails from what is now Alberta, Canada. This 79.5 million-year-old beast (Thanatotheristes degrootorum) is the oldest named tyrannosaur on record from North America. It’s also the first newly named tyrannosaur from Canada in 50 years. (Congrats, Canada!)

“It definitely would have been quite an imposing animal, roughly 8 feet (2.4 meters) [tall] at the hips,” Jared Voris, a doctoral student of paleontology at the University of Calgary in Alberta and lead researcher of the study, told Live Science in February.

The “reaper of death” had unique vertical ridges that ran from its eyes along its upper snout. Scientists aren’t sure why the carnivore had these ridges, but if you were its prey, they were possibly one of the last things you saw before the reaper finished you off.

6. The dinosaur that wasn’t

A 99 million-year-old piece of amber from Myanmar (formerly Burma) with a mystery creature’s skull preserved inside made headlines when researchers said it might be the smallest dinosaur on record. This bird-like dinosaur was said to have about 100 sharp and tiny teeth and weigh just 0.07 ounces (2 grams), the weight of two dollars bills.

However, other specimens of this animal have now been analyzed further, and it appears that it’s not a dinosaur, but a lizard. As a result, the original study was retracted.

Even so, the researchers of the retracted study are still excited to celebrate this weird beastie. “It’s just a really weird animal and an important discovery regardless of whether it’s a weird bird or a weird lizard with a bird head,” study co-lead researcher Jingmai O’Connor, formerly a senior professor of vertebrate paleontology at the Chinese Academy of Sciences, who is now at the Field Museum of Natural History in Chicago, told Live Science in July.

Read more: Trapped in amber, this could be the smallest dinosaur ever found and Hummingbird-size dinosaur may actually be a lizard

The only two tyrannosaur embryos on record are now being studied, and gosh are they small. This apex predator started out with a skull the size of a mouse.

The fossils of these wee babes include a toe claw found in Alberta, Canada and a jawbone unearthed in Montana.

“These are incredibly rare finds — the first of their kind in the world,” lead researcher Gregory Funston, a paleontologist at the University of Edinburgh in Scotland, told Live Science in October. “Juvenile tyrannosaurs of any kind are exceedingly rare, and we’ve never found any bones that we suspected might be embryos, until now.”

Unfortunately for Nanotyrannus, 2020 brought two studies saying it was a teenage rex. In a January study in the journal Science Advances, researchers studied two well-known tyrannosaurus specimens, nicknamed Jane and Petey. A bone analysis found that Jane and Petey were just 13 and 15 years old, and that their bones were growing quickly, just like a teenager’s would.

The second study, published in June in the journal PeerJ, took an intense look at 44 different T. rex individuals and analyzed the species’ growth stages. The teenage T. rexes fit perfectly into the growth curves, indicating that Nanotyrannus is a T. rex, not a separate species.

Two famous dinosaur fossils are finally being studied by scientists. The so-called “Dueling Dinosaurs,” the fossils of the most complete Tyrannosaurus rex and Triceratops on record, which may (or may not) have been dueling at the time of their deaths, are going to the North Carolina Museum of Natural Sciences (NCMNS) following a $6 million deal in November.

Amateaur fossil hunters in Montana discovered the “Dueling Dinosaurs” in 2006, but couldn’t find a buyer. The fossils also failed to sell at a 2013 auction. And then, a lawsuit dogged the discovery, with the land’s previous owners claiming the fossils were theirs.

But now, the 67 million-year-old Dueling Dinosaurs are getting an extraordinary exhibit that will invite the public and students to get involved as scientists slowly learn about the dinosaurs encased in stone.

A newly discovered duck-billed dinosaur named Ajnabia odysseus was found where it shouldn’t have been. Its fossils were unearthed in Morocco, a November study found. “It was completely out of place, like finding a kangaroo in Scotland,” study lead researcher Nicholas Longrich, a paleontologist at the University of Bath, said in a statement.

Duck bills evolved in North America and later made their way to South America, Asia and Europe. But Africa was an island continent 66 million years ago during the late Cretaceous, when A. odysseus was alive. So, how did it get there?

Did the pony-size A. odysseus raft to Africa on debris? Did it float or possibly swim there? Your guess is as good as ours!

Read more: The fossil of a duckbill dinosaur has been found on the ‘wrong’ continent