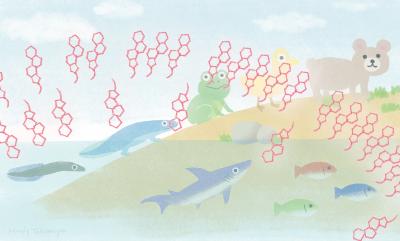 Almost four decades of research have led scientists at Japan’s Institute for Integrated Cell-Material Sciences (iCeMS) to propose that a family of transporter proteins has played an important role in species evolution. One protein in particular, called ABCA1, was likely crucial for vertebrate evolution by helping regulate when signals involved in cell proliferation, differentiation and migration enter a cell. This process was necessary for vertebrates to develop into more complex organisms with sophisticated body structures.

The ATP-binding cassette proteins (ABC) are very similar across species, including in bacteria, plants and animals. There are different types of ABC proteins with different transportation roles, importing nutrients into cells, exporting toxic compounds outside them, and regulating lipid concentrations within cell membranes.

iCeMS cellular biochemist Kazumitsu Ueda has studied human ABC proteins for 35 years, ever since he and his colleagues identified the first eukaryote ABC protein gene.

“We believe ABC proteins must have played important roles in evolution,” Ueda says. “By transporting lipids, they enabled plants and animals to thrive on land by protecting them from water loss and pathogen infection. They are also assumed to have accelerated vertebrate evolution by allowing cholesterol to function as an intra-membrane signalling molecule.”

Organisms that existed early in Earth’s history were probably formed of DNA and proteins surrounded by a leaky lipid membrane. As the organisms evolved, their membranes were fortified to protect them from the external environment. But this meant only organisms that evolved special ABC transporters capable of carrying nutrients across the membrane survived. The ABC proteins also played important roles in generating an outer membrane that protected cells from external stresses and in removing harmful substances from inside.

Recently, Ueda and his team studied the roles of ABCA1, gaining deeper insight into how it regulates cholesterol. Specifically, they found that ABCA1 exports cellular phospholipids and cholesterol outside the cell for generating high-density lipoproteins, popularly called good cholesterol.

They also found that ABCA1 constantly flops cholesterol from the cell membrane’s inner leaflet to its outer leaflet, maintaining a lower concentration on the inner side. This flopping is temporarily suppressed when the cell is exposed to an external stimulus, like growth hormone. The resultant accumulation of cholesterol in the inner leaflet triggers the recruitment of proteins to the membrane and modulates the signal transduction. Ueda and his team suggest that ABCA1 allowed vertebrates to evolve complicated biological processes and sophisticated bodies.

“ABCA1 is very unique and its functions surprised us,” says Ueda. “Cholesterol’s role was thought to focus mainly on physically strengthening the cell membrane and reducing its permeability to ions. Our research suggests it played a more important role in vertebrates, accelerating their evolution.”

At iCeMS, our mission is to explore the secrets of life by creating compounds to control cells, and further down the road to create life-inspired materials.
https://www.icems.kyoto-u.ac.jp/