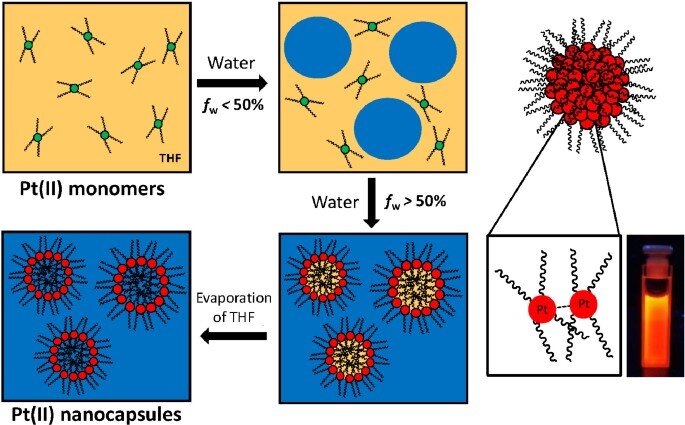 Researchers from the Complutense University of Madrid (UCM) and the NOVA University of Lisbon (UNL) have used platinum (Pt) compounds of a liquid crystalline nature to design nanocrystal structures capable of effectively encapsulating and transporting water-insoluble drugs that are otherwise difficult to administer.

The study, published in Nano Research, shows that besides their applications in bioimaging techniques as phosphorescent markers, the new Pt(II) nanocrystals may also have an application in biomedicine: to encapsulate water-insoluble drugs.

Such hydrophobic drugs include some anti-tumor therapies, which are difficult to administer because of their poor solubility in water, rendering it necessary to increase the dose in order to achieve the desired therapeutic effect, which also increases toxicity and side effects in the patient.

“In order to eliminate these problems, we strategically designed Pt(II) nanocrystals with ideal structural characteristics that make them excellent candidates for encapsulating and transporting water-insoluble substances,” explained Mercedes Cano, the principal investigator of the MatMoPol Group in the Department of Inorganic Chemistry at the UCM.

Cristián Cuerva, who was a researcher in the Department of Inorganic Chemistry at the UCM when this area of research was launched and is now at the UNL, revealed that “the presence of extended alkyl chains oriented towards the exterior of the nanocrystals facilitates their stable dispersion in water,” adding that “those located towards the interior favor the retention of hydrophobic substances within the internal cavity.”

To carry out the study, the researchers prepared the new luminescent Pt(II) nanocrystals inside small spherical emulsions formed by mixing water with an oily solvent.

Subsequent evaporation of the solvent creates an internal cavity that is totally isolated from the aqueous medium and presents the ideal characteristics to encapsulate hydrophobic drugs.

The encapsulation assays were carried out using coumarin 6 (C6), a luminescent compound that is practically insoluble in water, as a hydrophobic substance model. Subsequent analysis revealed the presence of C6 inside the nanocrystals, achieving a high encapsulation efficiency of up to 79%.

From LCD to nanocapsules

One of the major revolutions in liquid crystals was their use in LCD screens on tablets, ebooks, laptops and digital watches, although they may now be displaced by OLED systems, which offer better performance.

“In recent decades, precisely when many people thought that liquid crystals had “reached the ceiling,” we have found that these materials possess and enhance additional properties such as phosphorescence and conductivity, paving the way for new technological applications in the fields of luminescent sensors and electric batteries. By using nanoscience and nanotechnology, we have now demonstrated that liquid crystals could also be of great use in the field of biomedicine,” concluded Cuerva.

Smarter drug release thanks to control over encapsulation

Citation:
The applications of liquid crystals have been extended to drug encapsulation (2020, November 6)
retrieved 8 November 2020
from https://phys.org/news/2020-11-applications-liquid-crystals-drug-encapsulation.html