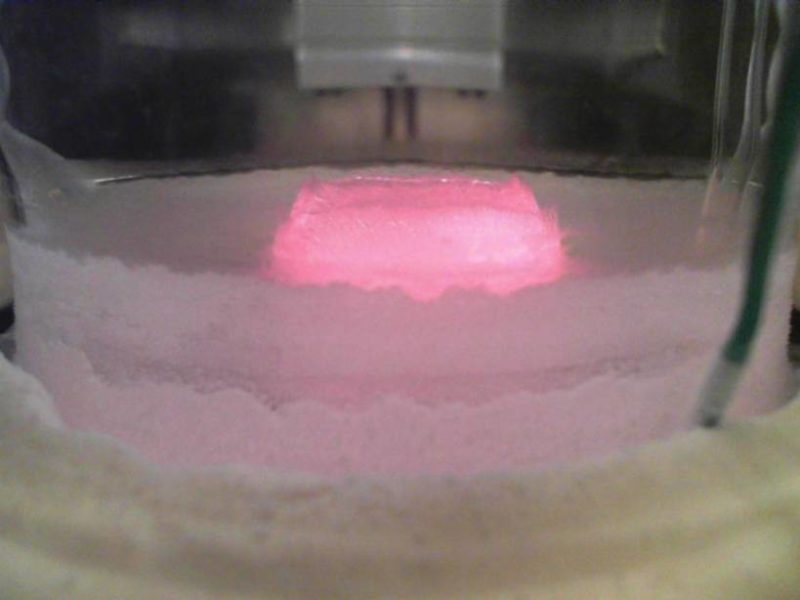 A new device used to extract gas trapped in ice cores by sublimation will shave hours off the time needed by previous versions of the technology. It will use a light source with a more suitable wavelength, which will rotate around the ice sample.

“Ice cores contain actual samples of the past atmosphere,” said Michael Dyonisius, who is developing the new device at the University of Copenhagen and presented its features at AGU’s Fall Meeting this past December. The relative amounts of different gases, and of the isotopes of their constituent elements, help to build a picture of conditions on Earth thousands and even hundreds of thousands of years ago.

The oldest method for extracting air from ice cores is to melt the ice and let the air bubble up. But melting can lead to skewed measurements for some gases, Dyonisius noted, including carbon dioxide (CO2). “Because CO2 is soluble, it will go into the water base, and there it can react with carbonates in dust in the ice. It will reach an equilibrium, and the bubble will no longer represent the original air from the atmosphere.”

Ice cores from Greenland, which is closer to other landmasses than Antarctica is, are particularly vulnerable. For such dusty ice, the traditional solution has been to tumble a sample in a metal grater. But the steel of the grater may release some CO2 as it is hit by the ice, and if the sample becomes too light, it stops shedding ice entirely. “So you don’t get complete extraction,” Dyonisius said.

In 1989, A. T. Wilson and D. J. Donahue developed an extraction method that uses sublimation, the direct transition of a substance from solid to vapor. For ice, this happens with the right combination of the temperature of the sample and the pressure of water vapor over it. The water vapor and any air from the ice go through a number of cold traps to separate them. According to Dyonisius, sublimation “is arguably the cleanest” method for extracting gas from ice cores, “especially for trace gases that are highly reactive, like CO2 and methane, the two most important greenhouse gases.”

The new system will cut the time to analyze a sample from 10 to 4 hours.At present, a device at the University of Rochester, where Dyonisius worked until recently, is used to measure the radioactive isotope of carbon-14. The University of Bern has a device that measures carbon-12 and carbon-13, the element’s stable isotopes. The new machine in Copenhagen will measure methane.

In contrast to the Rochester and Bern machines, the Copenhagen machine will use lamps with a hotter filament temperature and thus a shorter peak wavelength to keep the process going. The higher-temperature lamps offer good energy delivery to the ice, coupled with less absorption by the glass of the vessel that holds it. 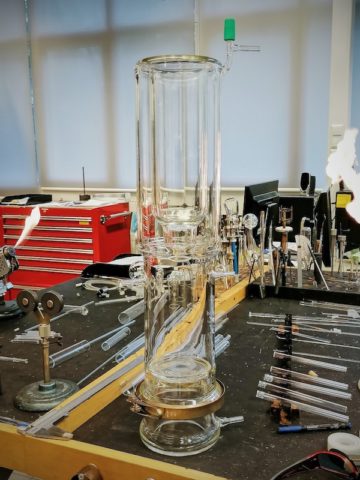 This tool developed at the University of Copenhagen will use lamps with a hotter filament temperature than previous tools in the process of sublimation to cleanly extract gases from ice cores. Credit: Jochen Schmitt

“With the other lamps, something like 5% of the energy actually goes into sublimating the ice,” Dyonisius explained. “And because it is so inefficient, it is very tedious. Each sample takes about 10 hours to sublimate—that’s 10 hours of graduate student manual labor. It’s miserable.”

The new system will cut the time to analyze a 300-gram sample to 4 hours. To prevent local melting, two lamps will be spinning around the sample.

The device is welcomed by Mauro Rubino of the University of Campania Luigi Vanvitelli in Italy. “The apparatus developed provides a new, powerful tool,” he told Eos in an email. “The flip side is that the new apparatus is much more complicated to run than the traditional extraction methods.”

Rubino especially welcomes the fact that the latest sublimation devices can be carried to the drill sites. This not only gets the researchers faster results, but also prevents changes from occurring in the sample during storage.

Other innovations are on the way. In Bern, a team led by Jochen Schmitt is developing a continuous sublimation system. It will use a laser light source to shine on one face of a core and in that way analyze layer after layer. Because each layer is older than the one above it, this new system offers a higher resolution in time than when slices of the core are analyzed in one go.

This system will be used in the European Beyond EPICA (European Project for Ice Coring in Antarctica) project, which aims to drill a continuous ice core from the Antarctic Ice Sheet down to the continent’s bedrock. “If we get 1.5-million-year-old ice,” Dyonisius said, “it’s going to be really compressed, so we need the best resolution.”

High resolution is also on Rubino’s wish list. He would like to see it applied near the tops of ice cores, where researchers have to correct for how they think the atmosphere penetrates down into the snow. “Ideally they would be able to look at the composition of the atmosphere in each single bubble, which would provide a complete understanding of the trapping process of air in ice.”