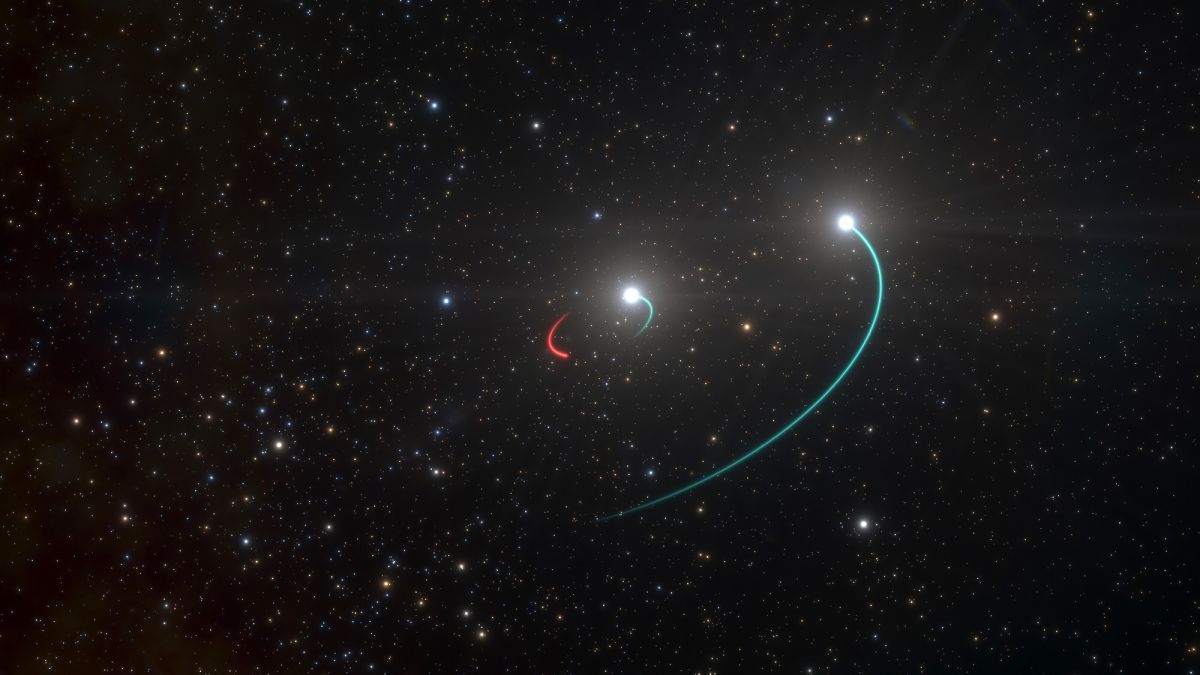 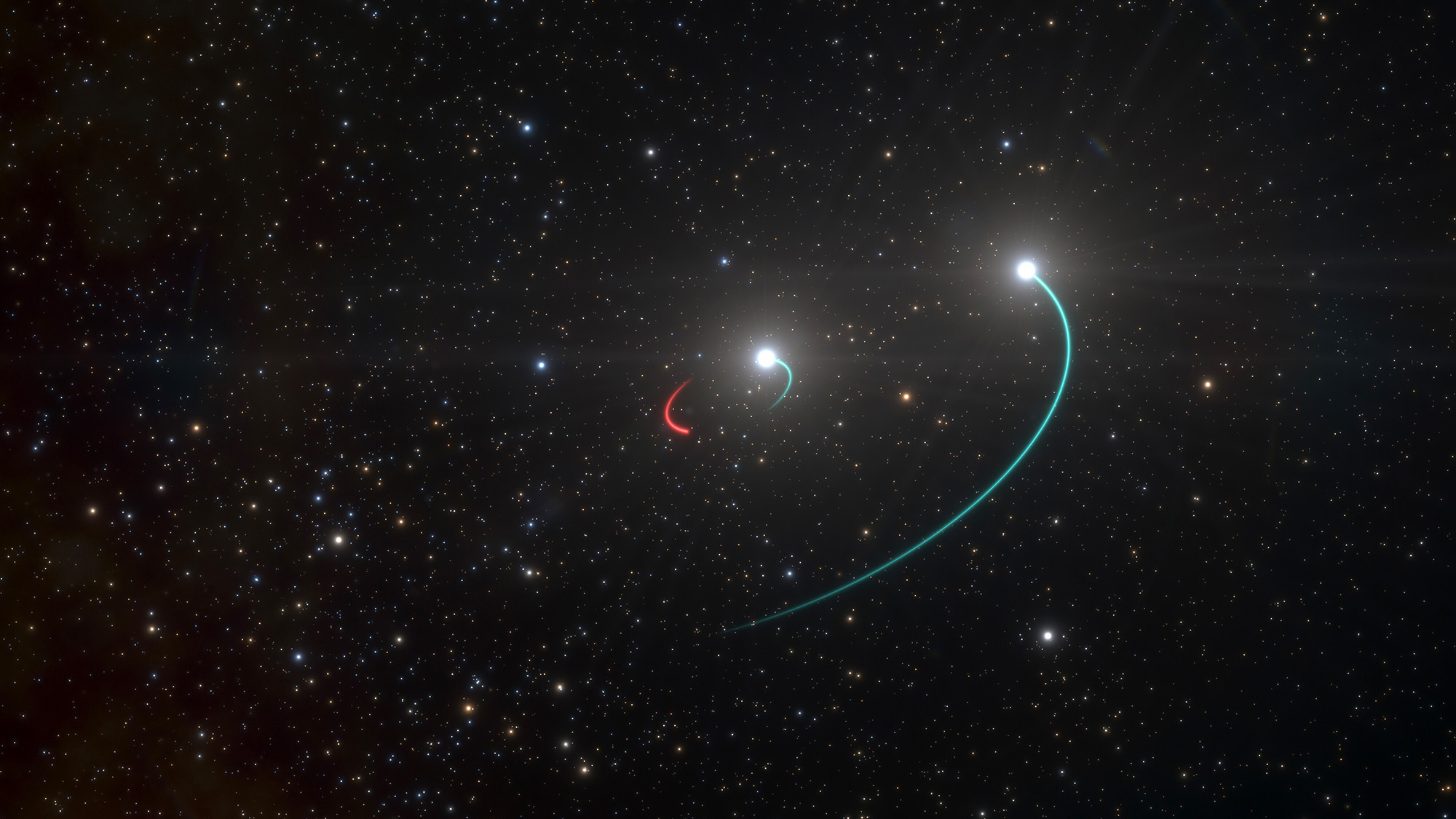 An object identified earlier this year as the closest black hole we’ve ever discovered may have just been demoted. After reanalyzing the data, separate teams of scientists have concluded that the system in question, named HR 6819, does not include a black hole after all.

Instead, they have found that it’s likely just two stars with a slightly unusual binary orbit that makes it difficult to interpret.

HR 6819, located around 1,120 light-years away, has been a bit of a puzzle for some time. Initially, it was thought to be a single star of the Be spectral type.

This is a hot, blue-white star on the main sequence whose spectrum contains a strong hydrogen emission line, interpreted as evidence of a disc of circumstellar gas ejected by the star as it rotates at an equatorial velocity of around 200 kilometers per second.

In the 1980s, astronomers noticed that the object seemed also to be exhibiting the light signature of a second type of B-type star, a B3 III star. This was found in 2003 to mean that HR 6819 was not one, but two stars, although they could not be individually resolved.

Further analysis revealed that the B3 III star, clocking in at an estimated 6 solar masses, had a roughly 40-day orbit – but the Be star, also estimated to be around 6 solar masses, seemed to be motionless. If the two stars comprised an equal mass binary, they should orbit a mutual centre of gravity, not one star orbiting the other.

After conducting careful calculations, a team of astronomers concluded that the B3 III star could be orbiting another, third object, one that couldn’t be seen. A black hole.

But, other astronomers argue, that’s far from the only possibility. What if we have miscalculated the masses of the stars?

“The presence of a Be star component in the spectrum of HR 6819 suggests another interpretation of the system,” wrote astronomers Douglas Gies and Luqian Wang of Georgia State University in their paper.

“It is possible that the B3 III stellar component is actually a low mass, stripped down star that is still relatively young and luminous. In this case, the Be star would be the companion in the 40-day binary instead of a black hole.”

In other words, the much lower-mass B3 III star would whizz around the Be star. If this were the case, that orbital motion could be detectable in the hydrogen gas surrounding the Be star – it would move almost imperceptibly as it was tugged by the smaller star. This is what Gies and Wang went looking for.

They carefully studied the hydrogen emission in the system’s spectrum, and found that the hydrogen disc around the Be star did indeed display a 40-day periodicity in both Doppler shift and emission line shape. This is consistent with the B3 III star’s orbit – just as would be expected if the system were an unequal-mass binary.

“This indicates,” they wrote, “that HR 6819 is a binary system consisting of a massive Be star and a low-mass companion that is the stripped down remnant of a former mass donor star in a mass transfer binary.”

In other words, the Be star slurped up a whole bunch of material from the B3 III star, leaving it much smaller. There is, the team noted, recent evidence that suggests many Be stars are the product of this process. According to their calculations, the Be star would be about 6 solar masses, as previously found; but the B3 III star would be between 0.4 and 0.8 solar masses.

But it gets more interesting. Gies and Wang were not the only researchers looking into this idea. In a second paper, a team of astronomers led by Julia Bodensteiner of KU Leuven in Belgium independently examined the hydrogen emission of the Be star, and performed an orbital analysis of the system. She and her colleagues came to almost exactly the same conclusion.

“We infer spectroscopic masses of 0.4 [solar masses] and 6 [solar masses] for the primary and secondary,” they wrote in their paper. “This indicates that the primary might be a stripped star rather than a B-type giant. Evolutionary modelling suggests that a possible progenitor system would be a tight B+B binary system that experienced conservative mass transfer… In the framework of this interpretation, HR 6819 does not contain a BH.”

And, in a third paper, currently in preprint, astronomers Kareem El-Badry and Eliot Quataert of UC Berkeley also independently analysed the system’s spectra, obtaining masses of 0.47 and 6.7 solar masses for the B3 III and Be stars respectively.

“We argue that the B star is a bloated, recently stripped helium star with mass ≈ 0.5 solar masses that is currently contracting to become a hot subdwarf,” El-Badry and Quataert wrote.

“The orbital motion of the Be star obviates the need for a black hole to explain the B star’s motion. A stripped-star model reproduces the observed luminosity of the system, while a normal star with the B star’s temperature and gravity would be more than 10 times too luminous.”

So the future looks grim for the black hole interpretation, although it’s not settled quite yet. Future observations could help resolve any lingering questions. But, Gies and Lang argue, the binary system could be more interesting than a black hole.

“The luminous and low-mass companion in the HR 6819 system may represent a rare and important case in which the companion has recently completed mass transfer and has yet to descend to the white dwarf cooling stage of evolution,” they wrote.