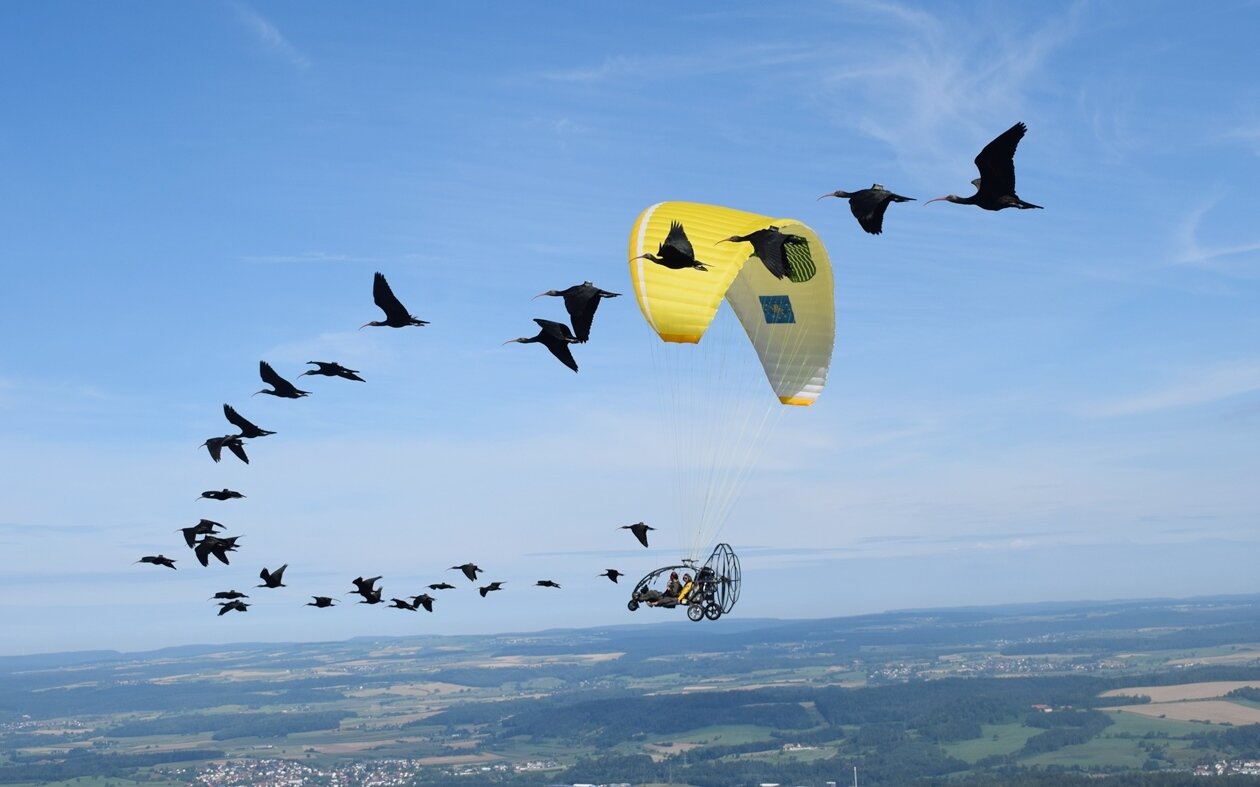 Migratory birds flying south provide an impressive example of cooperative behavior that saves power and energy. In the past, it was impossible for scientists to study this phenomenon in a natural environment. Researchers who guided young northern bald ibises to their wintering grounds have now succeeded for the first time in obtaining a comprehensive data set. A better understanding of this behavior is also of fundamental importance in respect of climate change.

The precise alignment of migratory birds flying south in V-formation is a notable phenomenon. Not only is it visually impressive, this flight formation is also a special example of cooperative behavior in the animal kingdom. Up to now, however, the only possible approximation to the phenomenon was through using mathematical models and simulations, because the necessary empirical data could not be collected using wild migratory birds. With a view toward the energy efficiency of this migration, many research questions remained unanswered, including how it actually works or how much energy the birds save in the process. The function of the lead bird, which flies ahead and therefore—or so ran the hypothesis—benefits least from formation flight, was particularly puzzling.

“In a preliminary study, we found that the birds take turns, but assumed a rather static system with a lead bird. In the current research project we now observed something a lot more dynamic than expected. Each bird took on the role of both leader and follower, which means that everyone benefits,” biologist Johannes Fritz explains. He is an expert on the acutely endangered northern bald ibis (Waldrapp in German), founder of the Waldrappteam and project manager of Reason for Hope, Europe’s largest species conservation project, which is scheduled to run until the end of 2021.

In 2018 and 2019, the research team guided two groups of young birds on their first migration from a breeding colony in the German town of Überlingen on Lake Constance to their wintering grounds in southern Tuscany, the WWF Oasi Laguna di Orbetello. Flying with the birds in an ultralight aircraft, the researchers performed the function of lead bird, which was necessary because it was the premiere of migratory flight for these young birds. This is the only way to reintroduce the northern bald ibis, which is extinct in Europe, into the wild. In addition, climate change is increasingly impinging on migratory birds, which is why research into migratory flight is of great importance for European species conservation. “The more we know about migration and energy efficiency, the better. It will become increasingly important to be able to model the migratory behavior of species accurately and adapt it to changing environmental conditions,” Fritz notes.

In this context, cooperation skills between individuals play a key role in determining the survival of the individual bird as well as that of the entire population. The first migration is particularly risky for young birds: If a young Ibis loses contact with its flock and is unable to join any other group, it is condemned to certain death. While it was known in principle and from theoretical models that formation flight saves energy, researchers did not know how it works and how much energy a bird actually saves.

“Energy efficiency is an extremely important factor for the survival rate. It is truly fascinating to find out how complex the energy-saving demands on the individual are,” explains Fritz. From the question of how the data is collected to analysis of the data, the researchers had to break new ground several times. For this reason, the team includes two Ph.D. students from Italy and Israel as well as partners from research institutes at the Vienna University of Veterinary Medicine, the University of Vienna, the Joanneum University of Applied Sciences in Graz and the University of Berne. The two groups of thirty young birds each were raised by humans. This made it possible to equip them with the technology needed for data collection. The journey from Überlingen to Tuscany took two weeks. A total of around 1,000 kilometers was covered in just six or seven flying days, involving crossing the Alps and the Apennines and reaching flight altitudes of up to 2,900 meters.

The exact position of one individual in relation to the others—is it flying ahead or behind?—is a key aspect in researching energy efficiency. All individuals were therefore equipped with extra-lightweight data loggers. Every day, the researchers mounted the devices on the birds and took them off again.

“The data logger does not transmit data, but stores it. It was particularly challenging for us to achieve the extremely high precision to the nearest few centimeters,” Fritz reports. The feat was made possible by access to three global satellite navigation systems (GPS, Galileo, GLONASS). A bird only saves energy if it flies at a certain distance from the bird in front and also precisely synchronizes its wing beat. Therefore, a motion sensor in the data logger continuously measures both the wing-beat frequency and the position of the wing. The researchers also measured the heart rates of four birds via electrodes to find out how much energy the individual saves in the process. In order to be able to relate the heart rate to energy expenditure (the metabolic rate) which is measured via the air breathed, it was necessary to calibrate these two values under laboratory conditions. In a specifically developed wind tunnel, the scientist foster parents of four separately reared young birds collected data on this issue.

In the course of the two migrations, the team collected a comprehensive and novel set of data. “We are currently busy with evaluation of the data. We assume that the energy savings will be between 15 and 30 percent. This is considerable, especially for inexperienced young birds with lower performance capabilities,” Fritz emphasizes. With the help of this empirical database, human-guided migration can be further improved, thereby optimizing the protection of migratory bird species. One question remains: Is this cooperative behavior something the birds have in their genes or is it the result of learning-by-doing? Apparently, cooperation skills are the result of a development process: “During the training flights, they were still a motley crew. When they got into the spirit for migration, they seemed to recognize the seriousness of the matter and began to fly in formation. With each stage of the flight, cooperation became better,” notes Fritz as he recalls his fascinating experience of having served as “lead bird.”

A tale of two seasons: climate drives winter migration in birds but not the return to breeding sites