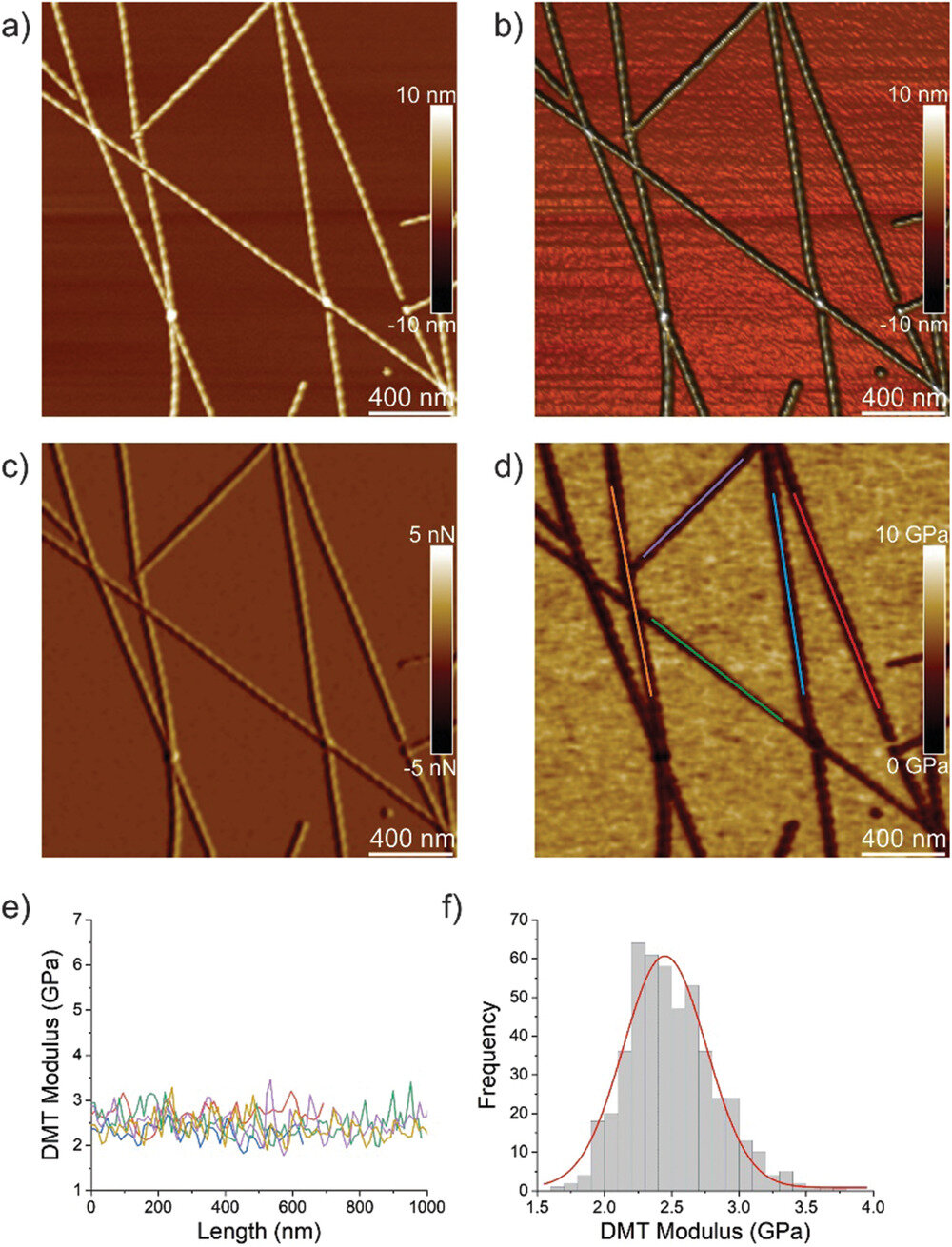 Amyloids refer to abnormal fibrous extracellular and proteinaceous deposits found in organs and tissues that form insoluble constructs that are resistant to degradation. Their formation can accompany disease, where each disease is characterized by a specific protein or peptide aggregate. The nanomechanical properties of amyloid fibrils and nanocrystals depend on their secondary and quaternary structure and intermolecular geometry. Scientists have used advanced imaging methods including atomic force microscopy (AFM) to unravel the morphological and mechanical heterogeneity of amyloids, although it is difficult to obtain a full understanding based on conventional spectroscopic methods.

In a recent report now published on Advanced Science, Jozef Adamcik and an international team of researchers at the ETH Zurich, the University of Cambridge, the University of Luxemburg and the Shanghai University, demonstrated combined single molecule nanospectroscopy methods. They combined the techniques with atomic modeling to understand the structural transition of amyloid fibrils to amyloid microcrystals based on hexapeptides at the nanoscale. They credited the origin of stiffening to an increased content of intermolecular β-sheet structures. The increased stiffness in Young’s moduli correlated with increased density of intermolecular hydrogen bonding and parallel β-sheet structures to energetically stabilize the crystals.

Amyloids are highly ordered structures arising from proteins or peptides and associated with a range of diseases including numerous neurodegenerative disorders such as Alzheimer’s, Parkinson’s, Creutzfeldt‐Jakob diseases, and bovine spongiform encephalopathies. Understanding their biophysical properties can provide plenty of new information to inhibit their formation. In materials science, however, the ability of a large number of peptides and proteins to self-assemble into amyloid structures opens up a method to use them to develop new nanomaterials for biomedical and nanotechnological applications. As a result, materials scientists are keen to obtain detailed knowledge of the structure and morphology of amyloids in a broader context for applications across medicine to nanotechnology. In this work, Adamcik et al. examined the polymorphism of the hexapeptide model systems and used the single molecule capabilities of peakforce quantitative nanomechanical mapping atomic force microscopy (PF-QNM-AFM) for the analysis. The method combined AFM (atomic force microscopy) and infra-red techniques with atomic modeling to study and correlate the nanomechanical, chemical and structural properties of the fibril and its crystal forms at the scale of a single aggregate.

The team first analyzed ILQINS hexapeptides (an amyloid forming segment) individually to understand the difference in nanomechanical and structural properties. They extracted the Young’s moduli of around 30 different fibrils with values (2-3 GPa) typical for amyloid fibrils. They then observed another hexapeptide IFQINS – another amyloid forming segment, to show the co-existence of fibrils with a structure of right-handed helical ribbons, right-handed and left-handed twisted ribbons, intermediate crystals and crystals. In this instance, the Young’s moduli were different, and allowed the researchers to distinguish each structural morphology. For example, the fibrils shown in red had Young’s moduli in the 2-3 GPa range much like fibrils self-assembled from ILQINS. For crystals depicted in blue, the moduli were in the range of 5-6 GPa, while intermediate crystals seen in green were spread across 2-5 GPa. Additionally, the TFQINS amyloid structures self-assembled into microcrystals with a small number of twisted ribbons, with similar trends to IFQINS hexapeptides. The team also obtained detailed analysis of the Young’s moduli of a fibril-to-crystal transition of TFQINS.

Adamcik et al. then applied infrared (IR) spectroscopy to further understand the correlation between nanomechanical properties and the chemical secondary structure heterogeneity of single fibrils and crystals. They selected the IFQINS peptides for the experiments with the AFM-IR tool due to its heterogeneity. The scientists observed morphology maps using the technique to show the co-existence of twisted fibrils and crystals at the nanoscale. The AFM-IR system allowed the spectroscopic resolution of the amide bands that are typically known as fingerprints of proteins or peptides. The scientists investigated the subtle structural changes during the transition from the fibrillar to the intermediate crystal to the crystal state, to indicate a net increase of intermolecular parallel β-sheet content and a slight increase of antiparallel β-sheet conformation. The team credited the outcome to the increased Young’s modulus from the fibril to the crystal states, where the IR-spectroscopy method and AFM indentation provided a synopsis of the atomic-scale organization.

The researchers next conducted atomistic simulations of the indentation process to further investigate the changes in amyloid material properties after acquiring the crystal-like order. They used ILQINS peptides for these simulations to understand versions of thick and thin amyloid models. The thin structure had a less compact backbone compared to the thick structure. The Young’s moduli of crystals exceeded those of twisted amyloids by 3.6 GPa to show the ordering of crystals to be greater than fibrils, much like with experimental indentation. Taken together, the results showed fibril-to-crystal transition in amyloid to be associated with increased intermolecular β-sheet and hydrogen bonding that resulted in the shift of the amide I band to lower vibrational frequencies. This shift allowed the crystal structure to become stable based on vibrational entropy and long-range order of H bonds. The work provided a clear process of fibril-to-crystal transitions to form exceptionally stable amyloid-like crystals.

In this way, Jozef Adamcik and colleagues combined single molecule atomic force microscopy imaging, nanoindentation and nanoscale chemical spectroscopy with atomic modeling to understand the nanomechanical and vibrational properties of amyloid polymorphs. They observed the transition from fibrils to microcrystals and investigated a series of hexapeptide fragments (including ILQINS, IFQINS, and TFQINS). The amyloid fibrils and microcrystals showed different Young’s moduli, where the amyloid crystals had larger values due to the higher density and order of intermolecular β-sheets in the microcrystal architectures. The work provided an unprecedented map of the atomistic, mesoscopic, and vibrational properties of the amyloid aggregate to elaborate the molecular origins of the thermodynamically stable amyloid crystals for applications across materials science to nanomedicine.