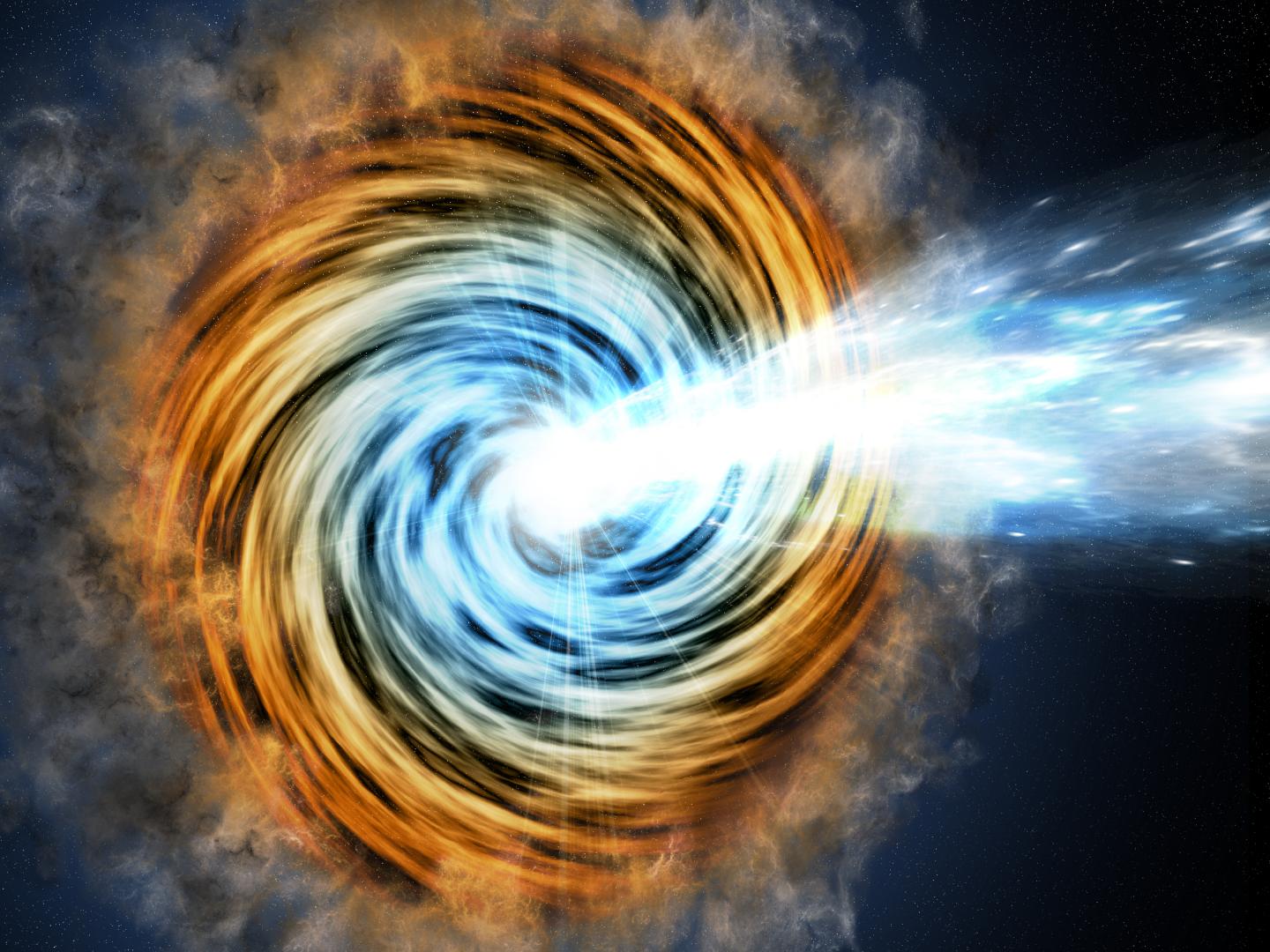 Only a small fraction of the galaxies emits gamma rays, which is the most extreme form of light. Astronomers believe that these highly energetic photons originate from the vicinity of a supermassive black hole residing at the centers of these galaxies. When this happens, they are known as active galaxies. The black hole swallows matter from its surroundings and emits jets or, in other words, collimated streams of matter and radiation. Few of these active galaxies (less than 1%) have their jets pointing by chance toward Earth. Scientists call them blazars and are one of the most powerful sources of radiation in the universe.

Blazars come in two flavors: BL Lacertae (BL Lac) and flat-spectrum radio-quasars (FSRQs). Our current understanding about these mysterious astronomical objects is that FSRQs are relatively young active galaxies, rich in dust and gas that surround the central black hole. As time passes, the amount of matter available to feed the black hole is consumed and the FSRQ evolves to become a BL Lac object. “In other words, BL Lacs may represent the elderly and evolved phase of a blazar’s life, while FSRQs resemble an adult,” explains Vaidehi Paliya, a DESY researcher who participated in this program.

Now, the team of international scientists has discovered a new BL Lac object, named 4FGL J1219.0+3653, much farther away than the previous record holder. “We have discovered a BL Lac existing even 800 million years earlier, this is when the Universe was less than 2 billion years old,” states Cristina Cabello, a graduate student at IPARCOS-UCM. “This finding challenges the current scenario that BL Lacs are actually an evolved phase of FSRQ,” adds Nicolás Cardiel, a professor at IPARCOS-UCM. Jesús Gallego, also a professor at the same institution and a co-author of the study concludes: “This discovery has challenged our knowledge of the cosmic evolution of blazars and active galaxies in general.”

The researchers have used the OSIRIS and EMIR instruments, designed and built by the Instituto de Astrofísica de Canarias (IAC) and mounted on GTC, also known as Grantecan. “These results are a clear example of how the combination of the large collecting area of ??GTC, the world’s largest optical-infrared telescope, together with the unique capabilities of complementary instruments installed in the telescope are providing breakthrough results to improve our understanding of the Universe,” underlines Romano Corradi, director of Grantecan.

The Observatories of the Instituto de Astrofísica de Canarias (IAC) are part of the network of Singular Scientific and Technical Infrastructures (ICTS) of Spain.