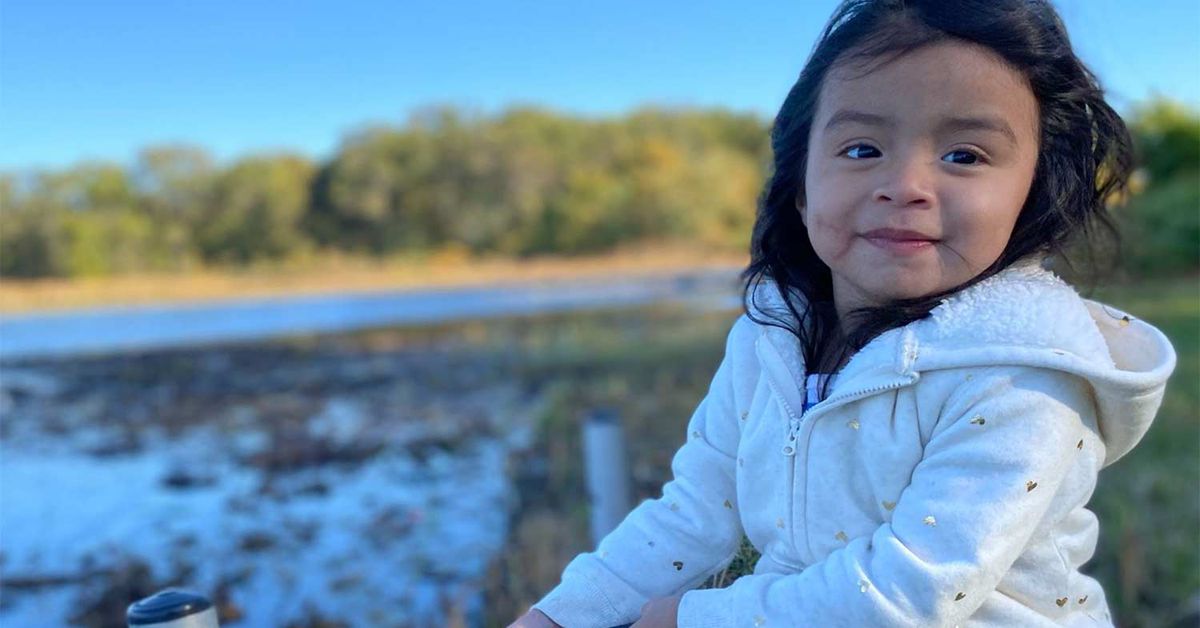 Even at the earliest stages of her fishing life, the author’s daughter already looks like a natural. (Jonathon Klein/)

We’re sitting at the dining room table as my mom recalls my love for fishing and when it started, as if I’d caught my first fish just moments ago. “I can’t remember a time you didn’t have a fishing pole in your hand,” she tells me. “The earliest memories are of Indiana, always Indiana.” My grandmother has a lake house in Indiana, where we had just visited for a vacation. “You loved everything and anything we introduced you to in nature. It was usually Grandma and I, because the three of us spent a lot of time together.”

I can hear the pure joy in her words. I might as well be back in the boat, five years old once again. For my mom, it’s a precious moment—and one that, as an adult, I had hoped to emulate with my children.

But what if a good memory doesn’t stay that way? I’m not talking about the elation of watching a child hook and fight their first fish only for the moment to end in tears after the fish gets away. Rather, instead of my mother’s joy from a memory that she’s cherished for the rest of her life, I faced the possibility of heartache as walked toward the same Indiana lake where I learned to fish with my two-year-old daughter, Gigi, fishing rod in her hand, and her brother, Milo, trailing just behind us.

Would this be a moment that I would, one day, look back on fondly? Or would it be a painful memory of a life snatched away?

Our foster-care journey began three years prior. After seven years of perplexed doctors and ludicrous copays and tests, my wife and I had gone to an informational meeting for California’s Foster-to-Adopt program. We left with the paperwork to become foster parents. We couldn’t have known what was in store for us just a short time later.

When you sign up to be foster parents, it comes with all the joy of becoming a parent—a parent with every intention to adopt a child—only to receive a cold, indifferent call that your baby, the one you bonded and fell in love with immediately, will be taken from your care. Sometimes from 6,000 miles away, as happened with our first child Parker. Others with the child still in your arms, your tears falling onto their cheeks as you rock them and yourself to sleep, as happened with Teo. And others still, like Gigi, who was placed in our care, removed, returned, and put into legal limbo with no definitive outcome for so long that we welcomed her new baby brother Milo into our care a year-plus after.

There’s nothing that prepares you for foster-to-adopt. Just like there’s nothing that prepares you when becoming a parent. You try, for sure. You read the books and articles; you talk to others involved in the process. You lean on your social workers who remain steadfast in their belief that everything’s all sunshine and roses. It isn’t. It’s not so much a rollercoaster as it is falling down a mountainside—one littered with prickly bushes and sharp rocks. Maybe there’s a rope that’ll arrest your fall. Maybe there isn’t.

And that’s what makes this moment, this first time I decided to take Gigi fishing—to the same spot where I learned how to fish myself, no less—so utterly anguishing. Am I going to have to repress this memory in order to get through the day? Will I regret taking my daughter fishing every time I return here? Will my decision tarnish so many of the good memories I associate with this place?

At the water’s edge, I set down my rod, then string a bobber onto the line of Gigi’s rod and bait a small nightcrawler onto the hook. “Aw, baby worm,” she says innocently. A twinge of guilt runs through me.

She instinctively grabs the rod and starts swinging. I duck for cover as the hook swings near her brother’s face and mine. I get a hold of the rod, and take Gigi in my arms and show her how to open the bail, grab the line, and cast. She makes a short cast, but then, we’re not going for tarpon here. Our sights are set far smaller—bluegills, crappie, and perch, the perfect first quarry for a beginner. And we’re in luck. Almost immediately, the bobber starts to, as Gigi puts it, “Boing, boing-ing.”

The rod is in both of our hands, so we set the hook together. Reeling, though, proves to be a bit of a struggle. Cranking the handle clockwise doesn’t exactly come natural to a two-year-old who’s never fished a day in her life. Gigi grunts and furrows her brow before she ultimately says, “You, Daddy,” handing me the rod to reel in the fish.

I land the fish and bring it into my hands. The light hits the sunfish’s scales perfectly and it reflects onto Gigi’s smiling little face. She coos at its gold, orange, and green colors. As I unhook and get ready to place it into Gigi’s hands, I keep asking myself, Will this stay a good memory?

My wife and I had submitted Gigi and Milo’s adoption paperwork ahead of our time here at my grandmother’s Indiana lake house. Weeks had gone by and nothing was relayed to us. After years of court battles, legal issues, reunification services, and a five-day reunion with her biological family—one that would end with her back in our care after dangerous circumstances—we were once again at the mercy of the state. Close to the finish line, close to the kids being ours forever, close to never feeling helpless, despondent, and vengeful toward the world for once again putting us through what was tantamount to a living nightmare, but still unclear what the future held.

Gigi studies the fish, running her fingers across its colors, touching its fins, and looking into its eyes. I could see that she understood the fish was alive—not a toy, but something to be handled with care. Maybe I’m putting too much into the situation, but she seemed to connect with the fish, and how it came to be in her hands.

I briefly take the fish back and give Milo a chance to check it out. Then Gigi turned to me and said, “Bye, bye, fish. Go back to your mommy!” And with that, I put the fish back into her hands. She gently drops it into the lake, waving goodbye as it swims away.

“I loved to fish, and you loved it as much,” my mom tells me at the end of her recollection of when I first started fishing. “It was wonderful to see you with Gigi and Milo here in Indiana, doing the same thing we did together.”

Three weeks later, I would get an email—three sentences long: “We finally have the adoption order for the Klein family. The adoptions were complete on 9/28/2020. Have a great weekend.” Nothing more. No congratulations, no fanfare, just three sentences. There was, however, relief.

When I walked down the hill toward the lake with Gigi in tow—when I baited her hook and taught her how to case and helped her reel in that first fish—she was already ours. Which means the memory we made, the one I’d been so afraid would betray me, would stay happy memory. A memory that, like the one my mom has of me, I will treasure forever. A memory I can hold onto for the day when my daughter asks, “Dad, when was the first time you took me fishing?”

I can’t wait to tell her.