The new iPad Air is the best tablet for most people 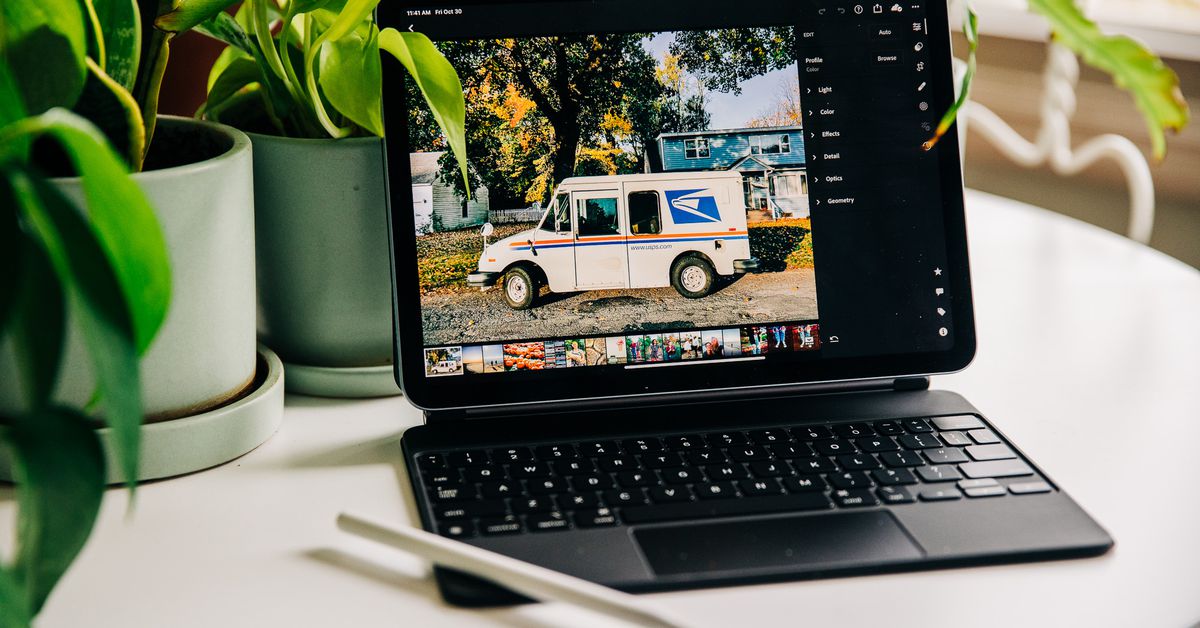 It can be hard to recommend a gadget that lives in the middle of its product line. You don’t get the whiz-bang features from the flagship, but you’re still spending more cash than you would if you bought in at the entry level. In the iPad lineup, the $599 (and up) Air is the middle child. It costs almost twice the price of the $329 vanilla iPad and its feature list doesn’t bring the same kind of bragging rights that come with the $799 Pro. Despite all of that, the iPad Air is, undoubtedly, the best iPad for the vast majority of people if the price difference isn’t a deal-breaker for them.

With the Air, Apple has been smart about what’s included, as well as what’s missing. It picks up the squared-edge design from the Pro, which is great—the curved edges on the standard iPad are still nice, but feel dated in 2020. The Air’s new shape also allows it to fit comfortably into accessories like the $299 Magic Keyboard built for the 11-inch iPad Pro.

The Air’s 2,360 x 1,640,10.9-inch screen has much smaller bezels than its 10.2-inch predecessor, which means more usable display space in a device that’s very similar in size. It looks beautiful. Colors appear punchy and saturated thanks to the wide color gamut, and it’s plenty bright even in situations with a lot of ambient illumination. The anti-reflective coating cuts down on glare to make view ability even better.

The 60 Hz screen does, however, lack the 120 Hz refresh rate found in the Pro. That smooth motion display is one of the Pro’s marquis features. However, switching from the iPad Pro I typically use, I thought I’d miss it a lot more than I actually did. I thought drawing with the Apple Pencil may feel slightly less realistic with a slower screen, but even in direct comparison, I didn’t find that to be the case.

The TouchID sensor is built into the power button on the top of the device. (Stan Horaczek /)

You’ll notice that there’s no home button or FaceID sensor built into the Air. When you log into the device, a sensor in the power button on the top right actually scans your fingerprint using TouchID to grant you access. Getting the fingerprint reader set up took me a few tries—the narrow button doesn’t have much surface area so I had to restart the registration process more than ones. During everyday use, I had to get accustomed to leaving my finger on the button for longer than I typically would. Remove your finger too quickly and it’ll hit you with a “rest to open” message and you’ll have to try again.

Even after getting used to the fingerprint reader, I still prefer the zero-friction FaceID method, but it’s not a deciding factor.

Drawing with the Pencil is fun, but I’m not very good at it. I am, however, tempted to try and get good at it. (Stan Horaczek /)

When it comes to the Pencil, the new Air only works with the later generations of the $129 stylus. The Air has a USB-C port instead of Lightning, so the original Pencil isn’t compatible. Apple has made some considerable jumps in Pencil functionality with the latest version of iPadOS. You can now simply start writing into any text box and it will automatically turn your handwriting into typed text. It recognizes shapes, as well, so you can draw a rough circle and then quickly convert it into a perfect circle with a simple gesture. I have impressively terrible penmanship—my 12th grade English teacher compared it to something you’d find on a “criminal manifesto”—and it has only gotten worse since then. But, iPadOS did a surprisingly good job recognizing my scrawls and it will presumably only get better as it learns.

From a processing perspective, the new Air has the new A14 chip inside, which makes it considerably faster than the typical iPad and slightly below the performance mark set by the Pro. Over the course of my testing, I put the Air through video editing, heavy photo editing, graphics-intensive games, and even some augmented reality, and it didn’t stutter. Even if you’re throwing all of your daily tasks at the Air, speed should never become an issue.

Like the Pro, the Air also supports Wi-Fi 6, which the base model lacks. You’ll need a Wi-Fi 6 router to take full advantage of the connectivity boosts, but even if you’re still living in a Wi-Fi 5 world, the upgraded hardware should provide at least some improvement over the standard iPad model.

The only storage options offer 64 GB in the stock model, or 256 GB for the upgraded version. That bump, however, will cost you an extra $150, which makes it just $50 cheaper than the smaller iPad Pro. A cheaper 128 GB option would have been awesome.

There are new iPad Air colors, including this very subtle blue that looks gray in most light. (Stan Horaczek /)

The camera module on the back of the device isn’t as robust as it is on the Pro. You only get one wide-angle camera as opposed to the Pro’s array, but that has never been an issue for me. If you’re using the iPad camera all the time, it’s worth spending the money to upgrade beyond the Air, but it also may be time for you to reconsider your photographic decision making process. The front-facing camera, however, is excellent, which is important in the era of never-ending video calls. The Air’s FaceTime camera handily beats the MacBook Pro’s built-in option.

Taking all that into consideration, the iPad Air is almost certainly the tablet you should buy. That begs the question, however, do you actually need a tablet in the first place?

Here’s a short list of things I’ve done with the iPad Air since the review unit arrived a few weeks ago:

In other words, the iPad largely served as my “fun screen” for doing tasks outside of my work computer, and I think that’s where it really shines. You can use it to totally replace your laptop, but there are still some instances where you’ll find yourself frustrated. Most of those hiccups happen when you’re trying to multitask. If you’re constantly doing more than one thing at a time, I still think a dedicated computer is going to make your life a lot better.

But, when the iPad Air is more of a creative or entertainment device, it’s amazing. I suck at drawing, but the Pencil makes me want to try. Video editing can still get pretty in-depth, but the iPad’s form factor makes the process seem less intense. Especially now that iPadOS supports more mouse and keyboard features, it’s easier than ever to eschew a dedicated laptop or desktop and go full iPad. It’s just a lot more fun when you don’t put all that pressure on it.