The shortest event ever timed has been measured in zeptoseconds 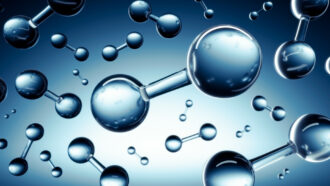 The time it takes for a single particle of light to pass through a hydrogen molecule is now the shortest duration ever measured.

This interval was about 247 zeptoseconds, or trillionths of a billionth of a second, researchers report in the Oct. 16 Science. For comparison, there are as many zeptoseconds in one second as there are seconds in 2,500 times the age of the universe, which is about 13.8 billion years old. The new observation has allowed physicists to witness light-matter interactions at a whole new level of detail.

The physicists shined particles of X-ray light on hydrogen molecules in a gas. As each light particle, or photon, crossed an H2 molecule, it booted an electron from one hydrogen atom, then the other. Because electrons can exhibit wavelike behavior (SN: 5/3/19), the two ejection events stirred up electron waves that spread out and merged — similar to ripples formed by a stone skipped twice over a pond. The overlapping crests and troughs of those waves created an interference pattern, which the researchers observed using an instrument called a reaction microscope (SN: 11/5/10).

If the electron waves had formed simultaneously, the interference pattern would have been symmetric around the center of the H2 molecule. But because one electron wave formed slightly before the other and had more time to spread out, the pattern shifted toward the second wave, says study coauthor Sven Grundmann, a physicist at Goethe University in Frankfurt, Germany.

This shift let the researchers calculate the 247-zeptosecond time delay between the emission of the two electron waves. That matched the team’s expectations based on the speed of light and known diameter of a hydrogen molecule.

Past experiments have observed particle interactions as short as attoseconds (SN: 3/12/10), which are 1,000 times as long as zeptoseconds.