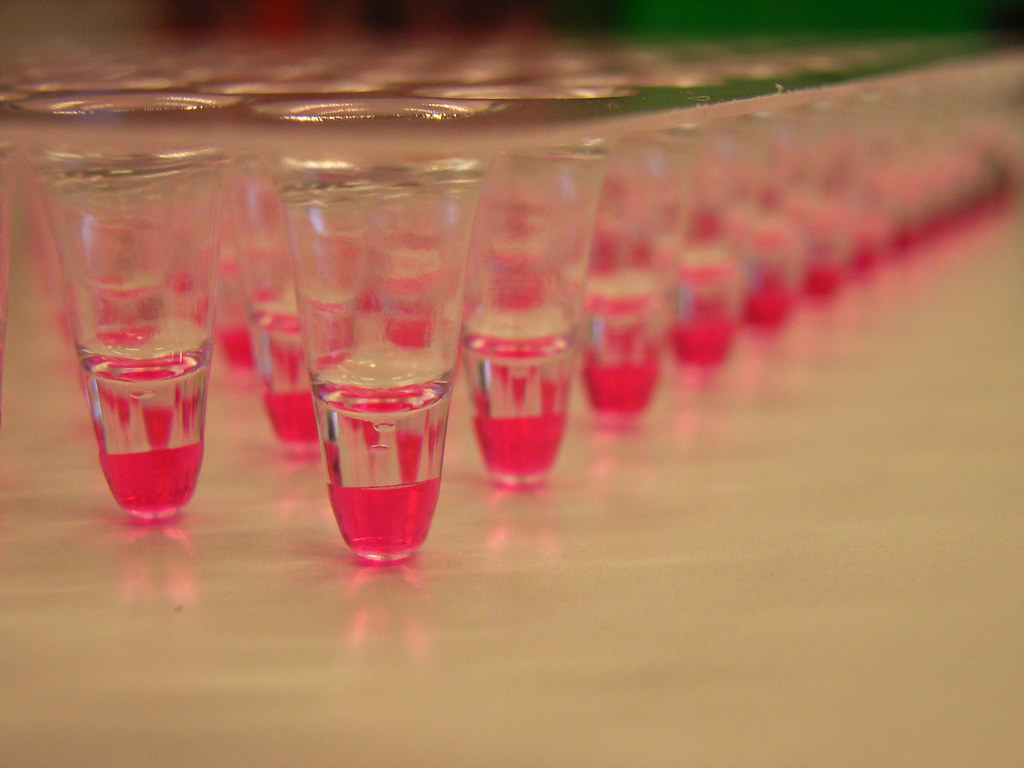 What do gene sequencing, catching criminals with DNA evidence, and “designer babies” all have in common? Forty years ago, these were all considered science fiction topics. Today, they are fields of serious study. All three of these fields, and many more, were made possible by a very important discovery in 1986: a laboratory technique called Polymerase Chain Reactions (PCR). Simply put, PCR is used to make copies of any piece of DNA. But why was this so important?

Polymerase chain reaction, also known as PCR, is a biochemical technique that allows scientists to take a very small amount of DNA from a sample and replicate it very quickly. It actually doubles the amount of DNA with each round of copying, so billions of molecules can be made, theoretically, from just one little piece of DNA in just a few hours.

How did Kary Mullis and his team figure this out?

The team got the idea from how our own cells copy DNA – with a special enzyme called a polymerase and a starting DNA fragment called a primer. When conducting PCR, a scientist heats up a sample, or solution, containing the genetic material of interest. This allows for the two DNA strands to separate from each other, also known as denaturing. Then, researchers added a large amount of these tiny bits of DNA called primers. Primers are bits of DNA that are designed to bind to small sections of DNA that exist at the beginnings and the ends of “regions of interest” in genetic material. DNA has a lot of these primer sequences, mostly at the beginning and end of genes, but they are also scattered throughout DNA.

Then, solutions of all 4 nucleic acids (or genetic bases A, G, T, and C) and a special enzyme (a chemically active protein) is added to the solution and slightly cooled. This type of enzyme “reads” the DNA, and knows to start synthesizing after it reads the primer when it is paired to the original DNA strand.

The original DNA strand is intended to serve as a guide to the enzyme, telling it which nucleic acids should be added next in order to replicate the genetic code. This enzyme works very fast, adding together 2,000-4,000 nucleic acid bases per minute! Once this reaction happens once, the mixture can be reheated to denature the new DNA strands and redone over and over, allowing for an exponential production of genetic material.

Why did it take scientists so long to discover this?

Well, it has to do with that polymerase enzyme used to build the DNA copies. The enzyme came from bacteria that survives in temperatures above 95°C (203°F). That means the enzyme is also heat resistant. This important characteristic of the enzyme is what allows PCR to work in the first place. In the body, the denaturing part happens using other enzymes. But in a test tube, DNA has to be heated in order to open up and make the strands available to be copied. Most polymerase enzymes degrade at the temperatures at which DNA melts apart, so it wasn’t until the discovery of this heat resistant bacteria that the science became possible.

The discovery and use of the Polymerase Chain Reaction made these old synthesis methods obsolete, as it was faster, more accurate, and produced much more genetic material than the previous methods. This allowed scientists to conduct a variety of new experiments and ask questions that could have never been considered before. This was due to the limitations on genetic material synthesis at the time.

Since its introduction in 1986, PCR has revolutionized the field of genetics. Improvements on the enzyme which conducts this chemistry have been made, and has allowed for even faster and more precise synthesis of DNA today. There are now variations on PCR, too, that allow scientists to precisely count DNA molecules. It is used in forensic science, public health, cancer treatment (virtually all medical research), fertility science, paternity testing, gene therapy, and so much more. The Human Genome project was made possible by PCR, not to mention all of the other species on Earth whose genomes we’ve been able to sequence. The most accurate COVID-19 test available is based on PCR. You can even buy a kit to test the genes of your pet thanks to PCR!

As you can see, PCR is everywhere. So, the next time you are watching a true crime show, submit a genetic test, or even go to get tested for COVID-19, remember the humble little lab technique that started it all.

1313900cookie-checkThe simple lab technique that changed everything How the discovery and validation of a simple lab technique called PCR by Kary Mullis and his team in the 1980’s helped science take a leap forward in understanding genetics and improved our society. yes