The strangest medical cases of 2020 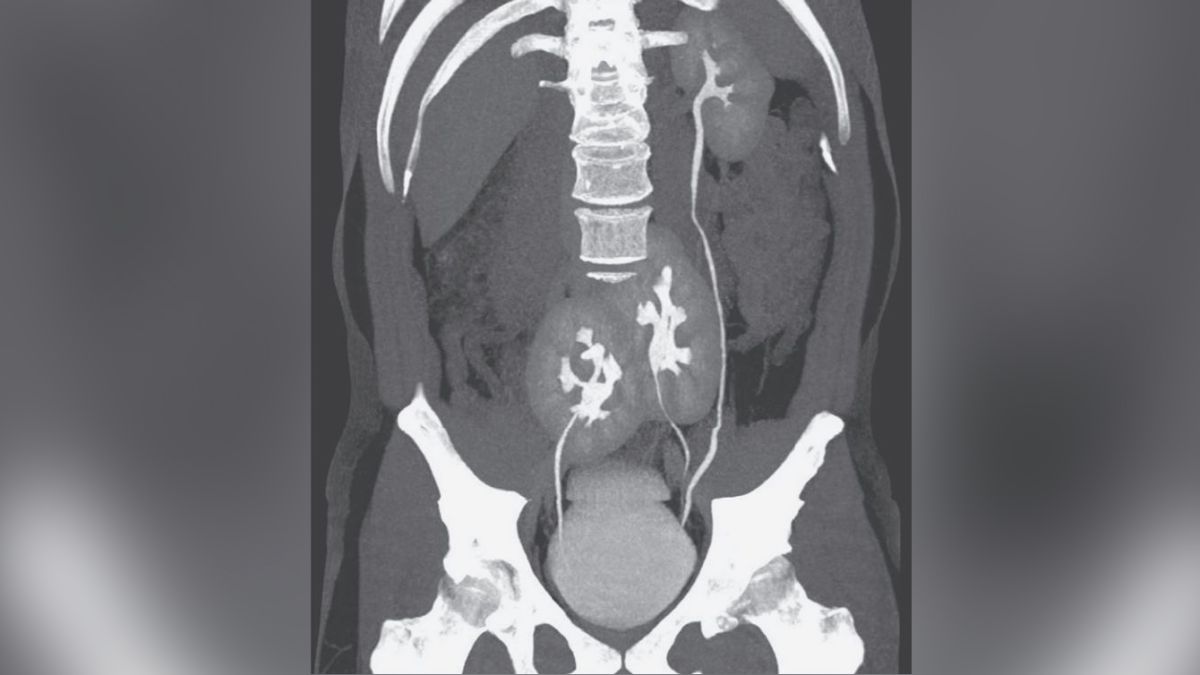 From a man with green urine to a teenager with a sewing pin in his heart, a number of intriguing medical cases caught our eye this year.

These “case reports,” which describe the conditions of individual patients, don’t usually have the type of broad implications that are seen in rigorous scientific studies with thousands of participants. But they can sometimes help doctors better understand rare diseases or spot unusual signs of common conditions. Here are 10 of the strangest case reports Live Science covered in 2020.

Having your pee turn green can be scary. But as a man in Chicago found out, green pee can be a rare side effect of some medications.

The 62-year-old man was hospitalized after he was found to have high levels of carbon dioxide in his blood, a condition that can be life threatening. The man was placed on a ventilator and given a general anaesthetic called propofol, according to a report of the case, published Dec. 2 in The New England Journal of Medicine. Five days later, the man’s urine, which was being collected in a catheter bag, turned green.

While green urine can be due to a number of factors, in this case, the culprit was propofol. This medication is widely used for general anesthesia, but in rare cases, it can turn a person’s urine green.

Fortunately, this discoloration is benign and goes away once the medication is stopped. Indeed, the man’s urine returned to a normal color once he was taken off propofol, the report said.

People can develop allergies to pretty much anything, including cold air. That was the case for a man in Colorado, whose allergic reaction to the cold was so severe, he almost died.

The 34-year-old old man collapsed after he stepped out of a hot shower into a cold bathroom, according to a report of the case published Oct. 27 in The Journal of Emergency Medicine. The man was struggling to breathe and his skin was covered in hives. He was experiencing a life-threatening, whole-body allergic reaction known as anaphylaxis.

Doctors diagnosed him with cold urticaria, an allergic reaction of the skin after exposure to cold temperatures, including cold air or cold water. The most common symptom is a red, itchy rash (hives) after exposure to the cold; but in more serious cases, people can develop anaphylaxis, which can cause their blood pressure to plummet and airways to narrow, making breathing difficult.

The man was treated with an antihistamine and steroids, and his condition improved. He was prescribed an epinephrine auto-injector, which can treat anaphylaxis in emergency situations.

It is possible to overdose on candy, at least if you’re eating black licorice. That’s because it contains a compound known to be toxic in large doses. In an extreme case of this happening, a man in Massachusetts died after eating too much black licorice.

The 54-year-old man suddenly lost consciousness after experiencing a life-threatening heart rhythm problem, according to a report of the case, published Sept. 23 in The New England Journal of Medicine. His family said that the man had a poor diet, and in recent weeks, he had consumed one to two large packages of black licorice every day. Despite receiving multiple treatings in the intensive care unit, the man died 32 hours after arriving at the hospital, the report said.

Black licorice often contains a compound called glycyrrhizin, which is derived from licorice root, according to the Food and Drug Administration (FDA). Consuming too much licorice root or candies flavored with licorice root can be dangerous because glycyrrhizin lowers the body’s potassium levels. This, in turn, can lead to high blood pressure and abnormal heart rhythms.

The FDA says that eating just 2 ounces of black licorice a day for two weeks can cause heart rhythm problems, particularly for people ages 40 and older.

A teen’s chest pain had a surprising cause — there was a sewing pin in his heart.

The 17-year-old went to the emergency room after he experienced a sharp pain in his chest that radiated to his back, according to a report of the case, published July 29 in The Journal of Emergency Medicine. A CT scan of his chest showed there was an “linear metallic foreign” object lodged in his heart, the report said.

That object turned out to be a 1.4-inch (3.5 centimeters) sewing pin, which doctors removed through open-heart surgery.

The teen initially told the doctors he hadn’t ingested any foreign objects or experienced physical trauma to his chest. But in a later interview, he revealed that he tailors his clothes and sometimes holds sewing pins in his mouth. Still, he said he wasn’t aware of ingesting a sewing pin.

Foreign bodies in the heart are rare, especially in children and teens. Fortunately, the teen recovered after his surgery and had no complications as far as the authors are aware, they said.

A woman’s bladder turned into a brewery of sorts when it started fermenting sugar into alcohol.

The 61-year-old woman needed a liver transplant because she had cirrhosis, or scarring of the liver. But her doctors were puzzled when her urine repeatedly tested positive for alcohol, even though she denied drinking, according to a report of the case, published Feb. 24 in the journal Annals of Internal Medicine.

After some careful sleuthing, doctors discovered that microbes in the woman’s bladder were fermenting glucose (sugar) into alcohol.

The woman’s condition is similar to a rare disorder called “auto-brewery syndrome” (ABS), in which microbes in the gastrointestinal tract convert carbohydrates into alcohol. People with ABS can get drunk just from eating carbs, Live Science previously reported. But in the woman’s case, the fermentation was taking place in her bladder, which makes her condition distinct from ABS, the report said. In her case, the alcohol didn’t get from the bladder into the bloodstream, so the woman didn’t appear intoxicated.

The woman’s condition was so rare that it didn’t even have a name yet. Her doctors proposed calling it “urinary auto-brewery syndrome” or “bladder fermentation syndrome.”

Although your mind may wander from time to time, you usually expect your physical organs to stay in the same spot inside your body. But that’s not always the case, as a woman in Michigan found when her spleen traveled a whole foot inside her body over 48 hours.

The woman had a rare condition known as “wandering spleen,” which happens when the ligaments that keep the spleen in its usual spot become weakened and allow the organ to migrate inside the body.

CT scans of the woman’s abdomen taken just two days apart showed that her spleen had traveled from the upper left quadrant of her abdomen to the lower right quadrant, according to a report of the case published Nov. 19 in The New England Journal of Medicine. That’s about a 1-foot (0.3 meters) distance, the authors said.

The woman had a liver condition that resulted in her spleen getting larger, which in turn caused the ligaments surrounding her spleen to stretch out. The typical treatment for wandering spleen is removal of the spleen. But in this case, the woman was hoping to receive a liver transplant, and undergoing a separate surgery to remove her spleen could result in complications that would prevent her from qualifying for a new liver. So doctors decided to wait, and planned to remove the spleen at the same time as her liver transplant surgery.

People with COVID-19 are typically contagious for about eight days after they contract the infection. But a woman in Washington state shed infectious virus particles for a record 70 days, meaning she was contagious during that entire time. However, she never showed symptoms of the disease, according to a report of the case, published Nov. 4 in the journal Cell.

The 71-year-old woman had a type of leukemia, or cancer of the white blood cells, and so her immune system was weakened and less able to clear her body of the new coronavirus, known as SARS-CoV-2.

The woman was infected in late February during the country’s first reported COVID-19 outbreak, which occurred at the Life Care Center rehabilitation facility in Kirkland, Washington. Over a period of 15 weeks, the woman would be tested for COVID-19 more than a dozen times. The virus was detected in her upper respiratory tract for 105 days; and infectious virus particles — meaning they were capable of spreading the disease — were detected for at least 70 days.

Eventually, the woman was able to clear the virus, although doctors don’t know how this happened. The findings suggest that immunocompromised patients with COVID-19 may be contagious for much longer periods than typical.

A man in Brazil surprised his doctors when a scan showed he had not two, but three kidneys — a very rare condition.

The 38-year-old man initially sought medical care for severe back pain, according to a report of the case, published May 6 in The New England Journal of Medicine. A CT scan showed that his back pain was due to a herniated or “slipped” disk, a relatively common condition in which part of a cushion-like disk between the spinal vertebrae moves out of place.

But his doctors couldn’t help but notice that the man had an unusual anatomical feature. Instead of the usual two kidneys seen in a typical person, the man had three: a normal-looking kidney on his left side and two fused kidneys located near the pelvis, the report said.

Having three kidneys is rare, with fewer than 100 cases reported in the medical literature. The condition is thought to arise during embryonic development, when a structure that typically forms a single kidney splits in two. The man didn’t need any medical attention for his extra kidney, but he did receive oral painkillers for his back pain, the report said.

So-called hot tub lung is a rare condition caused by bacteria that can thrive in warm water. But it’s not always linked to hot tubs, as a teen in Australia found when he contracted the disease from his indoor swimming pool.

The teen developed severe breathing difficulties that sent him to the emergency room, according to a report of the case, published Nov. 11 in the journal Respirology Case Reports. Prior to his hospitalization, the teen had been recovering from ankle surgery and spent most of his time in his home’s media room, which was next to their indoor swimming pool.

He was diagnosed with hot tub lung, a disease that can occur when people inhale certain aerosolized bacteria that belong to the genus Mycobacterium, including Mycobacterium avium.

An analysis of the pool water from the teen’s home found that it was contaminated with this bacteria. The family said that they had recently switched the sanitizer they used for their pool, from chlorine to a non-chlorine alternative, and this allowed the bacteria to grow.

Several other people in the teen’s family developed respiratory problems, also likely due to hot tub lung. Two years later, the family had recovered but their lungs still showed signs of mild damage from the illness.

A woman who went to the emergency room for abdominal pain and vomiting found out that her symptoms were the result of complications from a surgery she had six decades earlier.

Doctors discovered there was a 1.5-inch (4 cm) long calcified stone in her intestines, according to a report of the case, published Jan. 8 in the journal BMJ Case Reports. It turned out the stone had been developing inside the woman over the course of nearly her entire life.

When the woman was six days old, she had undergone a surgery for an intestinal blockage. But the surgical method that her doctors used left a dormant piece of intestine in her body, which accumulated substances over time, and gradually led to the formation of the stone.

Doctors were able to remove the stone via surgery, and the woman fully recovered.