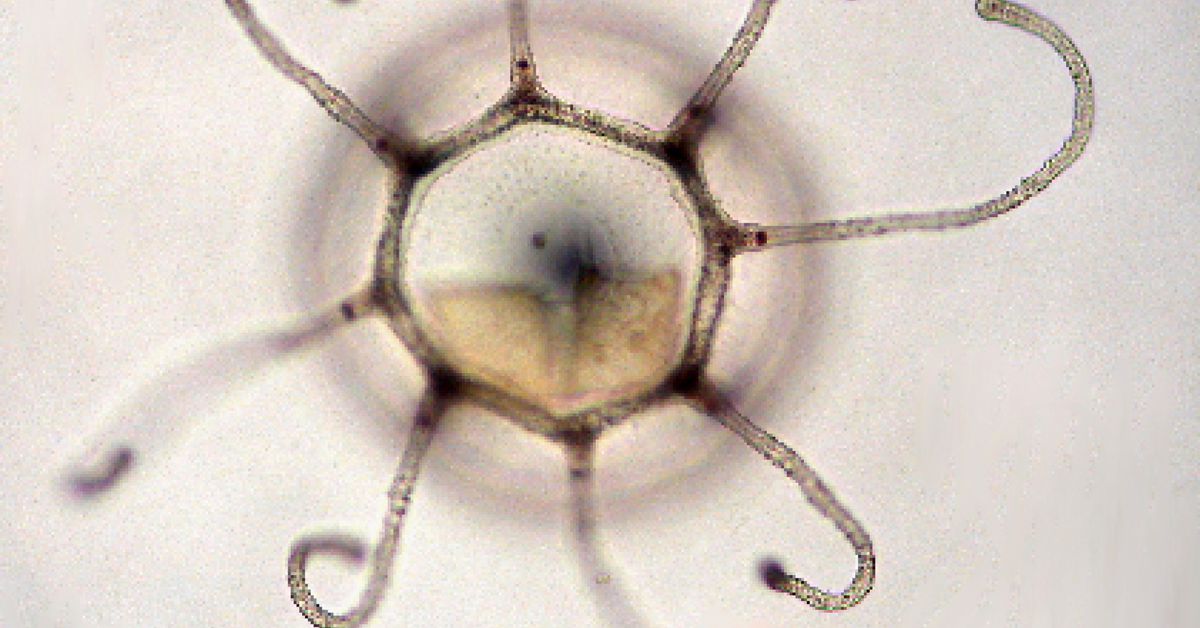 This week’s episode is all about thriving in the face of disaster. For more tales of resilience, check out the latest issue of Popular Science—it’s on newsstands now!

Living forever isn’t a real thing, and aging backwards is the stuff of fairy tales and unrealistic skin product ads. Or is it? For one tiny hydrozoan creature from the coast of Italy, avoiding death is something that just, well, happens—over and over and over again.

When stressed, injured, starving, or otherwise provoked, the pinky-nail-sized Turritopsis dohrnii skips the whole growing old and dying thing in favor of reverting to infancy. It repurposes its worn-out, grown-up cells and spurts out hundreds of fresh-faced identical clones in a jiffy.

Since these critters are pretty darn hard to kill—and reproduce like crazy whenever they survive a brush with death—the tiny beauties have invaded pretty much every corner of the world.

How the chicken becomes the egg again (or in this case, how the medusa becomes a polyp) is still a mystery. But don’t worry: there are brilliant minds, both scientific and musical, working hard to figure out the jellyfish’s anti-aging secret.

Whether or not the blessed creation that is the potato chip is an American invention is certainly in question, but what’s not in question is just how much we love those crunchy, salty, slices of deep-fried carbs. On average, a person in the US eats about 6 pounds of chips every year.

Yet there was a time when the future of the chip was not quite so certain.

During World War II, rationing of necessities like oil and shortening got the snack classified as (gasp) a “non-essential” food by the War Production Board. Fortunately for chips—and all of us—a Midwesterner named Harvey F. Noss was ready for a fight. Listen to this week’s episode to hear how chips triumphed in the face of certain disaster.

FACT: Pablo Escobar’s cocaine hippos might not be all bad

Pablo Escobar is a complex historical figure for sure, but one aspect of his complicated legacy is particularly surprising: his pet hippos.

In the 1980s, Escobar built himself a 7,000 acre estate that included, among other things a zoo, which included, among other things, four hippos—three females and a male bought from a zoo in California. The estate is actually now a theme park, but it sat idle and neglected for something like a decade after Escobar was shot dead by Colombian police in 1993. Authorities shipped most of the zoo’s occupants off to wildlife preserves or public zoos, but they decided the hippos were too large to deal with transporting. I guess they figured the hippos would stay put. Spoiler alert: the hippos did not stay put. And they had a lot of babies.

Today Colombia is home to an estimated 80 hippopotami—by far the largest wild population of the animals outside their native habitats in Africa. As invasive species, these critters must be wrecking their new environment… right?

New research recently brought that assumption into question. According to a paper released in March, the hippos might actually be filling an ecological niche that’s been empty for tens of thousands of years. By mimicking some of the behaviors of long-extinct animals like the region’s giant llama, hippos might actually be productive members of Colombian society.

That’s not to say the critters fit in seamlessly, or that they should be allowed to reproduce and spread in the area unchecked. But studies like these provide an important reminder of just how poorly we understand the planet we live on—and how careful we should be when we decide which human messes to clean up and how.

For more on the cocaine hippos, give this week’s episode a listen—and go grab a copy of the latest issue of Popular Science!

If you like The Weirdest Thing I Learned This Week, please subscribe, rate, and review us on Apple Podcasts. You can also join in the weirdness in our Facebook group and bedeck yourself in Weirdo merchandise (including face masks!) from our Threadless shop. And for even more tales of stunning resilience, check out the latest issue of Popular Science—it’s on newsstands now!