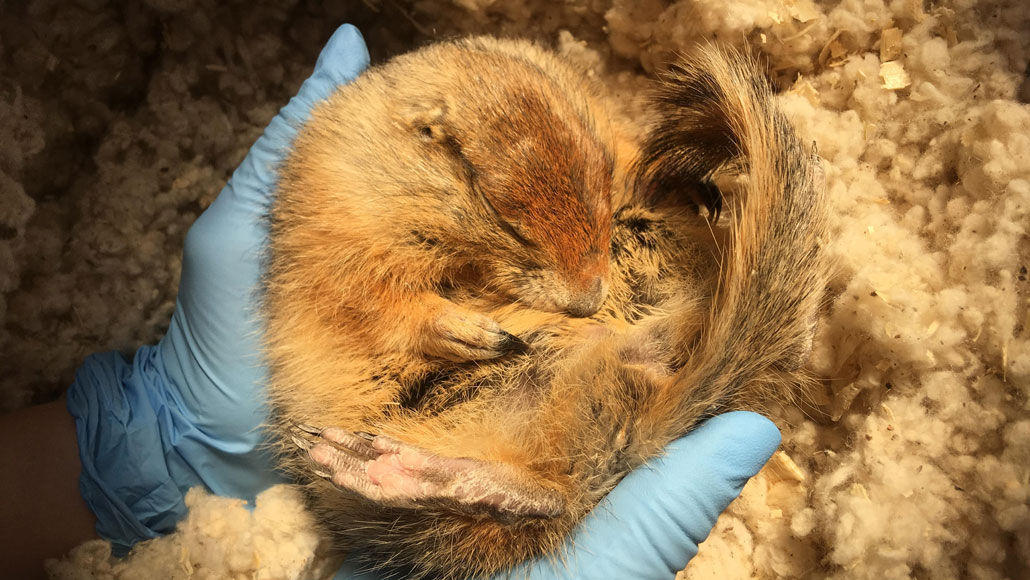 Arctic ground squirrels can survive harsh winters with below-freezing temps by holing up for some eight months without eating. These hibernators “live at the most extreme edge of existence, just barely hovering over death, and we don’t fully understand how this works,” says Sarah Rice, a biochemist at the University of Alaska Fairbanks.

By snooping on what’s going on inside these squirrels, researchers now have a better idea. Nutrients recycled from muscle breakdown help the animals get by during hibernation, Rice and her colleagues report December 7 in Nature Metabolism.

From autumn to spring, Arctic ground squirrels (Urocitellus parryii) hibernate in bouts of deep torpor. In a state akin to suspended animation, the squirrels breathe just once a minute, and their hearts beat five times per minute. Every two or three weeks, the squirrels revive somewhat for about 12 to 24 hours; their body temperatures rise, and the animals shiver and sleep, but don’t eat, drink or defecate.

To monitor the animals’ body chemistry, “I worked in dark, cold chambers — utterly quiet —surrounded by hibernating squirrels,” Rice says. Periodically, she carefully withdrew blood from a tube inserted in their blood vessels.

During the squirrels’ torpor, Rice and her team observed a chemical signal showing that skeletal muscle was slowly breaking down. That process would release compounds containing nitrogen, an element important for making the proteins found in muscle. But hibernators, including these squirrels, are known to hang on to muscle mass as they hibernate (SN: 2/17/11). So the scientists wondered whether the squirrels build up new stores of protein during hibernation, and if so, how.

Tracking the flow of nitrogen in the animals’ bodies provided clues. The researchers gave the critters a cocktail of chemicals labeled with isotopes, forms of elements having different masses. That revealed nitrogen going into amino acids, the building blocks of proteins, that formed in the animals’ muscles and also in the lungs, kidneys and other areas of the body during those brief periods between bouts of torpor.

By recycling nutrients from their muscles, the squirrels sustain themselves and also avoid a toxic consequence of muscle breakdown, says team member Kelly Drew, a neurochemist also at the University of Alaska Fairbanks. During hibernation, nitrogen would otherwise end up in ammonia, which could build up to potentially deadly levels. Instead, the squirrels are able to incorporate that nitrogen into new molecules, she says.

Other studies have pointed to a role for the microbiome — the microbes living on and inside animals — in recycling nitrogen while animals hibernate, says James Staples, an environmental physiologist at Western University in London, Canada, who was not part of the work. Typically, the breakdown of proteins eventually creates urea, a nitrogen-containing chemical that gets excreted. Microbes can scavenge that urea and release its nitrogen back into the blood. But in the squirrels, the muscle is “being broken down and then recycled directly back into these amino acids …  the gut microbiome may not be as important as we thought it used to be.”

Insights from hibernators could someday help humans, says Sandy Martin, a biochemist at the University of Colorado School of Medicine in Aurora who was not involved with the study. “Hibernators are so extraordinary” in their abilities to withstand conditions that humans are extremely sensitive to, she says (SN:12/19/17). For instance, animals like these squirrels are far more resistant to the harm can result when organs don’t receive necessary blood flow and oxygen. And harnessing hibernation-like approaches could prove advantageous in cases where a slower metabolism would be useful, from routine surgery to long voyages in space, she says.