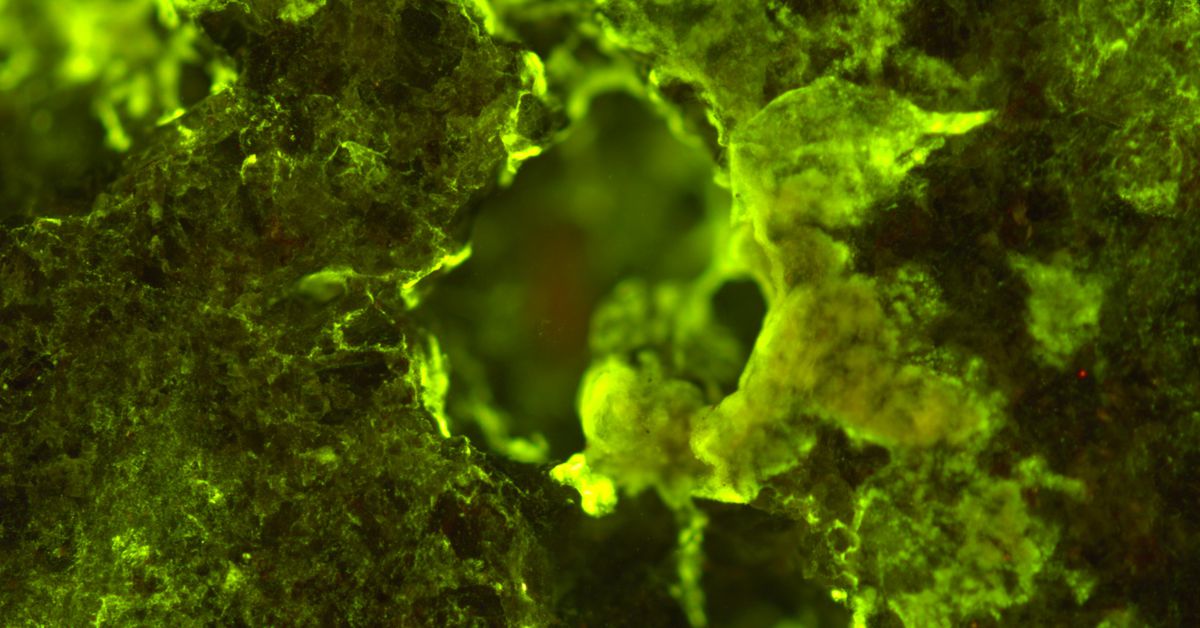 If humans ever want to take the unprecedented step of establishing a base on the Moon, Mars, or any other celestial destination, they may need to extract resources from local rocks to support themselves. According to a new study outlined in Nature Communications, we might be able to enlist some very small accomplices to do that grunt work—microbes.

Harnessing microbes to do mining work is par for the course on Earth: About 20 percent of the world’s copper and gold is currently extracted with the aid of rock-chowing bacteria. But it was unclear to researchers how well they’d perform in other cosmic locales.

To see if microbes are up for the space mining gig, the first-of-its-kind experiment (called BioRock) hitched a ride to the International Space Station onboard the SpaceX Dragon capsule in July of last year. Astronauts in our high-tech home in the sky fired up a series of miniaturized reactors—matchbox-sized mining devices with small blocks of basalt (a type of volcanic rock that is common on the moon and Mars) submerged in a bacterial solution.

Three types of bacteria were selected—Sphingomonas desiccabilis, Bacillus subtilis and Cupriavidus metallidurans. As these microbes munched on the rocks for about three weeks, they were exposed to varying gravitational conditions—microgravity conditions similar to those on the moon, Mars and Earth-like gravity, which were simulated using a centrifuge. Researchers then measured how much iron, magnesium, and more than a dozen other elements the bacteria can pull out of the rock samples. (Back in our Earthly abode, trials were carried out in parallel to give the team a control in normal gravity conditions.)

Of the three bacteria species studied, S. desiccabilis didn’t seem bothered by the changing gravitational conditions. It was the most capable of extracting elements like neodymium and cerium, displaying 70 percent extraction efficiency. “We were surprised that there was no significant effect of the different gravities on the biomining, given that microgravity is known to influence the behavior of fluids,” astrobiologist and study co-lead author Charles Cockell told Space.com. The other two species, according to researchers, were either less effective in low gravity conditions or were completely unable to perform the task.

Buz Barstow, a synthetic biologist at Cornell University who was not involved in the study, told Chemical and Engineering News that “there are obviously many steps” to go from this prototype to a biomining system that could be used in space, “but they’ve got a great start.”

Cockell adds that while it is not economically viable to mine elements in space and bring them to Earth, a spacefaring allegiance between humans and these tiny miners could help support a future off-Earth base. Researchers hope bacteria may perhaps one day help us break down a patch lunar regolith into soil to grow space veggies or extract minerals used in life support systems that produce air and water.

“I think we should continue exploring the types of microbes that would give us the best results in extracting useful elements from materials to be found in space, such as on asteroids, the moon and Mars, and we should continue to develop the technology for optimizing these sorts of biologically enhanced industrial processes in space,” Cockell adds.

Going forward, the authors of the study are now turning their attention to BioAsteroid, an exciting repeat of the reactor experiment but with crushed-up asteroid material that will launch to the ISS in December.