These tiny, little-winged dinosaurs were probably worse at flying than chickens 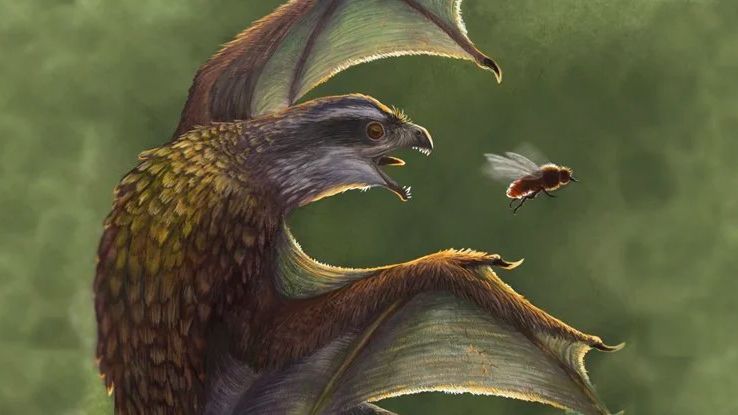 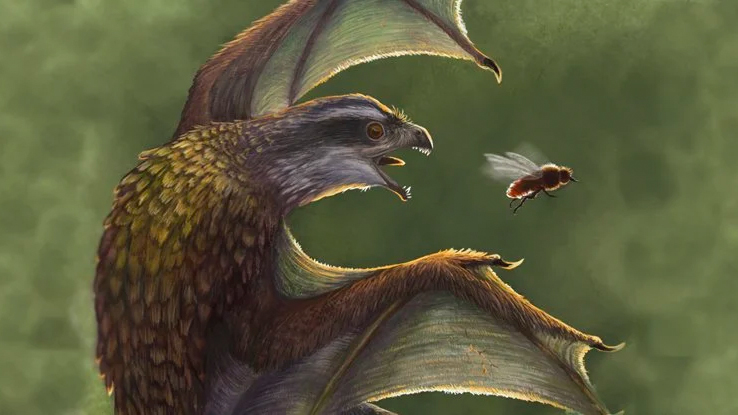 The discovery of two small dinosaurs with bat-like wings a few years ago was a palaeontologist’s dream. Just how flight evolved in birds is something we’re still trying to nail down, and looking at this early evolution of bat-like wings in dinosaurs could give us a clue.

But a team of researchers has now pointed out that just because you have wings, it doesn’t necessarily mean you’re actually any good at flying.

Yi qi and Ambopteryx longibrachium are two species of theropod dinosaurs that lived around 160 million years ago, both of which had unusually elongated fingers, and a skin membrane stretching between them, similar to a bat’s wing.

This is an entirely different kind of wing to the one theropod dinosaurs evolved to fly with – the dinosaurs that eventually became birds. And, unlike them, after only a few million years, Yi and Ambopteryx became extinct, which is the first hint that these unusual wings could not match those birds-to-be.

However, weird wings on extinct critters mean it’s likely multiple types of wings (and therefore flight) evolved over the years, and that Yi and Ambopteryx’s attempts were not the winning strategy.

But before you can write off Yi and Ambopteryx as complete evolutionary flight failures, you have to know how good (or bad, as the case may be) the two species were at flight.

In 2015, when Yi was found, that team of researchers suggested that the size of its wings and other flight characteristics could mean it was a gliding creature – however it’s unlike any other glider we know of, and its centre of mass might have made even gliding difficult. We just weren’t sure.

A new study, by researchers in the US and China, has now looked into the flight potential of Yi and Ambopteryx in a lot more detail, and come to the conclusion that they really weren’t good at getting their little feet off the trees they lived in.

“We find that Yi and Ambopteryx were likely arboreal, highly unlikely to have any form of powered flight, and had significant deficiencies in flapping-based locomotion and limited gliding abilities.”

The team’s analysis of the fossils (Yi pictured below) was able to pick up tiny details in soft-tissue that you can’t see with normal light.

Then the team modeled how the dinosaurs might have flown, adjusting for things such as weight, wingspan, and muscle placement (all stuff we can’t tell just from the fossils).

The results were … underwhelming.

“You have to give them extremely generous assumptions in how they can flap their wings. You basically have to model them as the biggest bat, make them the lightest weight, make them flap as fast as a really fast bird, and give them muscles higher than they were likely to have had to cross that threshold. They could glide, but even their gliding wasn’t great.”

So, according to Dececchi and his team’s model, we’re looking at flying capabilities considerably worse than a chicken, perhaps worse than the flightless New Zealand parrot, the kakapo, which is also mostly limited to gliding from trees, but can at least flap to control descent.

But although it’s a bit sad for the Yi and Ambopteryx, it’s good news for us – the findings give even more evidence that dinosaurs evolved flight (or at least tried to) multiple times.

As the team points out, considering all the types of bats, gliders, flying squirrels, and other gliding or flying mammals, maybe it shouldn’t be a surprise.

“We propose that this clade was an independent colonization of the aerial realm for non-avian theropods. If true, this would represent at least two, but more likely three or more attempts at flight (both powered and gliding) by small pennaraptoran theropods during the Mesozoic,” the team writes in their paper.

“Given the large number of independent occurrences of gliding flight within crown mammals, this should perhaps be unsurprising, but it does create a more complex picture of the aerial ecosystem.”

Seems like some things don’t change much, even in a hundred million years.

The research has been published in iScience.