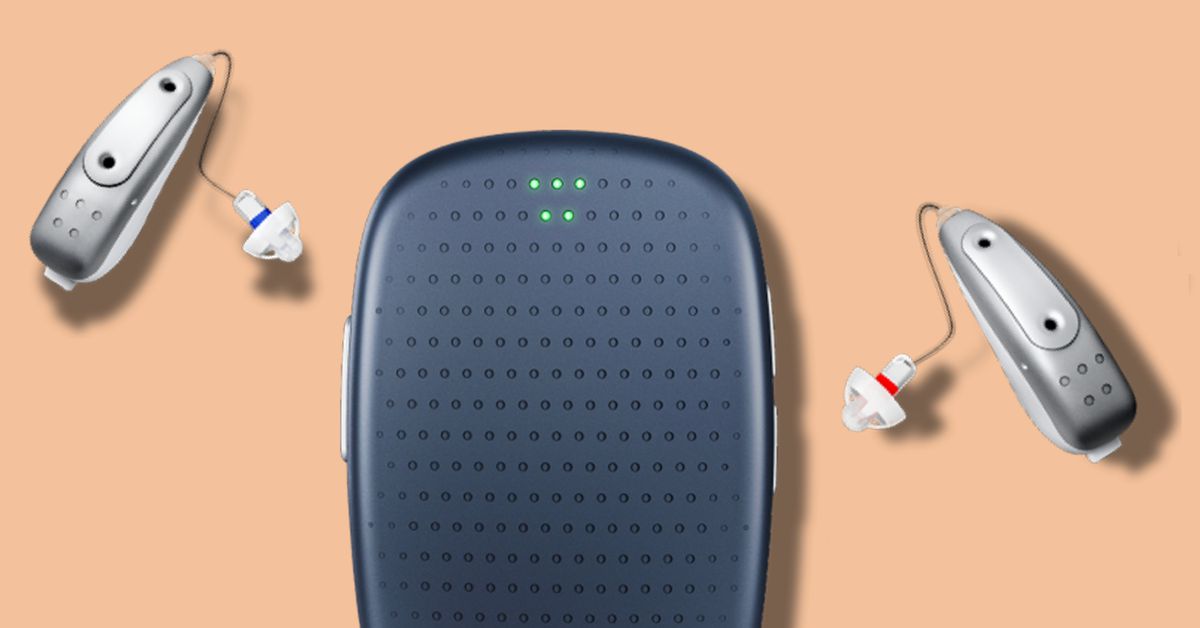 A typical high-end hearing aid keeps all of its essential electronics in a module that sits behind the wearer’s ear. When it launched its first hearing aid earlier this year, however, Whisper added another processing module that it calls “the brain” into the equation. About the size of a deck of cards, the brain sits in the wearer’s pocket and includes five processors—in addition to the two in the earpiece itself—in order to add AI-powered features to help address the wide range of hearing loss people typically experience.

Types of hearing loss vary widely from person to person. According to the Johns Hopkins Cochlear Center for Hearing and Public Health, more than 38 million individuals in the U.S. suffer some form of hearing loss. Whisper hopes that AI will help address the disparity in those conditions. Rather than relying totally on AI, however, Whisper also uses a hearing health professional to guide the process along.

Whisper is only available as part of a $139 monthly subscription, and getting fitted with a device starts with a trip to the audiologist. Rather than allowing users to skip the trip to a professional, Whisper relies on a doctor’s expertise to get the device working properly for each specific individual. “You get an audiogram and they use that to program the device,” says company president and co-founder, Andrew Song. “That’s just a starting point.”

Song says that there are individual preferences, but there are also some common trends that can help guide the overall tuning. “We’ve found that older people like their hearing aids to be a little quieter than younger people. That’s not a medical thing, but it’s a trend we’ve noticed—a preference.”

Once a person is set up with their device, the AI starts interpreting the sounds around the wearer. Microphones on the ear modules pull in sound and use a pair of internal processors to handle typical amplification tasks like you’d find in a normal hearing aid. In fact, if a person leaves the brain module at home or it runs out of battery, Whisper will still work like a typical hearing aid. That’s more than sufficient for simple settings like a handful of people talking in a quiet room.

More complex situations—like a crowded bar or an echoey space—require the extra computing firepower found in the brain. Whisper’s algorithms listen to the incoming signals to try and pinpoint the voice the wearer is trying to focus on and amplifies it above the din of the environment. The AI can tell the difference between what you want to hear and what you don’t and it will get better as the company refines its algorithms.

The brain connects wirelessly to the earpiece, which requires super-fast connectivity speeds. Bluetooth couldn’t handle that task, says Song. “Bluetooth is really too slow,” he explains. “When you’re using a hearing aid, you don’t want a lag between what you hear naturally and what the hearing aid is putting in there.” To remedy the problem, Whisper built its own wireless connectivity tech that moves data much faster than typical methods.

In addition to the two pieces of hardware, Whisper also offers a companion app to help monitor battery and control the devices. Eventually, it will also offer a portal to allow users to update their devices. Those software updates are a crucial part of what makes Whisper unique in the market at the moment. Song says device performance should improve every time the AI updates, which will happen every couple months.

The idea of an AI-equipped hearing aid isn’t totally new. There are other options on the market, like Starkey’s Livio AI, but it doesn’t have the benefit of Whisper’s extra computing firepower in the brain module, and it doesn’t offer the same accessible subscription feature to lower the up-front cost.

When the first update lands next year, it will require a trip back to the audiologist in order to get the new software, but Song says that’s part of the plan. For our first few updates, we’ll want people to go back to the clinic,” he says. “After they get an update, the sound processing will be better so they might want a different change to the overall sound.”

Whisper isn’t trying to replace the doctor or trips to a clinic. Even though it’s a full-fledged, FDA-regulated hearing aid device, Whisper hopes to strike a balance between simple, AI-driven performance and expertly guided advice from professionals.

Whisper is only available via subscription at the moment for $139 per month, which includes the regular software updates. It’s not cheap, but many of the high-end hearing aids with which it hopes to compete cost well above $5,000 and won’t improve their performance over time like Whisper promises to do. And because it’s a fully FDA-regulated device, it can handle more severe hearing issues than some other products on the market.

Whisper is currently offering devices through audiologist partners and the company plans to start rolling out updates in 2021.