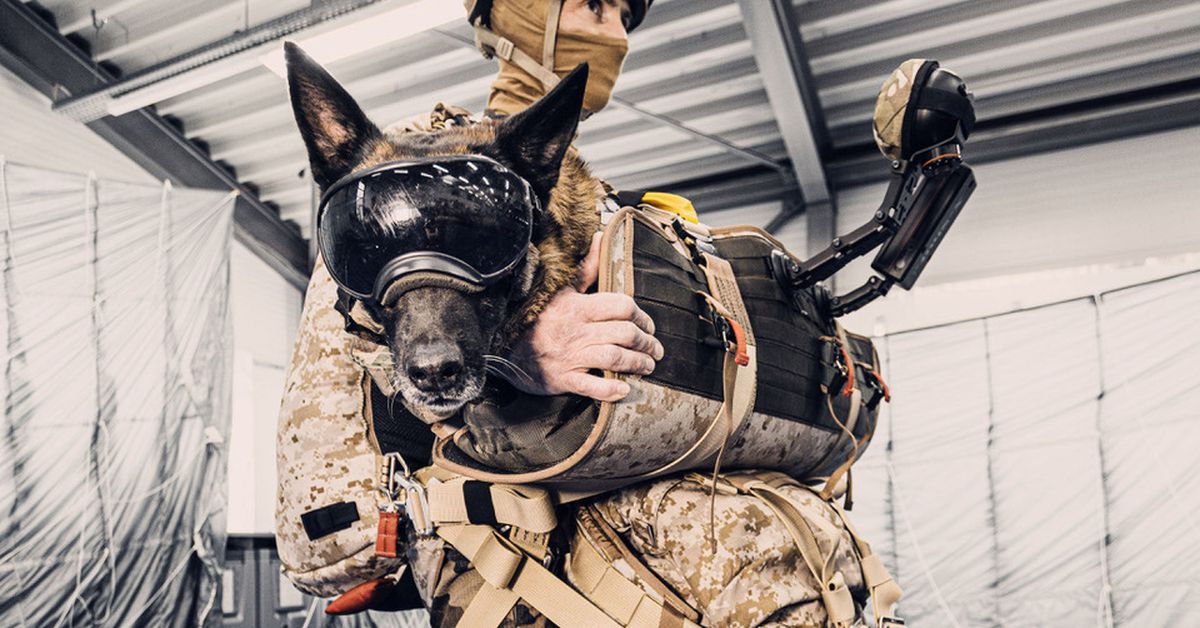 The dog is in a flight pod, and that pod rests in a taco-shell-like tray. (Paratec/)

Military dogs and their handlers play vital roles, particularly in covert operations. But when these missions occur miles away from base and the humans parachute in, how do you get the dog there too?

The latest piece of kit in Europe to enable this extreme maneuver is the K9F Para-fox, presented at the Defense Innovation Forum in Paris on December 4 of last year.

The roots of the K9F date to 2015, but the development of this line of tech can be traced back further. When in early 2012 the German army, seeking a solution for parachuting with working dogs, approached a company called Paratec, “our research didn’t yield any other [dog-parachuting] solutions out there,” Ken Krueger, the business development manager for Paratec defense systems, tells Popular Science. Paratec is a small German outfit that designs and manufactures high-tech parachutes for niche users such as professional sky-divers and special forces. The 45-employee company in Wallerfangen, just near the borders with France and Luxembourg, is the original equipment manufacturer for “mission specific” parachute equipment for the German military and 18 other armed forces across the world.

By March of 2012 the company had an initial concept for its “Working Dog Freefall Harness,” or K9A, by simply modifying an existing dog vest that had handles on it so that it could be attached to the front of the paratrooper’s harness. The dog hung close to the paratrooper’s body, all legs dangling, and the paratrooper needed to hold the dog’s legs bent on landing so they didn’t break. But that was hard to do because the paratrooper had to control the chute, too. “And of course if the dog breaks a leg then it can’t undertake its mission,” Krueger explains.

Military dog-handlers the world over have parachuted with their dogs for decades; here’s a Colombian canine doing it in 2015, for example. And in the US, the Marine Corps has 23 Military Working Dog Harnesses for parachuting made by a company called Airborne Systems.

Between 2012 and 2014 Paratec tried different solutions. The second idea was a longer harness that gave more support to the dog rather than just holding it up by its middle. But the dangling legs were still an issue.

The year 2015 was a turning point for Paratec. It was then that the French military, specifically Captain Jérôme (last names of French military personnel are withheld for security reasons), commander of the 132nd dog-handling infantry regiment, approached Paratec with specific requirements. Captain Jérôme wanted his pooch to be able to be more comfortable while parachuting.

In March of that year came the breakthrough idea of a sack, now in its sixth and final version. Hence the name “fox” which is short for “fox-trot,” the military designation of the sixth letter of the alphabet, and as this version was developed specifically with the French army, also F, the name stuck.

The sac is now termed a flight-pod. It is made of cordura, spandex, and webbing with softer lining to make it comfortable. It opens up flat and the dog lays down on it with both hind and fore legs folded underneath itself—this is the way military dogs are trained to lie down so that they can jump up faster. The pod is zipped over the dog and a collar made of neoprene and spandex is closed around the dog’s neck so that it can’t wriggle out of the pod in mid-flight. The collar is closed with a specially designed magnetic release that the handler can activate, but the dog can’t.

The flight pod, as seen from the top. (Paratec/)

Two people are needed to lift the dog-in-a-pod onto a support harness known as the pod-tray, shaped somewhat like a taco-shell, which is attached to the human jumper’s harness. Two straps close the tray around the dog. The system means the dog can wander around the airplane until a few minutes before the jump when it is zipped into the flight-pod, then lifted onto the tray, and the team is ready to fly!

“The animal’s welfare was first and foremost. It had to be comfortable, ventilated, have its legs protected and be secure. We had to make sure that our equipment did not hinder the use of various accessories the dog may be wearing such as goggles, a leash, or a kevlar vest to protect it from being knifed after landing. The pod also had to be expandable to take account of different sized dogs,” Krueger explains.

So why did it take years to develop what, at first, appears to be a fairly simple piece of kit? Well, it’s not that simple. “Dog missions are not high on the priority list of conventional armed forces so they dedicate neither time nor funds to developing equipment for these missions. There are no R&D programs and there is no investment,” Krueger points out. So, the company developed the K9F on its own funds, “although the French were very dedicated in providing the dogs and organizing the jumps to test the equipment.”

This testing was the biggest challenge and most time-consuming activity. “One jump could take up to six months to organize,” Krueger says. “Although we purchased stuffed toy dogs for the development phase, at some point one has to test everything with a real dog.”

And because this is military equipment and the dog-handling paratrooper team (most often the dog-handler and his dog are “passengers” who jump in tandem with an experienced jumper, known as the tandem pilot) is too bulky to jump out of an aircraft’s small side-door, the test needs to take place from an airplane with a ramp.

Once on the ground an extremely ingenious system allows the flight-pod “to open up like a flower and release the dog in less than 10 seconds after landing.” Krueger explains that a handle is attached to a silicone coated wire threaded through seam loops and when the handle on top of the bag is squeezed the wire can slide out. “It’s a bit like those seams that shut sacs of potatoes. When you pull on one thread the whole seam comes undone.” Then all you have to do is thread the wire through the seam loops and the flight-pod is ready to be used again.

And what do the dogs think? “Well, all I can say is that the dogs come right over and jump in the pod with what looks like a smile on their faces,” laughs Krueger.