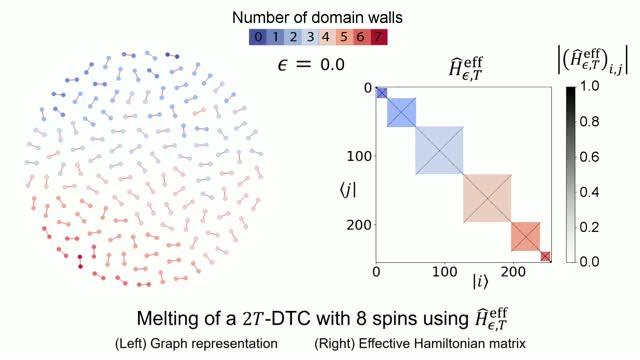 Time crystals sound like something out of science fiction, but they may be the next major leap in quantum network research. A team based in Japan has proposed a method to use time crystals to simulate massive networks with very little computing power.

They published their results on October 16 Science Advances.

First theorized in 2012 and observed in 2017, time crystals are arrangements of matter that repeats in time. Normal crystals, such as diamonds or salt, repeat their atomic self-organization in space, but do not show any regularity in time. Time crystals self-organize and repeat their patterns in time, meaning their structure changes periodically as time progresses.

“The exploration of time crystals is a very active field of research and several varied experimental realizations have been achieved,” said paper author Kae Nemoto, professor in the principles of informatics research division at the National Institute of Informatics. “Yet an intuitive and complete insight of the nature of time crystals and their characterization, as well as a set of proposed applications, is lacking. In this paper, we provide new tools based on graph theory and statistical mechanics to fill this gap.”

Nemoto and her team specifically examined how the quantum nature of time crystals — how they shift from moment to moment in a predictable, repeating pattern — can be used to simulate large, specialized networks, such as communication systems or artificial intelligence.

“In the classical world, this would be impossible as it would require a huge amount of computing resources,” said Marta Estarellas, one of the first authors of the paper from the National Institute of Informatics. “We are not only bringing a new method to represent and understand quantum processes, but also a different way to look at quantum computers.”

Quantum computers can store and manipulate multiple states of information, meaning they can process huge data sets with relatively little power and time by solving several potential outcomes at the same time, rather than one by one like classical computers.

“Can we use this network representation and its tools to understand complex quantum systems and their phenomena, as well as identify applications?” Nemoto asked. “In this work, we show the answer is yes.”

The researchers plan to explore different quantum systems using time crystals after their approach is experimentally tested. With this information, their goal is to propose real applications for embedding exponentially large complex networks in a few qubits, or quantum bits.

“Using this method with several qubits, one could simulate a complex network the size of the entire worldwide internet,” Nemoto said.

About the Research Organization of Information and Systems (ROIS)

About the National Institute of Informatics (NII)

NII is Japan’s only academic research institute dedicated to the new discipline of informatics. Its mission is to “create future value” in informatics. NII conducts both long-term basic research and practical research aimed at solving social problems in a wide range of informatics research fields, from fundamental theories to the latest topics, such as artificial intelligence, big data, the Internet of Things, and information security.

As an inter-university research institute, NII builds and operates academic information infrastructure essential for the research and educational activities of the entire academic community (including the Science Information Network) as well as developing services such as those that enable the provision of academic content and service platforms. https://www.nii.ac.jp/en/