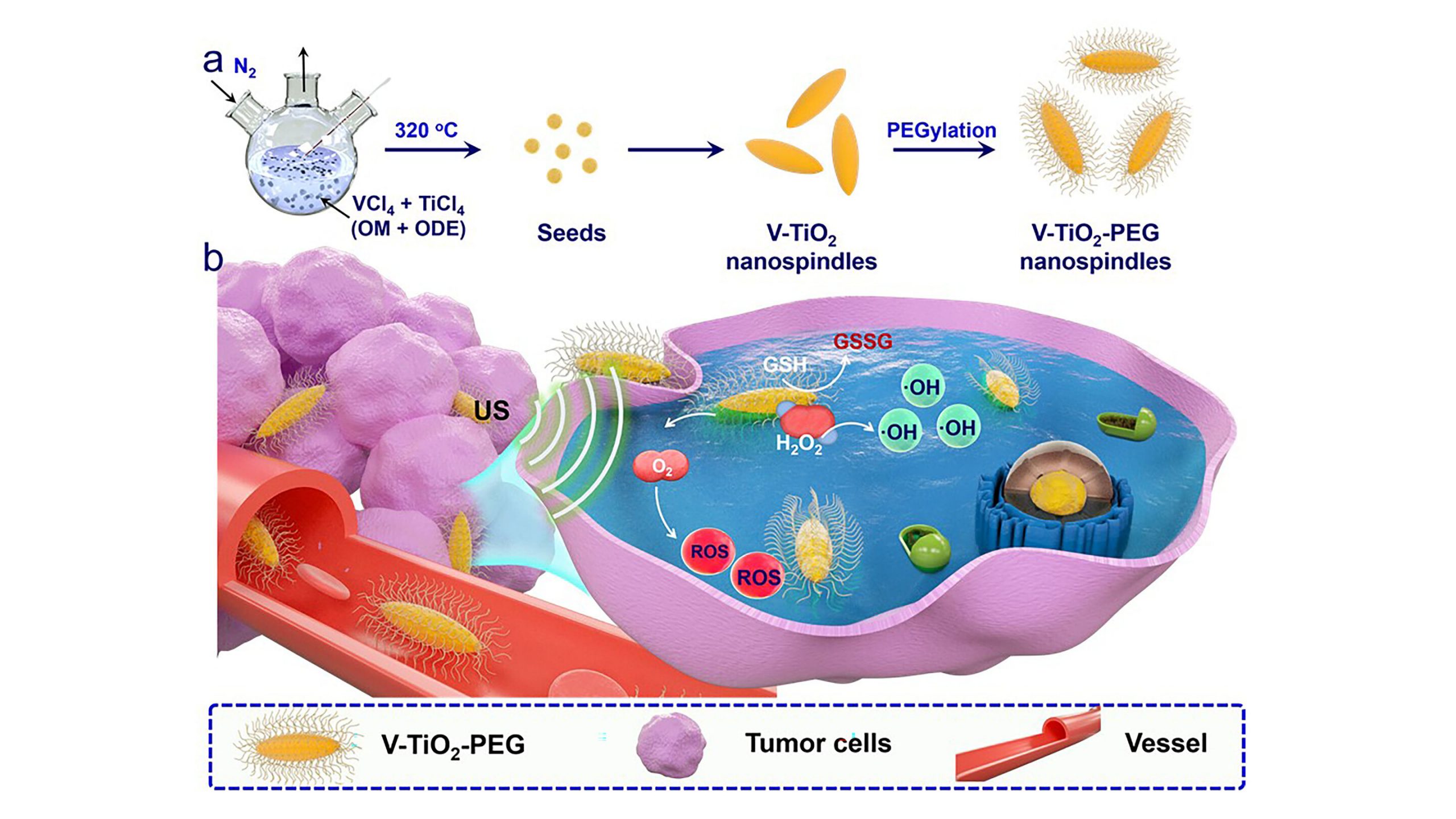 Ultrasound can be used to treat cancer when used in combination with molecules that sensitize the system to sound waves. These sonosensitizers generate toxic reactive oxygen species that attack and kill tumor cells.

In Applied Physics Reviews, scientists from Soochow University in China report a new type of sonosensitizer based on a vanadium-doped titanium dioxide, V-TiO2, that enhances the amount of damage ultrasound inflicts on tumors. Studies in mice showed that tumor growth was markedly suppressed when compared to a control group.

Organic molecules have been used in the past as sensitizers, but these are unstable and can lead to phototoxicity, where exposure to light can produce rashes or extreme sunburn. Inorganic sensitizers based on TiO2 nanomaterials are also used, but these do not work well and can remain in the body for long periods.

TiO2 does not work well as a sensitizer, because it has a wide band gap in its electronic structure. Even when the ultrasound strips electrons away from the TiO2 nanoparticles, the electrons rapidly recombine with the nanoparticles, preventing the generation of reactive oxygen species that could attack tumor cells.

The investigators realized they could avoid this effect by doping TiO2 nanoparticles with the metal vanadium to form nano-sized spindles.

The microenvironment around the tumor is key to cancer metastasizing and invading other tissue, and important for the way chemotherapy and other treatments work. The tumor microenvironment has an acidic pH but also contains a lot of hydrogen peroxide and a substance known as glutathione.

The investigators realized the V-TiO2 spindles act like tiny enzymes that catalyze chemical processes in the microenvironment. In the presence of ultrasound waves, the spindles allow a two-pronged attack on the tumor: one involving sound waves, the other a type of chemotherapy that degrades hydrogen peroxide and consumes glutathione. Both effects kill tumor cells without harming healthy tissue.

The investigators carried out a careful study using controls on both breast cancer tumor cells and on mice infected with these cancerous cells. In addition to direct measurements about tumor growth, they employed fluorescent probes to visualize reactive oxygen species and glutathione during the process.

“It is worth noting that V-TiO2 nanospindles are rapidly excreted from the body,” said Cheng. “This helps prevent any possible long-term toxicity effects.”

The scientists were also able to observe V-TiO2 nanospindles in the spleen and liver of the mice and, later, in the feces and urine. No obvious signs of organ inflammation or damage were observed, showing that these sensitizers are both safe and effective.