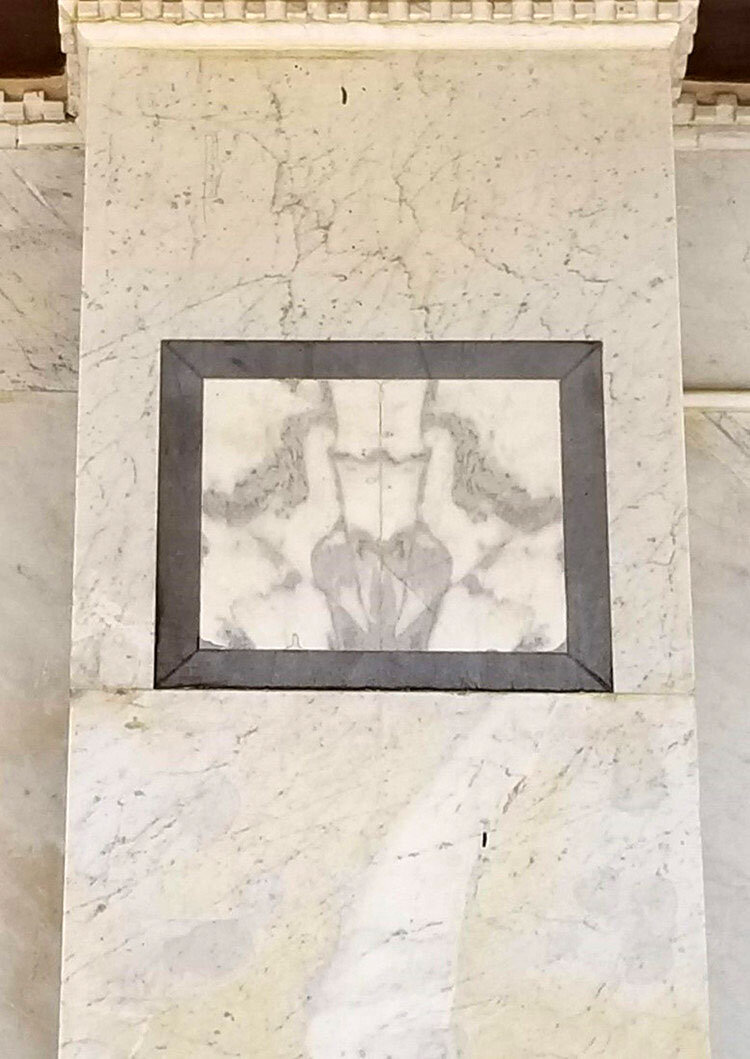 On the southern exterior wall of the Dome of the Rock, a very important Islamic shrine in Jerusalem’s Old City, there are two marble slabs, both carved from the same stone and placed side by side to form a symmetrical pattern, that depicts two birds. In a recent article published in the Journal of Near Eastern Studies, “Solomon and The Petrified Birds on the Dome of the Rock,” author Elon Harvey explores the history of this marble decoration and describes how different narratives about Solomon and two birds contributed to the multiple understandings of this imagery.

According to this article, there are six factors that contribute to the significance of the birds‘ imagery: (1) it breaks the symmetry that characterizes the Dome of the Rock’s southern wall; (2) it is placed in the southern entrance, which is the main entrance to the Dome of the Rock; (3) there are no other depictions of animals or living creatures on the Dome of the Rock; (4) the imagery bears resemblance to carved depictions of birds in Frankish structures in the region; (5) the imagery has remained in the same spot for at least 350 years in spite of extensive renovations; and (6) the techniques for producing symmetrical imagery from marble point suggest a Byzantine and, perhaps, Christian origin.

In terms of narratives that describe the significance of the two birds, the earliest account is attributed to Evliya Celebi in 1672, who described it as an imagery that shows a “miracle of God.” In the 18th century, Elzear Horn, a Franciscan missionary, described local accounts that tells the story of a stonecutter who found the two birds “formed… by nature itself.”

A main departure from these two accounts, however, is found in later narratives that emphasize the story of Solomon and the two birds. Two 19th century accounts by Lievin de Hamme and Ermette Pierotti, respectively, describe the birds as magpies who defied Solomon’s orders to contribute to the building of the Temple, and, as a result, were petrified as a punishment. In the beginning of the 20th century, James Edward Hanauer noted a local tale that describes how Solomon punished a male bird for boasting to a female bird: because the male bird boasted that he himself could tear down all of Solomon’s edifices, Solomon turned both birds into stone. Later on, Haim Schwarzbaum, a 20th century folklorist, demonstrated that Hanauer’s tale is a narrative with Sufi origins dating back to the beginning of the 10th century CE.

According to this article, however, Schwarzbaum’s work points towards older Sufi narratives that date back to, at the latest, the 9th century C.E. These Sufi narratives are recorded by three figures: al-Qushayr, al-Kahra’iti, and Abu Tahir al-Silafi. In these versions, the birds were not petrified as a punishment. Rather, even after a male bird boasted to a lover that he can single-handedly topple the Dome of Solomon, Solomon acknowledged the bird’s plea that the words of lovers should not be held against them. Afterall, those attempting to impress their love interests tend to get carried away with their words.

In conclusion, this article suggests that the legend of Solomon and the birds developed over time until it was finally associated with the Dome of the Rock. As the author argues, stories about the two birds demonstrate that “Sufi traditions and the figure of Solomon were still very influential in shaping the appearance and conception of the Dome of the Rock.”

Use of neonicotinoids found to reduce some bird populations

More information:
Elon Harvey, Solomon and The Petrified Birds on the Dome of the Rock, Journal of Near Eastern Studies (2020). DOI: 10.1086/710191
Provided by
University of Chicago

Citation:
Tradition of petrified birds in the Dome of the Rock (2020, October 20)
retrieved 20 October 2020
from https://phys.org/news/2020-10-tradition-petrified-birds-dome.html