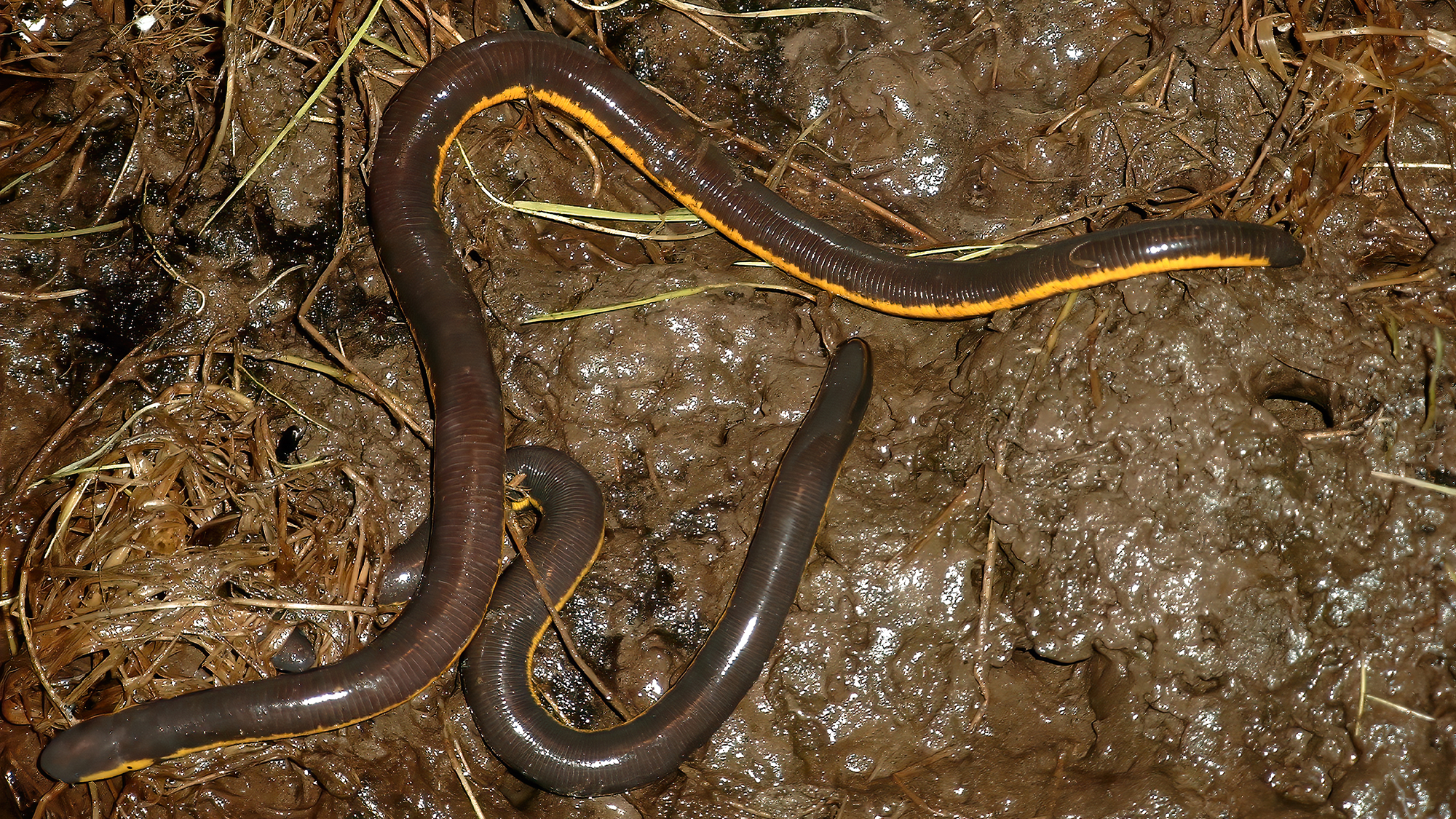 When you think of an amphibian, the first thing to jump to mind is probably a springy frog or a salamander or maybe a giant cane toad. But some newly found fossils of a lesser known amphibian order called caecilians—limbless, worm-like critters that live and burrow underground—could fill in some big evolutionary gaps in how present day amphibians came to be.

Caecilians look kind of like large earthworms and there are over 124 known species of them. Like all amphibians, they find themselves at home in both water and land. Modern caecilians are now exclusively home to southern Asia, South and Central America, and parts of Africa. Their enigmatic underground lives make them difficult for scientists to study, and while they can live up to 13 years long in captivity, it’s unknown exactly how long they live in the wild.

Previously, only 10 fossil caecilian occurrences have been found by scientists, and they date back roughly 183 million years ago to the Early Jurassic Period.

Now, a team of paleontologists have unearthed a new and older caecilian fossil, extending the record of this small animal by roughly 35 million years, all the way back to the Triassic Period (roughly 250 million to 200 million years ago). This fossil has a reddish hue and offers some clues into what the weird family of creatures may have looked like. The fossil find is described in a study published January 25 in the journal Nature.

“Seeing the first jaw under the microscope, with its distinctive double row of teeth, sent chills down my back,” Virginia Tech doctoral student Ben Klingman and co-author of the new study said in a statement. “We immediately knew it was a caecilian, the oldest caecilian fossil ever found, and a once-in-a-lifetime discovery.”

Klingman named the new fossil “Funcusvermis gilmorei.” The genus name ‘Funcusvermis’ was inspired by a song by the Ohio Players called “Funky Worm,” a favorite excavation tune for the authors.

Funcusvermis shares some skeletal features with early frog and salamander fossils and an ancient group of amphibians called dissorophoid temnospondyls. “Unlike living caecilians, Funcusvermis lacks many adaptations associated with burrowing underground, indicating a slower acquisition of features associated with an underground lifestyle in the early stages of caecilian evolution,” Klingman said.

The discovery was found in Arizona’s Petrified Forest National Park during a dig in 2019. The fossils were found in a part of the park nicknamed Thunderstorm Ridge that is well known for fossil discoveries. They were deposited in a layer of the Chinle Formation dated to approximately 220 million years ago. At the time, the state of Arizona was near the equator at the central part of the ancient supercontinent Pangaea. Like today, the region was hot, but unlike today, it was much more humid.

At least 70 individuals of Funcusvermis have been recovered as of summer 2022 at Petrified Forest National Park. Only a handful of Funcusvermis bones have been found, but until the team can find a complete skeleton, they cannot exactly determine the body length of Funcusvermis. Early inferences estimate that it was pretty tiny since remains of its lower jaws are less than a quarter inch long.

“The discovery of the oldest caecilian fossils highlights the crucial nature of new fossil evidence. Many of the biggest outstanding questions in paleontology and evolution cannot be resolved without fossils like this,”said Kligman. “Fossil caecilians are extraordinarily rare, and they are found accidentally when paleontologists are searching for the fossils of other more common animals.”