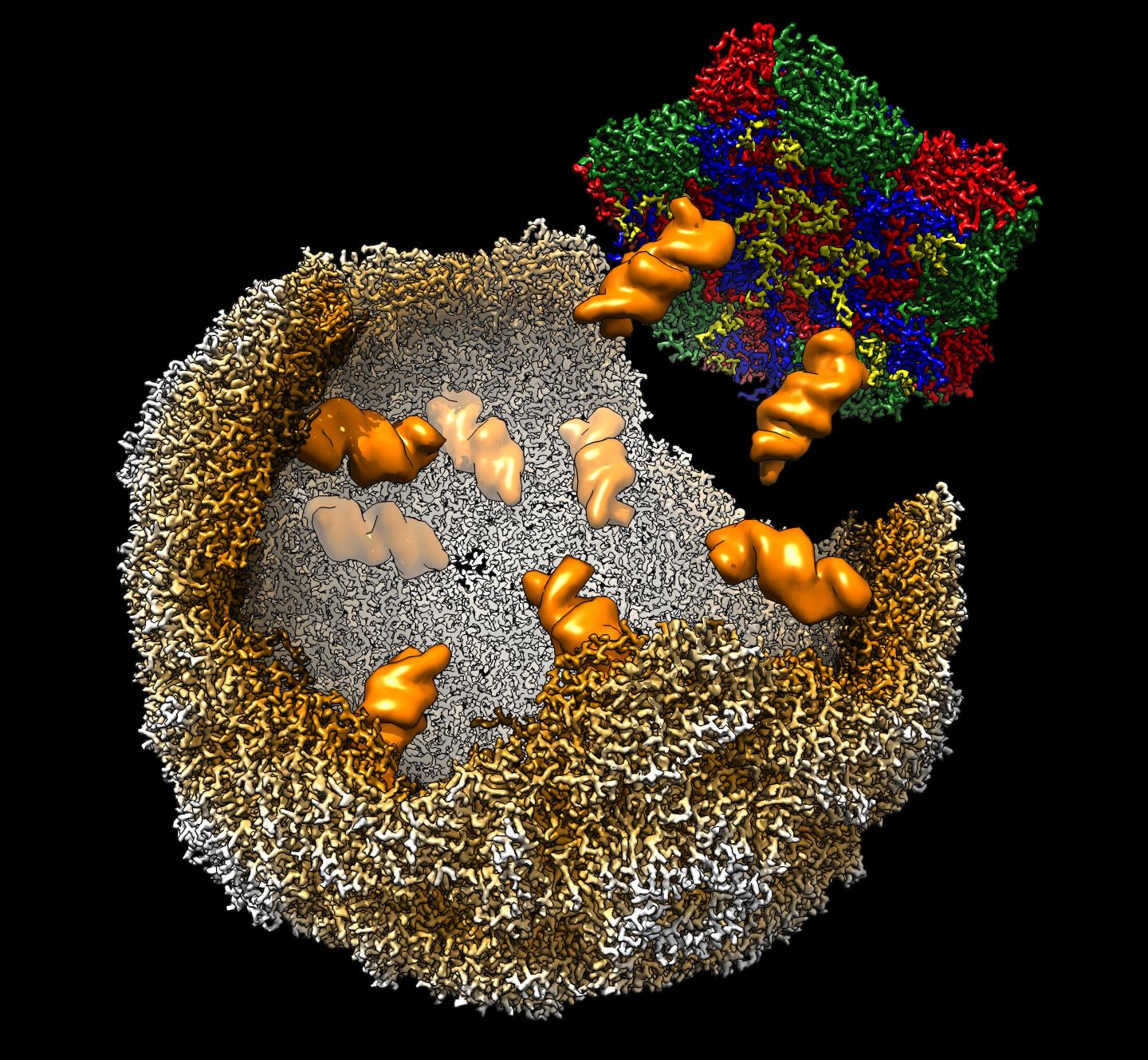 Researchers have for the first time identified the way viruses like the poliovirus and the common cold virus ‘package up’ their genetic code, allowing them to infect cells.

The findings, published today (Friday, 8 January) in the journal PLOS Pathogens by a team from the Universities of Leeds and York, open up the possibility that drugs or anti-viral agents can be developed that would stop such infections.

Once a cell is infected, a virus needs to spread its genetic material to other cells. This is a complex process involving the creation of what are known as virions – newly-formed infectious copies of the virus. Each virion is a protein shell containing a complete copy of the virus’s genetic code. The virions can then infect other cells and cause disease.

What has been a mystery until now is a detailed understanding of the way the virus assembles these daughter virions.

Professor Peter Stockley, former Director of the Astbury Centre for Structural Molecular Biology at Leeds, who part supervised the research with Professor Reidun Twarock from York, said: “This study is extremely important because of the way it shifts our thinking about how we can control some viral diseases. If we can disrupt the mechanism of virion formation, then there is the potential to stop an infection in its tracks.”

“Our analysis suggests that the molecular features that control the process of virion formation are genetically conserved, meaning they do not mutate easily – reducing the risk that the virus could change and make any new drugs ineffective.”

The research at Leeds and York brings together experts in the molecular structure of viruses, electron microscopy and mathematical biology.

The study focuses on a harmless bovine virus that is non-infectious in people, Enterovirus-E, which is the universally adopted surrogate for the poliovirus. The poliovirus is a dangerous virus that infects people, causing polio and is the target of a virus eradication initiative by the World Health Organization.

The enterovirus group also includes the human rhinovirus, which causes the common cold.

The study published today details the role of what are called RNA packaging signals, short regions of the RNA molecule which together with proteins from the virus’s casing ensure accurate and efficient formation of an infectious virion.

Using a combination of molecular and mathematical biology, the researchers were able to identify possible sites on the RNA molecule that could act as packaging signals. Using advanced electron microscopes at the Astbury Biostructure Laboratory at the University of Leeds, scientists were able to directly visualise this process – the first time that has been possible with any virus of this type.

Professor Twarock added: “Understanding in detail how this process works, and the fact that it appears conserved in an entire family of viral pathogens, will enable the pharmaceutical industry to develop anti-viral agents that can block these key interactions and prevent disease.”

For further information please contact David Lewis in the press office at the University of Leeds: d.lewis@leeds.ac.uk or on 07710 013287

The paper can be downloaded once the embargo lifts by following this link: https://journals.plos.org/plospathogens/article?id=10.1371/journal.ppat.1009146.%20

The visualisation can be downloaded by following this link.

The University of Leeds is one of the largest higher education institutions in the UK, with more than 37,000 students from more than 150 different countries, and a member of the Russell Group of research-intensive universities. The University plays a significant role in the Turing, Rosalind Franklin and Royce Institutes.

We are a top ten university for research and impact power in the UK, according to the 2014 Research Excellence Framework, and are in the top 100 of the QS World University Rankings 2019.

The University was awarded a Gold rating by the Government’s Teaching Excellence Framework in 2017, recognising its ‘consistently outstanding’ teaching and learning provision. Twenty-six of our academics have been awarded National Teaching Fellowships – more than any other institution in England, Northern Ireland and Wales – reflecting the excellence of our teaching. http://www.leeds.ac.uk