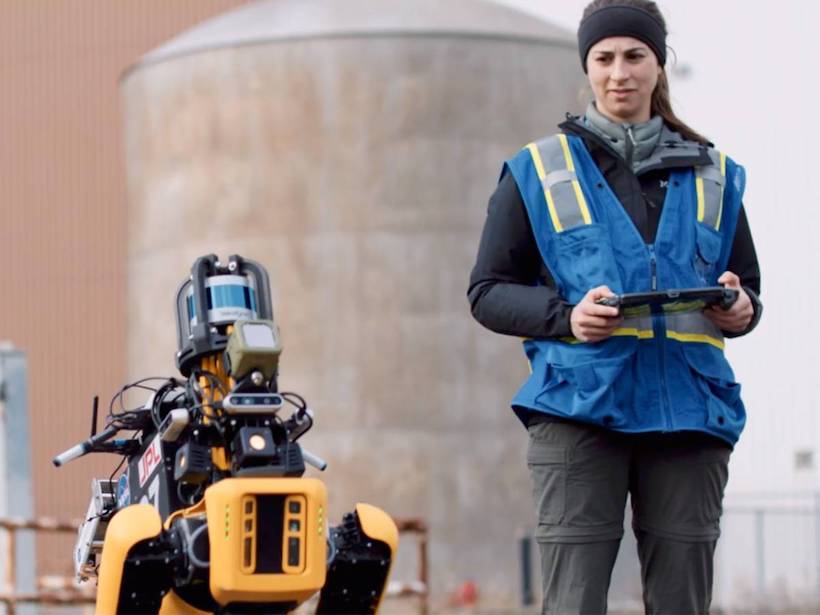 A pack of four-legged robotic dogs may rove across regions of the rugged Martian landscape never reached before. Known as “Mars Dogs,” the robots are designed to explore deep lava tube caves on the Red Planet to search for evidence of past or existing life—as well as potential sites for building future human colonies.

“The Mars caves are places with high astrobiological potential,” said Ana-Catalina Plesa, a planetary scientist at the German Aerospace Center who was not involved in the Mars Dogs research. However, Plesa explained, the caves are not easily accessible to current rovers. “[Mars Dogs] may be more reliable in these kind of areas because they have a different way of traveling.”

With high inclines, large boulders, and deep pits, the surface of Mars is a treacherous obstacle course.

To avoid tipping over, traditional wheeled rovers must remain on relatively flat regions. In contrast, lava tubes—formed when subsurface lava flows created tunnels after volcanic eruptions—typically exist at high elevations that are inaccessible to landing. Today’s rovers would need to land in a low-lying region and climb up, a forbidding journey that could take years.

Even if a rover could reach the caves, it would have to descend through a steep entrance. Cave walls would act as a shield against communication with scientists on Earth, leaving the robot to navigate and perform missions on its own.

Enter Mars Dogs, built by scientists at NASA’s Jet Propulsion Laboratory (JPL) and the California Institute of Technology (Caltech). These artificially intelligent, four-legged robots—provided by Boston Dynamics and called “Autonomous Spot,” or “Au-Spot”—are designed to plumb the depths of Martian caves. Engineers tested their creations in lava tubes at Northern California’s Lava Beds National Monument, an environment comparable to what they would face on Mars.

Each robot can walk as fast as 5 kilometers per hour, or 38 times faster than the Curiosity rover that has explored Mars since 2012. Unlike Curiosity, a Mars Dog can autonomously travel dozens of kilometers over extreme terrains. To successfully navigate dark lava tubes, scientists are developing a recovery algorithm to help the robot stay upright and recover if it does topple.

“We are teaching the robot to be able to expect the unexpected while exploring,” said lead researcher Thomas Touma, a robotics engineer at NASA JPL.

Scientists are also working on a robotic arm to interact with the environment and a tethering system to allow a pack of Mars Dogs to work together to lower themselves into caves. While inside, the robots could continue to act in synergy. They could also talk to their counterparts, share what they are seeing in real time, charge each other, and help one another store samples.

“The possibilities are endless because these robots are perceptually aware and actively learning,” Touma said.

With no substantial atmosphere, Mars is hostile to life at the surface. The lava tube caves, shielded from drastically varying temperatures and bombardment by radiation, may be better suited to preserve biological evidence from the planet’s wetter past. They may also be adaptable for future human colonies, Touma said.

The Red Planet won’t see these four-legged explorers any time soon, however.

“While we are getting really close to having a walking system on the surface of Moon or Mars, there are still a lot of technical questions that need to be answered and a lot of advanced engineering that needs to be done to make these systems flight ready,” said NASA JPL robotics engineer and senior researcher Ali Agha.

Understanding room temperature superconductivity one step closer thanks to researchers looking at the effects of pressure. Understanding the nature of superconductivity is one of the...
Two women are bundled up in cold weather clothing while walking during a frigid weather snap, Friday, Feb. 3, 2023, in Portsmouth, N.H. Windchills in...
The moon exerts a previously unknown tidal force on the "plasma ocean" surrounding Earth's upper atmosphere, creating fluctuations that are similar to the tides in...
A newfound species of frog doesn’t ribbit. In fact, it doesn’t make any sound at all. Many frogs have unusual characteristics, from turning translucent to...
In a study publishing in the journal Cell Stem Cell on February 2, researchers show that brain organoids -- clumps of lab-grown neurons -- can...
A type of material that allows the flow of electricity with little resistance is called a conductor. Like the copper in the electrical wiring in...