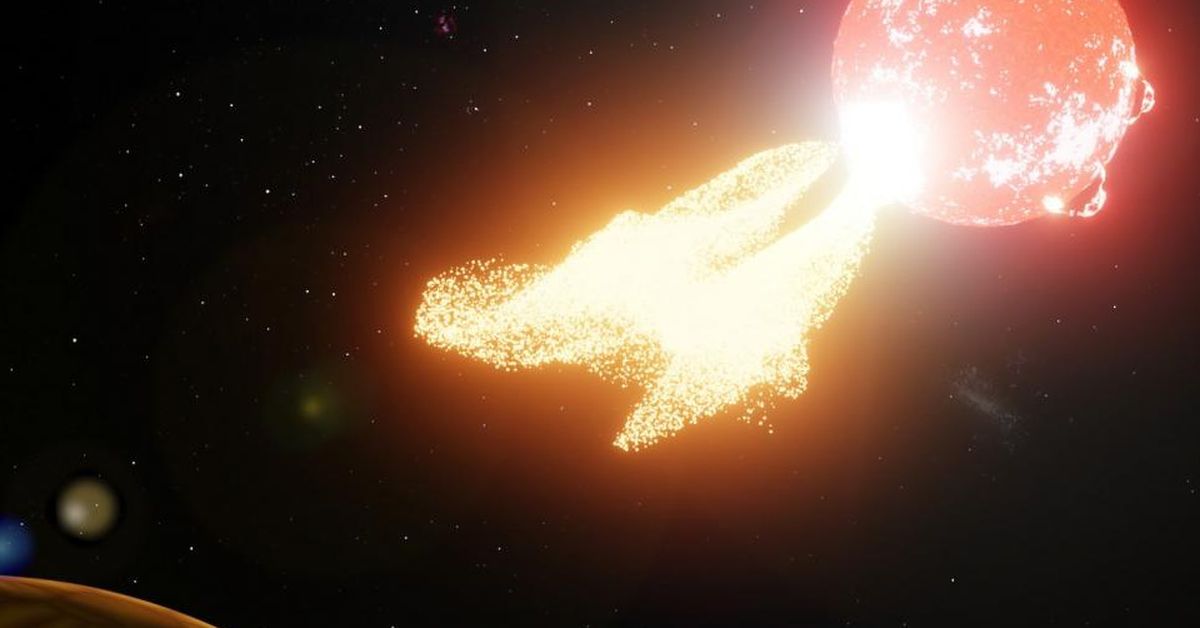 Artist’s impression of flare from our neighboring star Proxima Centauri ejecting material onto a nearby planet. (Mark Myers/OzGrav/)

Earth regularly endures highly charged belches from our Sun, sometimes even prompting a dancing curtain of ever-changing color known as aurora. But could similar violent eruptions in other solar systems make far-off worlds inhospitable to life?

Earlier this year, astronomers confirmed there were two Earth-like planets orbiting the cool, faint red dwarf Proxima Centauri—the closest star to our sun at 4.2 light-years away. One of them, Proxima Centauri b, is in its star’s habitable zone where temperatures might allow liquid water to exist on its surface.

In a new study, outlined today in The Astrophysical Journal, researchers used a suite of optical telescopes, including NASA’s Transiting Exoplanet Survey Satellite and Australian-based radio telescopes like the Australian Square Kilometre Array Pathfinder (ASKAP) and Zadko Telescope at the University of Western Australia, to observe the stars for 11 nights in a row. Hyper-energetic sun burps are usually harmless here on Earth thanks to our planet’s magnetosphere, but the team was curious what they might look like in other systems. On planets without a magnetic shield, all of that energy could easily wipe out life.

“We thought that Proxima Centauri would be a great sort of laboratory for understanding these phenomena,” says lead author Andrew Zic, who undertook the research while at the University of Sydney. Sure enough, they caught a solar flare and a series of radio bursts. The simultaneous observations allowed the team to link the two events; according to Zic, there is a probability of less than one in 128,000 that they weren’t related.

Red dwarfs are very active stars, crackling with activity and hurling blistering pulses of energy into space. Often, Zic says, solar flares are accompanied by the release of giant bubbles of stellar material known as coronal mass ejections, or CMEs. The findings strongly suggest planets around this type of star—by far the most abundant in the cosmos—are likely to be showered with a lot of punishment over the eons in the form of powerful stellar flares and plasma ejections, dampening hopes that some type of life could exist on its surface.

While Earth gets barraged with intense blasts of solar plasma, our planet’s magnetic field shields us. Whether the exoplanets orbiting our solar system’s nearest neighbor have similar shields remains an open question.

“We think this is a very good indication that we’re seeing for the first time, some solar-like radio burst activity from Proxima Cen that indicates that there may be space weather events occurring around the star,” Zic says.

Still, coronal mass ejections are observationally elusive, and not everyone is convinced that the team truly spotted one. The characteristic burst of radio noise indicated it was a type IV burst,– known for its trailing long-duration. Ofer Cohen, a solar physicist at the University of Massachusetts at Lowell who was not involved in the study, says that “the flare is obviously there, but it is not guaranteed that a CME had been launched from the star.” In his view, a type II radio burst would be a better bet for confirming a CME, since it indicates the shockwave in front of the stellar belch.

Zic agrees that the prospect of finding type II bursts around active stars like Proxima Centauri is a very exciting one. “It would be a really exciting detection because you can actually sort of make out some of the details of the coronal mass ejection.” On the other hand, if a coronal mass ejection is like a bullet leaving a gun, a “type IV burst is a bit like the smoke from the gun.”

Although it’s not direct evidence of a red dwarf CME, it’s the most compelling evidence for a solar-like radio burst from another star to date. And if it’s true, it could mean lower chances of life in our nearest star system. But the picture isn’t totally complete yet. Researchers like Zic are hoping they’ll be able to detect similar events in order to map out the dramatic effects of space weather on solar systems beyond our own.