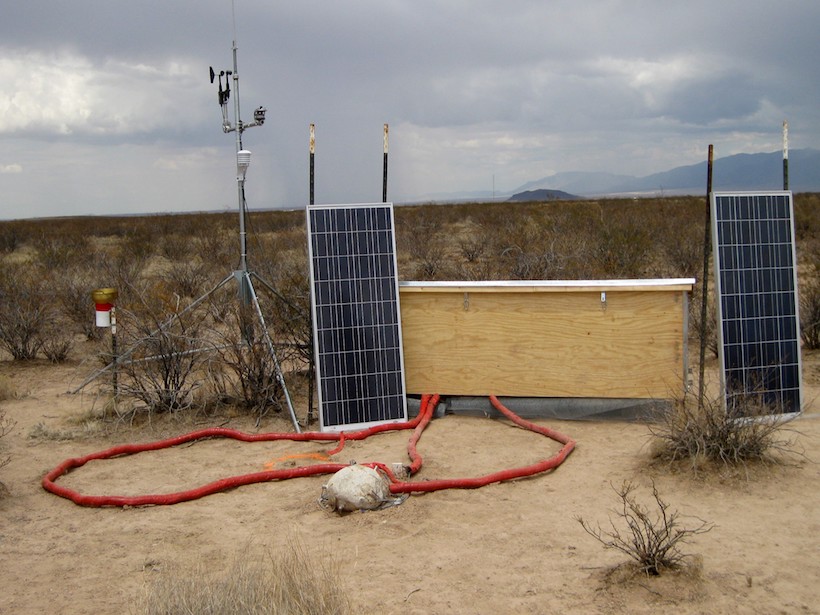 Wetter and warmer climates accelerate mechanical rock weathering, according to new research. Findings by Eppes et al. reveal new links between climate and the breakdown of rocks, which affects the global carbon cycle—the movement of carbon between the oceans, atmosphere, and crust over geologic timescales.

By listening over years for telltale sounds of cracking inside boulders, researchers found that higher temperatures and moister air corresponded to higher rates of fracture growth in the rocks.

“[This] work is really great in highlighting that ubiquitous, everyday conditions can cause a rock to break down,” said Suzanne Anderson, a geomorphologist at the University of Colorado Boulder who was not involved in the study. “You just need enough time for these processes to work,” she said.

Weathering describes the breakdown of rocks and minerals into smaller bits and new minerals. Soils, for example, are created by the physical disintegration and chemical modification of bedrock. As rocks break down, they can also release carbon and other materials to rivers and oceans.

Mechanical weathering involves physical forces breaking apart a rock without changing its composition, like when glass breaks. Chemical weathering, on the other hand, involves changes at the molecular level. Acidic rainwater, for example, can kick-start chemical reactions on a rock surface and free up molecules that wash away.

Subcritical cracking is analogous to the weeks-long growth of a crack on a car windshield.

Weathering doesn’t affect only rock surfaces, however, nor does it necessarily occur quickly. Inside a rock, a slow, less visible type of rock breaking known as subcritical cracking can break apart molecular bonds over long timescales. Subcritical cracking is analogous to the weeks-long growth of a crack on a car windshield, as opposed to the rapid cracking that occurs if you hit the same windshield with a hammer, said Martha Cary “Missy” Eppes, a geomorphologist at the University of North Carolina at Charlotte and lead author of the new research, published in AGU’s Geophysical Research Letters.

“The crack grows slowly and steadily, with very low forces being applied to that crack,” she said. At the tips of these cracks, chemical conditions can promote reactions that in turn make the surrounding area more susceptible to physical forces. “Most people know that chemical reactions usually occur more quickly at hotter temperatures, but scientists had not thought much about how that might relate to physical weathering,” Eppes said. In a 2017 paper, Eppes and colleague Russ Keanini developed computer models that indicated that natural environmental changes could affect crack tips and promote weathering by subcritical cracking.

The newly published results provide experiment confirmation of the behavior predicted by the models. The researchers set up boulders in North Carolina and New Mexico and attached multiple sensors to each rock to listen for signs of subcritical cracking over years. These sensors are like miniature seismographs, Eppes said. The researchers also collected weather data, including temperatures and relative humidities, at the two sites.

They found that the biggest driver of cracking—once physical forces were accounted for—was the amount of water vapor in the air. Higher temperatures also increased cracking rates, to a lesser degree. Since the atmosphere can hold more water as it gets warmer, the findings support the idea that global warming could lead to increased mechanical rock weathering. These findings also support the hypothesis that the environment can influence activity at subcritical crack tips.

Future experiments by the researchers will investigate how warmer and wetter conditions affect weathering of different types of rock. The results could have important implications not only for natural systems but also for human-engineered ones as well. (Geophysical Research Letters, https://doi.org/10.1029/2020GL089062, 2020)