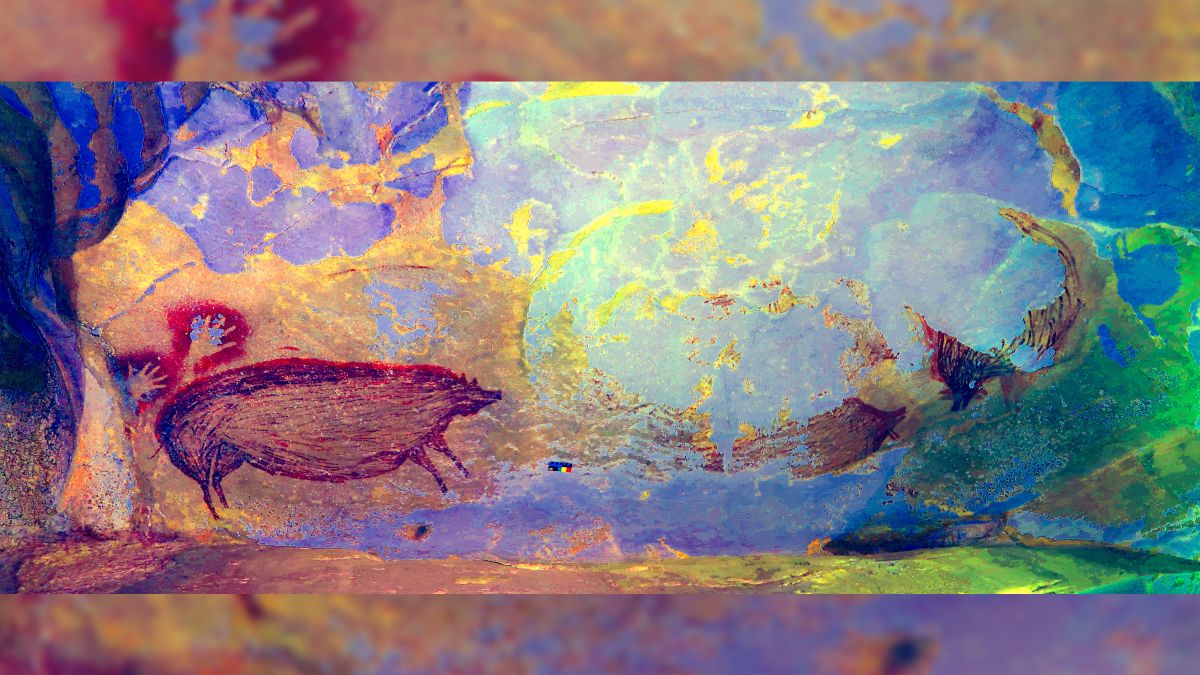 The oldest-known animal drawing in the world is a 45,500-year-old depiction of a hairy, warty pig on a cave wall in Indonesia, a new study finds.

The mulberry colored painting, drawn with the red mineral ochre, shows the profile of what is likely a Sulawesi warty pig (Sus celebensis), a wild stubby-legged beast with facial warts that can weigh up to nearly 190 pounds (85 kilograms). These pigs “are still found there today, although in ever-dwindling numbers,” said study co-lead researcher Adam Brumm, a professor of archaeology at Griffith University’s Australian Research Centre for Human Evolution.

The finding provides more evidence that ancient Indonesia was a hot spot for rock art, and that “the first rock art traditions probably did not arise in ice age Europe as long supposed,” Brumm told Live Science in an email.

In December 2017, Brumm and his colleagues found at least three warty pig drawings in Leang Tedongnge Cave, on Sulawesi, an Indonesian island that’s slightly larger than Florida. This cave was in a small valley now inhabited by Bugis farmers, an enthic group in Indonesia. “There are no roads to this valley; getting there from the adjacent lowlands requires an arduous trek along a forest path that leads up into the limestone hills and ends at a narrow cave passage — this is the only entrance to the valley,” Brumm said.

So, despite the valley’s proximity to the large city of Makassar, “according to the people who live in this valley, no Westerners had ever set foot in the place before,” said Brumm, who worked with an international team from Australia and Indonesia on the study, published online Wednesday (Jan. 13) in the journal Science Advances.

Of the few pig drawings in the limestone cave, the most well-preserved one is the oldest. It shows a large pig — measuring about 4.5 by 1.8 feet (136 by 54 centimeters), with the outlines of two human hands painted above its rump. The hairy, tiny-tailed porker faces two or three other pigs, which are less well-preserved and appear to be having some kind of social interaction with the giant pig.

In a nearby cave, called Leang Balangajia 1, the team spotted an even larger painted pig on the ceiling, measuring about 6.1 by 3.6 feet (187 by 110 cm), with four stenciled hands on it. That cave chamber has at least two other animal paintings, but they are too damaged to decipher, the researchers said. A few anatomical clues hint that the rock art in both caves depicts adult male pigs — for instance, they’re painted with impressive facial warts, which are larger in adult males than in females.

So, why were pigs popular subjects for the caves’ artists?

Sulawesi warty pigs are unique to that island — they evolved there in isolation hundreds of thousands of years ago, Brumm said. Archaeological evidence suggests that humans hunted and even domesticated these pigs. “So, it seems clear that early humans interacted closely with this pig on various levels for a very long period of time,” Brumm said. “In fact, the ice age artists of Sulawesi almost seem to have been obsessed with warty pigs, which is perhaps not surprising given their economic importance.”

Previously, the oldest-known rock art depicting an animal, a Sulawesi warty pig found in another cave on the island, dated to at least 43,900 years ago, according to a 2019 study published in the journal Nature, which was also discovered by Brumm and colleagues, including Maxime Aubert, an archaeologist and geochemist at Griffith University. Meanwhile, the oldest known drawing (of any kind) made by a human is a 73,000-year-old hashtag painted on a rock flake from South Africa, Live Science previously reported.

To date the newfound rock art, the team sampled a few calcite minerals that had “grown” over the pigs after they were painted. The researchers did this by using uranium-series dating, a method that measures uranium’s radioactive decay. When rainwater seeps through a limestone cave, it dissolves tiny amounts of uranium, which decays over time into the element thorium. By measuring the ratio of uranium to thorium in each mineral sample, the scientists determined when the minerals started growing over the paintings.

This technique revealed that the warty pig from Leang Tedongnge was at least 45,500 years old, while the swine on the ceiling from Leang Balangajia 1 dated back at least 32,000 years. In addition to being the oldest-known rock art painting of an animal, the Leang Tedongnge pig is the “earliest known representational work of art in the world,” and possibly the earliest evidence of modern humans on Sulawesi, if one assumes that modern humans (and not a closely related human relative, like the Denisovans) painted the pigs, the researchers wrote in the study.

However, the researchers had a number of technical difficulties with the uranium–thorium dating, which they acknowledge, but which make the dates rough estimates, said David Pearce, an associate professor at the Rock Art Research Institute at the University of the Witwatersrand in South Africa, who was not involved with the research. “It is important to remember that they are relative ages … rather than direct dates on the paintings themselves,” Pearce told Live Science in an email.

The dating issues were also noted by João Zilhão, a professor at the Catalan Institution for Research and Advanced Studies (ICREA) at the University of Barcelona, who was not involved in the study. But “what this paper does is corroborate their previous finding that rock paintings were being made in Indonesia more than 43,900 years ago,” he told Live Science.