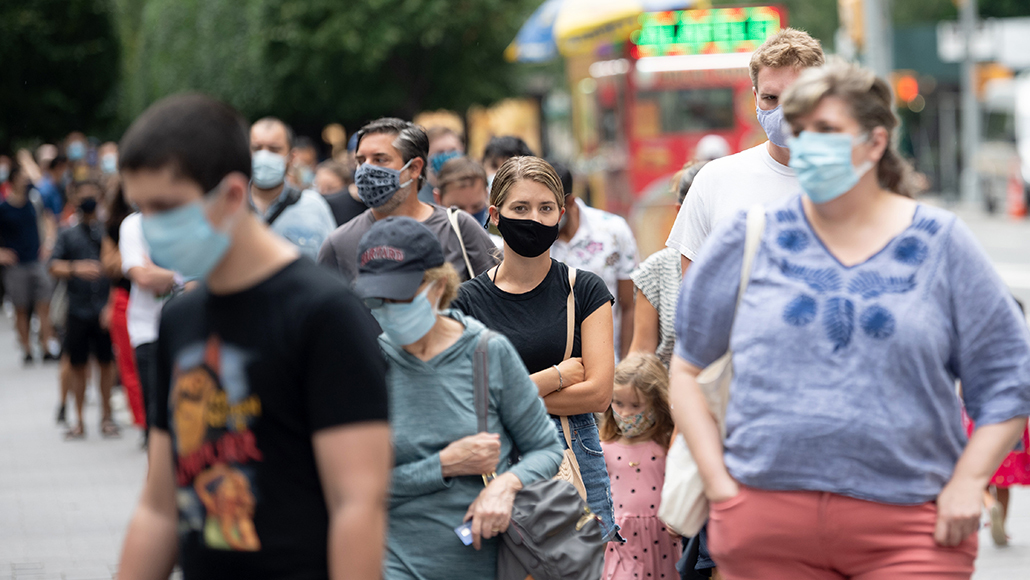 Even as U.S. President Donald Trump claims his bout with COVID-19 has granted him immunity, reports of people getting the disease a second time are emerging. While reinfection still appears to be rare, it remains unclear to what extent immunity can truly protect a person.

Immunity is also in the news because a debate is simmering among scientists over herd immunity, the point at which enough people are immune to a pathogen to slow its spread (SN: 3/24/20). While herd immunity might put the end of the pandemic in sight, experts estimate that around 40 to 60 percent of a population would need to be infected to reach it.

One group of researchers is pushing for governments to reach herd immunity without a vaccine, by allowing COVID-19 to spread among those at low risk while protecting vulnerable populations. This approach, however, puts the entire population at risk of significant illness and death, another group argues in a letter published October 14 in the Lancet.

Because SARS-CoV-2 is a new virus, scientists can’t say how long a person will be protected after they’ve recovered from an infection. If immunity wanes quickly, that sets the stage for recurrent outbreaks unless there’s a vaccine, the authors say.

Here’s what we know so far about our long-term defenses against the coronavirus:

What does “immunity” really mean?

To scientists, immunity means a resistance to a disease gained through the immune system’s exposure to it, either by infection or through vaccination. But immunity doesn’t always mean complete protection from the virus.

How does the body build immunity?

The immune system has two ways to provide lasting protection: T cells that remember the pathogen and trigger a rapid response, and B cells that produce antibodies — proteins the body makes to fight off a specific pathogen.

Ideally, long after a person has recovered from an infection, these antibodies stick around in their blood. Then if the person is exposed to the same pathogen again in the future, those antibodies recognize the threat and work to prevent another infection from taking hold.

So-called “memory T cells” also stick around. Ideally, they live up to their name and recognize a previously encountered pathogen and either help coordinate the immune system or kill infected cells.

With one type of immunity, called sterilizing immunity, the virus never gets a chance to begin replicating and never infects a cell. Sterilizing immunity, however, is hard to achieve. More often, people achieve partial immunity, which provides a rapid response that may make the second bout of the disease less severe, or less easily transmitted to others.

It’s unclear what type of immunity people who have recovered from COVID-19 have, and only time will tell. A vaccine could possibly trigger a stronger immune response than a natural infection, although it’s yet to be seen if that will be the case for the coronavirus vaccines in trials (SN: 7/10/20).

If a person has antibodies, are they immune?

For some illnesses, like measles, antibodies may last a lifetime. But for SARS-CoV-2, the jury is still out. It’s unknown how long antibodies last in the blood, or — importantly — whether their presence is a sign of immunity. Just because a person has antibodies, it doesn’t mean they are effective at fighting the virus.

Neutralizing antibodies are ones that halt the virus in its tracks, stopping it from infecting a host cell and replicating. Such antibodies typically recognize the virus’ spike protein, which helps it break into host cells. So far, those kinds of antibodies have been a focus of studies seeking to understand whether a person may be immune.

“For the majority of people, it does appear that they are generating neutralizing antibodies,” says Aubree Gordon, an epidemiologist at the University of Michigan in Ann Arbor. “So that’s promising.”

Yet it’s still unknown what amount of neutralizing antibody is sufficient for protection. And even if they are protective, it’s unclear how long these immune proteins stick around. Studies of recovered COVID-19 patients have shown that antibodies for the coronavirus can wane after a SARS-CoV-2 infection, but overall, their levels remain relatively stable over a span of three to six months.

Because the coronavirus only began its sweep around the world at the beginning of the year, “there’s just been a limited time for people to study this,” Gordon says.

Some data suggest the immune system might not have a great memory for coronavirus infections. One study found that during a COVID-19 infection, the organ that produces memory B cells — long-lived cells that will rapidly produce antibodies if a person is re-exposed to a pathogen — doesn’t properly activate the cell types capable of becoming memory B cells. Without that immunological memory, antibodies for SARS-CoV-2 may not last very long, researchers report August 19 in Cell.

“Maybe that means that those memory responses are going to be on the short side,” says Brianne Barker, an immunologist at Drew University in Madison, N.J.

What do we know about T cells?

But the role of T cells in infection and immune memory remains unclear. Studies have shown that memory T cells can persist in patients who were infected with the coronavirus responsible for the 2003–2004 SARS outbreak for up to 11 years after recovery. Since that virus no longer circulates, however, it’s impossible to say whether those T cells might be protective.

Some people may already have T cells that can recognize pieces of the new coronavirus (SN: 5/15/20). Those immune cells may be left over from previous exposures to coronaviruses that cause the common cold, researchers report August 4 in Science. These cross-reactive T cells might help reduce the length or severity of COVID-19 illness. On the flip side, such T cells could make the disease worse, perhaps by overstimulating the immune system and causing a condition called cytokine storm, which is behind some severe COVID-19 cases.

Can you get the coronavirus twice?

Researchers have now documented a small number of cases where people have been infected with the coronavirus twice. The first such case was reported in Hong Kong, with additional reports the United States, the Netherlands and elsewhere (SN: 8/24/20).

But it’s still unclear how common reinfections are. And with only a handful of cases so far, “we can’t really say that reinfections are telling us a whole lot at this point,” Barker says, either about immunity or whether vaccines will provide long-term protection or will need to become part of our yearly routine, like flu shots.

Some reinfections are expected; some people’s immune memory may not be potent enough to prevent the infection entirely, though it may prevent them from getting sick.

It’s hard to prove that someone has been reinfected, because researchers need to conclusively show that two different viruses caused each infection, Barker says. That requires genetic testing. What’s more, experts are not necessarily on the lookout for such cases, especially in people who are not displaying symptoms.

What does all of this mean for herd immunity?

Without knowing how long immunity lasts after an infection, and how much that varies from person to person, it’s impossible to know whether ending the pandemic through herd immunity is even possible. What is clear, experts say, is that attempting to reach herd immunity without a vaccine will lead to more illness and death.

“Promoting the concept of ‘herd immunity’ … as an answer to the COVID-19 pandemic is inappropriate, irresponsible and ill-informed,” Thomas File Jr., president of the Infectious Diseases Society of America, and Judith Feinberg, chair of the HIV Medicine Association, said in a statement October 14.

And to date, herd immunity is still far off. “Throughout the United States, we are nowhere near herd immunity,” Gordon says. “Taking the approach of herd immunity through natural infection will lead to hundreds of thousands of unnecessary deaths.”