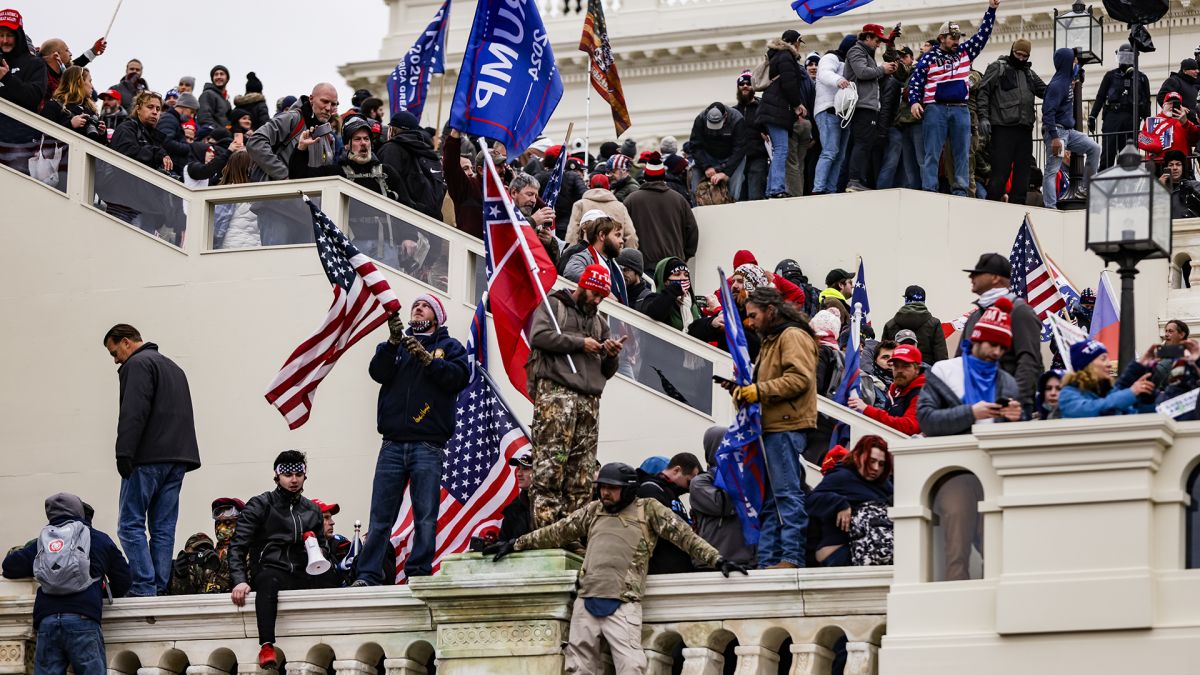 When armed supporters of President Donald Trump broke into and vandalized the United States Capitol on Jan. 6 in Washington, D.C., many were chanting “Stop the steal,” referring to President-elect Joe Biden’s victory in the recent election. Some wore sweatshirts reading “Civil War” with the date “January 6, 2021.” Their fervent cries were fueled by encouraging words from the president and from Republican leaders, who for months have falsely claimed that Trump’s loss to President-elect Biden — by more than 7 million votes — was invalid.

Trump’s ongoing refusal to accept the election results, despite having no evidence that the process or results were fraudulent in any way, has led to speculation that he planned to remain in power not by lawful means but through a coup d’état, or coup — a French term describing the overthrow of a government.

By urging invasion of the Capitol and refusing to activate the National Guard to repel the invaders, Trump appeared to embrace the notion of violence as a pathway to his continued power. This behavior is a hallmark of many leaders who have used violent coups to forcibly take control in nations around the world — even, once, in the U.S.

During a coup, a government’s executive authority is displaced or removed suddenly and by illegal means, according to the Coup D’état Project (CDP) at the University of Illinois Urbana-Champaign’s Cline Center for Advanced Social Research.

Coups are not always violent, and they typically originate with small, elite groups already within the government. However, a coup can also be triggered by military actions, the involvement of operators representing foreign governments, or popular revolts “manifested by high levels of civil unrest,” the CDP says.

The term “coup d’état,” which translates as “stroke of the state,” can be traced to the 17th century, but the first modern coup — in which coordinated efforts overthrow the government and install its replacement — is thought to be Napoleon Bonaparte’s power grab in France in 1799, according to a study published in 1994 in the journal Terrorism and Political Violence.

By the 20th century, coups were “a key feature” in politics, with “170 successful and 141 unsuccessful coups in 79 countries between 1945 and 1986,” the study author reported (13 of the coups were in Argentina alone). Cuba’s coup d’état in 1952 saw the Cuban Army derail upcoming elections and install a military dictatorship; a military coup in Bolivia in 1979 toppled the country’s first democratically elected government; and Mali’s longstanding democracy was overthrown by a coup in 2012, to name just a few.

There was even a successful coup in the U.S. on Nov. 10, 1898 in Wilmington, North Carolina by former Confederate colonel and U.S. congressman Alfred Moore Waddell, leading about 2,000 white supremacists. Enraged by “Negro domination” in local politics, the mob torched the offices of Wilmington’s Black-owned newspaper “The Daily Record” and murdered dozens of Black people, according to the Zinn Education Project.

Waddell then replaced recently-elected local officials with white supremacists, who elected him mayor. Wilmington’s Black community was decimated, with many leaders imprisoned and hundreds of people “banished” from the city, according to A North Carolina History Online Resource (ANCHOR). The event “marked a turning point in North Carolina’s history because more restrictions were placed on African American voters,” according to ANCHOR.

Related: What is the 25th amendment?

More recently, on July 15, 2016, members of the Turkish military tried to unseat President Recep Tayyip Erdoğan in an attempted coup that killed 241 people and injured more than 2,000. The coup was thwarted by thousands of citizens who mobilized in the streets, joining forces with police and loyalist soldiers to stop it, Al Jazeera reported in 2017.

However, even when coups are unsuccessful, they can still do lasting damage. A military coup in Spain in July 1936 sought to overthrow the Republic; while the rebellion went down in flames, it also sparked a civil war that lasted for three years, ending in another coup in March 1939, according to a paper published in 2019 by the Elcano Royal Institute in Madrid.

And a failed coup in Russia in 1993 led to then-leader Boris Yeltsin consolidating power in the presidency, German news agency DW Akademie reported. In doing so, Yeltsin created a constitution and a presidential authority in which an “untouchable” president was capable of shaping public policy heedless of elections and votes — a position maintained by the nation’s current leader, Vladimir Putin, DW Akademie says.

“We will never concede”

Was the Jan. 6 incident in Washington, D.C. part of an attempted coup? Prior to the storming of the Capitol, Trump spoke to thousands of his supporters at a rally outside the White House, saying “We will never give up; we will never concede,” The Los Angeles Times reported. Trump then urged the mob to march on the Capitol and demonstrate to Republicans “the kind of pride and boldness that they need to take back our country.”

After the Capitol was breached and the violence escalated, Trump ignored urgent calls to mobilize the National Guard, according to The New York Times; the Guard finally moved in only after they were authorized to do so by Vice President Mike Pence.

“It was unclear why Mr. Trump, who is still technically the commander in chief, did not give the order,” The Times reported.

As the mob of Trump supporters swarmed the Capitol, they assaulted police, smashed Capitol windows and furniture, and vandalized offices. Three people died after suffering medical emergencies during the siege, and one woman was fatally shot while inside the building; police later recovered two pipe bombs and a cooler containing explosives from the grounds, The Washington Post reported.

Trump released a recorded statement late in the afternoon saying “we had an election that was stolen from us” and telling the rioters “we love you, you’re very special.” But by the day’s end, President-elect Joe Biden’s victory was certified by U.S. lawmakers, according to the BBC. On Jan. 7 at 3:50 a.m. ET, Trump issued a statement on Twitter via White House chief of staff Dan Scavino (Twitter had locked Trump’s account for 12 hours the day before) saying “there will be an orderly transition on January 20th.”

However, Trump reiterated “I totally disagree with the outcome of the election,” adding in a second tweet: “While this represents the end of the greatest first term in presidential history, it’s only the beginning of our fight to Make America Great Again!”