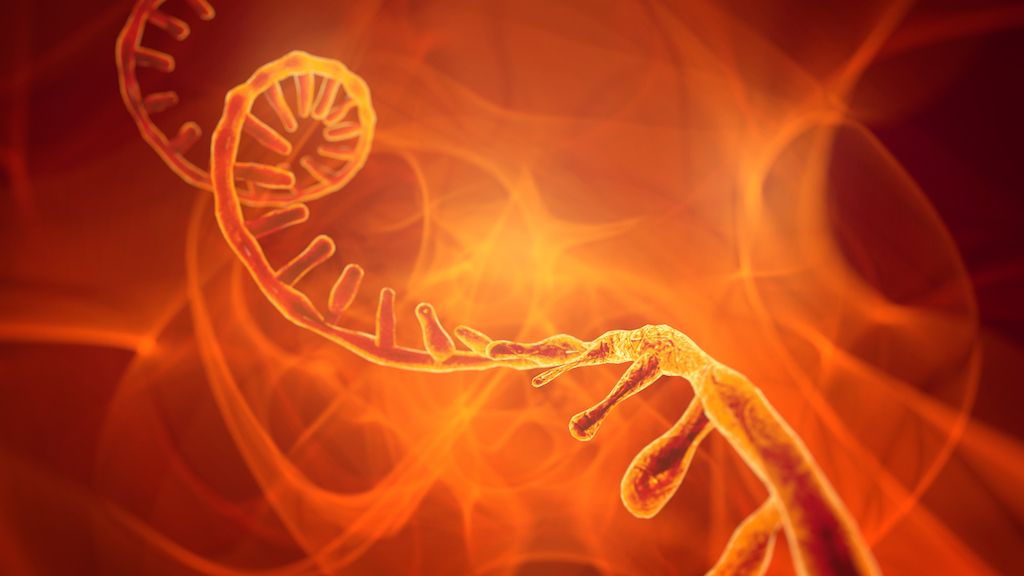 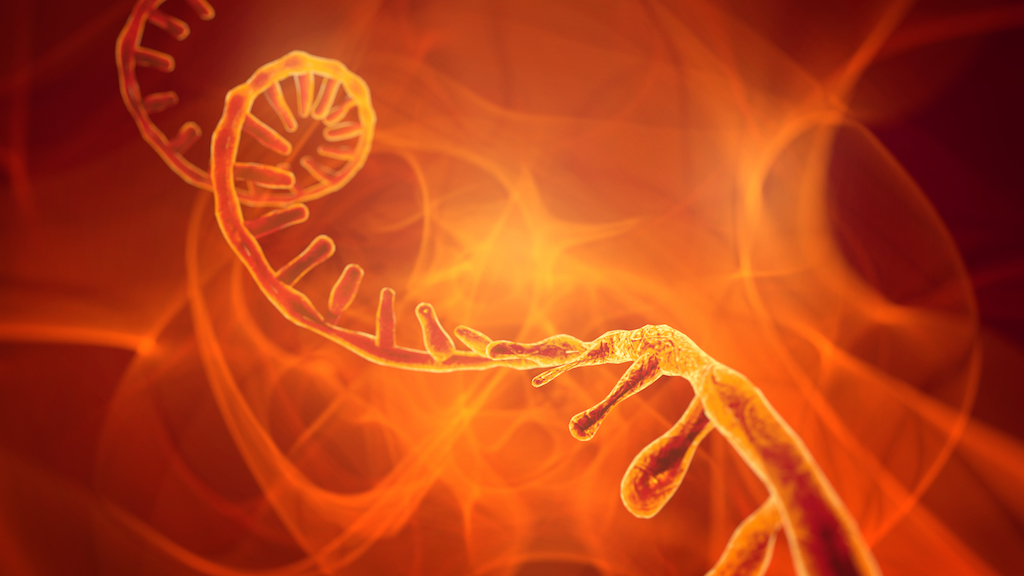 More than just DNA’s lesser-known cousin, RNA plays a central role in turning genetic information into your body’s proteins. This remarkable molecule also carries the genetic instructions for many viruses, and it may have helped life get its start.

Together, RNA, short for ribonucleic acid, and DNA, short for deoxyribonucleic acid, make up the nucleic acids, one of the three or four classes of major “macromolecules” considered crucial for life. (The others are proteins and lipids. Many scientists also place carbohydrates in this group.) Macromolecules are very large molecules, often consisting of repeating subunits. RNA and DNA are made up of subunits called nucleotides.

“RNA in a basic way is the biomolecule that connects DNA and proteins,” Chuan He, a University of Chicago biologist who studies RNA modifications, told Live Science.

The ability of RNA and DNA to store and copy information depends on the molecules’ repeating nucleotide subunits. The nucleotides are organized in specific sequences, which can be read like letters in a word.

Each nucleotide has three major parts: a sugar molecule, a phosphate group and a cyclic compound called a nucleobase, or base. Sugars from different nucleotide units hook up via phosphate bridges to create the repeating polymer of an RNA or DNA molecule — like a necklace made of sugar beads linked together by phosphate strings.

The nucleobases attached to the sugars constitute the sequence information needed to build proteins, as described by the National Human Genome Research Institute. RNA and DNA each have a set of four bases: adenine, guanine, cytosine and thymine for DNA, with uracil swapping in for thymine in RNA. The four bases make up the molecules’ alphabets, and as such, are denoted as letters: A for adenine, G for guanine and so forth.

Related: How to speak genetics: A glossary

But RNA and DNA can do more than just encode “letter” sequences; they can also copy them. This works because the bases on one RNA or DNA string can stick to bases on another string,  but only in a very specific way. Bases link up only with “complementary” partners: C to G and A to U in RNA (or A to T in the case of DNA). So, DNA serves as a template to transcribe an RNA molecule, which mirrors the DNA sequence — encoding a record of it.

A type of RNA called messenger RNA (mRNA) uses this copying function to ferry genetic data from DNA to the ribosomes, the protein-producing components of the cell, according to the University of Massachusetts. Ribosomes “read” mRNA sequences to determine the order in which protein subunits (amino acids) should join a growing protein molecule.

Two other RNA species complete the process: Transfer RNA (tRNA) brings amino acids specified by mRNA to the ribosomes, while ribosomal RNA (rRNA), which makes up the bulk of a ribosome, links the amino acids together.

RNA as an enzyme

Scientists consider RNA’s central dogma activities central to the molecule’s definition. But ideas about what RNA is and what it can do have greatly expanded since the 1980s, when biologists Sidney Altman and Thomas R. Cech discovered that RNA can operate like a protein. (The researchers won the 1989 Nobel Prize in Chemistry for their discovery.)

Proteins are key components for most chemical reactions in the body, serving as enzymes, thanks in part to the stunning variety of shapes, or conformations, these molecules can achieve. (Enzymes are proteins that facilitate and catalyze chemical reactions.) Unlike DNA, RNA can also shape-shift to an extent, and so can serve as an RNA-based enzyme, or ribozyme. RNA’s greater flexibility over DNA comes in part from the extra oxygen on RNA’s ribose sugar, which makes the molecule less stable, biologist Merlin Crossley wrote in The Conversation. The “deoxy” in deoxyribose references DNA’s 1-oxygen deficit.

According to some researchers, the most important RNA-based catalytic activity happens in the ribosome, where rRNA, a ribozyme, mediates amino acid addition to growing proteins. Other ribozymes include small nuclear RNAs (snRNAs), which splice mRNA into usable forms, and M1 RNA, one of the first known ribozymes, which similarly clips bacterial tRNA.

In the last three decades, the number of known RNA varieties has blossomed, He said, as researchers discovered a menagerie of RNAs that do something completely different: regulate genes. “There’s a whole set of RNAs that play critical regulatory roles,” influencing which genes get expressed and at what rates, He said.

“In recent years, few areas of biology have been transformed as thoroughly as RNA molecular biology,” in large part due to the discovery of small regulatory RNAs, researchers wrote in a 2017 review published in the International Journal of Biomedical Science. Most significant are short interfering RNAs (siRNAs), microRNAs (miRNAs), and piwi-interacting RNAs (piRNAs), the authors wrote.

Related: What is genetic modification?

Other regulatory RNA players include the heftier long noncoding RNAs (lncRNAs), which affect genes by associating with complexes of DNA and protein called chromatin, as described in a 2019 review in the journal Noncoding RNA. lncRNA can function to activate or inactivate sections of chromatin, which packages DNA into a compact form in the cell, so that genes in that chromatin get expressed or inhibited. Enhancer RNAs have the opposite effect to much of the above, increasing the expression of certain genes via not-yet-understood mechanisms, according to a 2020 review in the journal Frontiers in Cell and Developmental Biology.

Additional RNA types have popped up in other organisms. For instance, bacteria host analogues to miRNA and siRNA called small RNA regulators (sRNAs). Parts of the gene-editing CRISPR-Cas9 system found in bacteria and archaea also rely on RNA, which binds to the so-called CRISPR DNA sequences that identify invaders.

RNA’s versatility in function and form helped inspire the idea known as the “RNA world” hypothesis.

Organisms rely on an astoundingly complicated system of DNA, RNA and protein to transmit hereditary information, and scientists have long wondered how this system could have arisen in early life-forms. RNA offers a logical answer, He said: This molecule can both store genetic information and catalyze reactions, suggesting that early, simple organisms could have relied solely on RNA.

Additionally, He said, RNA’s sugar base, ribose, always appears first in organisms, as it’s easier to make. Deoxyribose then gets created from ribose. “So that implies in life, you have the ribose, the RNA first, and then the DNA comes later,” He said.

From that simpler RNA start, more-complex life could arise, evolving the stabler DNA to serve as a long-term library and developing protein as a more efficient catalyst.

Why RNA at all?

In the path from DNA to protein, RNA essentially serves as a middle-man, so why not eliminate the RNA go-between and move directly from DNA to protein? Simple life-forms, like DNA viruses, do just that, He said. Similarly, some of the most infamous viruses — HIV, the common cold virus, influenza and COVID-19 — stash all their genetic info in RNA, with no DNA predecessor.

More-complicated organisms need to do a lot more genetic regulation, however, He said. So, most of their genomes don’t code for proteins but code for parts of the genome that regulate other sequences. Promoters, for instance, can turn genes on or off. He said “you don’t want to convert [the human genome’s] 3 billion base pairs into protein sequence.” Expending cellular resources on so many sequences that don’t code for needed human proteins “would be a huge waste,” he said. RNA makes it possible to transcribe just the protein-coding bits of the genetic sequence into the mRNA intermediary.

Related: Genetics: The study of heredity

Additionally, mRNA provides a handy method of fine-tuning a gene’s output. “RNA … is the DNA photocopy,” said the RNA Society, a nonprofit that facilitates sharing of RNA research. “When the cell needs to produce a certain protein, it … produces multiple copies of that piece of DNA in the form of messenger RNA … Thus, RNA expands the quantity of a given protein that can be made at one time.”

RNA’s amplification ability is, once again, due to the molecule’s flexibility. Because RNA can fold into various shapes, it can churn out the mRNA and tRNA conformations needed to run that photocopier. DNA can’t do that.

Not only does RNA store the genetic info for many viruses, but it could also help scientists combat those same invaders. Proposed RNA-based vaccines would use injected mRNA to tell a person’s body to make antigens, the substances that trigger immune responses, biologist Alexis Hubaud wrote for Harvard University’s graduate school blog. “That’s one of the most popular ways for developing anti-COVID-19 vaccines these days,” He told Live Science. COVID-19 vaccine candidates such as those made by Moderna and Pfizer utilize this approach.

Related: What is a coronavirus?

Other potential RNA therapeutic applications could use injected mRNA to tell the body to make a functioning protein in a patient who lacks the genes to encode that protein, such as in people with hemophilia. “Several years ago, people would say this is crazy — if you have a defect, I’m just going to give you a healthy messenger RNA,” He said. But it’s now one of the most exciting areas of research, he added.

A June 2020 breakthrough also has RNA researchers excited, The Scientist reported. It showed that eliminating an RNA-binding protein could turn other cells into neurons, with major implications for diseases like Alzheimer’s, He said.

“That’s also exciting because fundamentally it indicates RNA can have dramatic effects on cell fate,” He said.