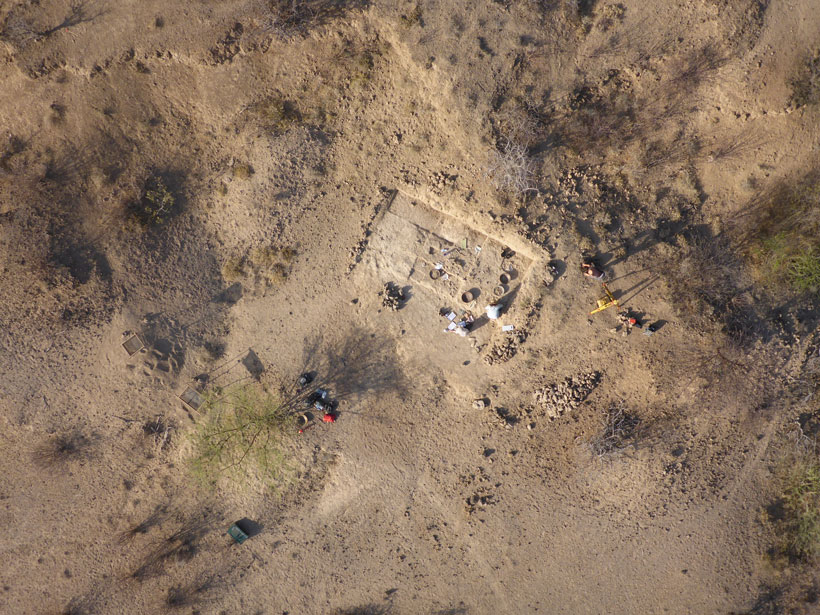 Somewhere on the winding and much-forked road of human evolution, our ancestors began making fires and never looked back.

Fire’s appeal wasn’t just about aesthetics, comfort, or even safety: Circumstantial evidence suggests that archaic humans’ ability to cook food and consume more calories may have played a pivotal role in the development of much bigger brains as far back as Homo erectus more than a million years ago. But hard evidence for when exactly our ancestors fully wielded control of flames has proved elusive. A novel application of a trusty geochemical technique may help answer burning questions about when and where our ancestors made friends with fire.

The Turkana Basin in eastern Africa is one of the world’s hotbeds for studying early human evolution, said Kevin Uno, a paleoecologist at the Lamont-Doherty Earth Observatory at Columbia University in Palisades, N.Y., and lead investigator of the study, presented at AGU’s Fall Meeting 2020 in a special session on paleofire. The well-studied Turkana Basin stretches across parts of Ethiopia, Kenya, South Sudan, and Uganda and includes desert, scrubland, and grassland ecosystems.

“We know that fire played an important role in the evolution of humans, but when and how our relationship with fire developed is a long-standing question.”

Since the 1980s, archaeologists have painstakingly excavated many sites in the basin where stratigraphy shows early humans lived for thousands of years. As they sifted through soil layers, the teams often encountered sections of red and orange sediments, where fires had burned the ground. Some of these sites date back 1.9 million years, making Turkana the site of one of the earliest known associations between hominins and fire.

“The possibility that our ancestors, probably Homo erectus, used fire here on a regular basis is quite tantalizing,” Uno said. “We know that fire played an important role in the evolution of humans, but when and how our relationship with fire developed is a long-standing question.”

To help explore that question, Uno and colleagues turned to a class of polycyclic aromatic hydrocarbons (PAHs), a type of aromatic hydrocarbon that is produced when oil, gas, or wood is burned. PAHs can be petrogenic, the result of burning fossil fuels, or pyrogenic, the result of burning biomass such as wood. “Characterizing PAHs is a technique widely used in environmental geochemistry,” Uno said. “But it has never been used to study an archaeological site this old.”

The study documented pyrogenic PAHs at the Turkana site, but part of the challenge in pinpointing control of fire lies in demonstrating that the burned sediments were generated by human-set fires and not landscape fires that are common in grassland environments. “We needed to determine whether people were making and controlling fires or if they were just taking advantage of natural landscape fires,” said Sarah Hlubik, a paleoanthropologist at Rutgers University in New Brunswick, N.J., and a lead investigator on the Turkana Basin dig. “By applying geochemical techniques over a large region, we can create a picture of how human behavior fit into the regional scale of climate variation and natural fire cycles.”

The team’s preliminary findings show elevated PAH concentrations around archaeological sites, whereas soil samples from nearby locations that show no signs of human habitation have lower PAHs—indicating that the fires were contained, not landscape-wide. “Unfortunately, field work has been delayed due to COVID-19, but our initial analysis of existing soil samples shows that the [PAH] technique works,” Uno said.

The next step in the team’s research will be to analyze a sediment core that spans a half million years of the basin’s history, with a focus on PAH patterns during the time period between 1.9 million and 1.3 million years ago.

“If we see major changes in fire regimes in the basin during that time span, it may indicate hominins were changing the fire dynamics of the basin,” Uno said. Changes at the landscape level may also indicate that hominins were at work. “The impact could go beyond roasting marshmallows and cooking elephant steaks over campfires; they may have been intentionally burning larger areas for landscape management, as many primitive cultures are known to do.”

Richard Wrangham, an anthropologist at Harvard University who was not involved in the new study, thinks that the use of fire to cook is a crucial point in human evolution, and the new study makes a contribution to the discourse. “I am convinced that the fact that humans cook food is an obligatory adaptation. We simply have to cook our food to consume enough calories.…We’re asking a lot from the archaeological record, trying to pinpoint this revolution. To my knowledge, this is the first study to examine carefully whether there is a stronger association of [PAHs] in areas where hominins were known to be.”

The Turkana Basin fits neatly into the timeline for the earliest human use of fire, Wrangham said. Skeletal changes evident in the fossil record—a shortened gut, smaller abdominal cavity, and larger brains—suggest that archaic humans became obligatorily connected to fire around 1.9 million years ago. “The period this team is investigating is the period in which I would expect to see close associations between human settlements and fire. Before then, between 2.5 [million] and 1.9 million years ago, our ancestors were likely playing with fire and using it intermittently.”

Wrangham would like to see the PAH technique applied to other sites with evidence of early fire use, such as the Nihewan Basin in China, where charcoal is found throughout human-occupied layers dating between 2 million and 1 million years ago. “I think this technique has tremendous potential for pinpointing when people started using fire,” he said, “and there are quite a few sites available during this key time period.”