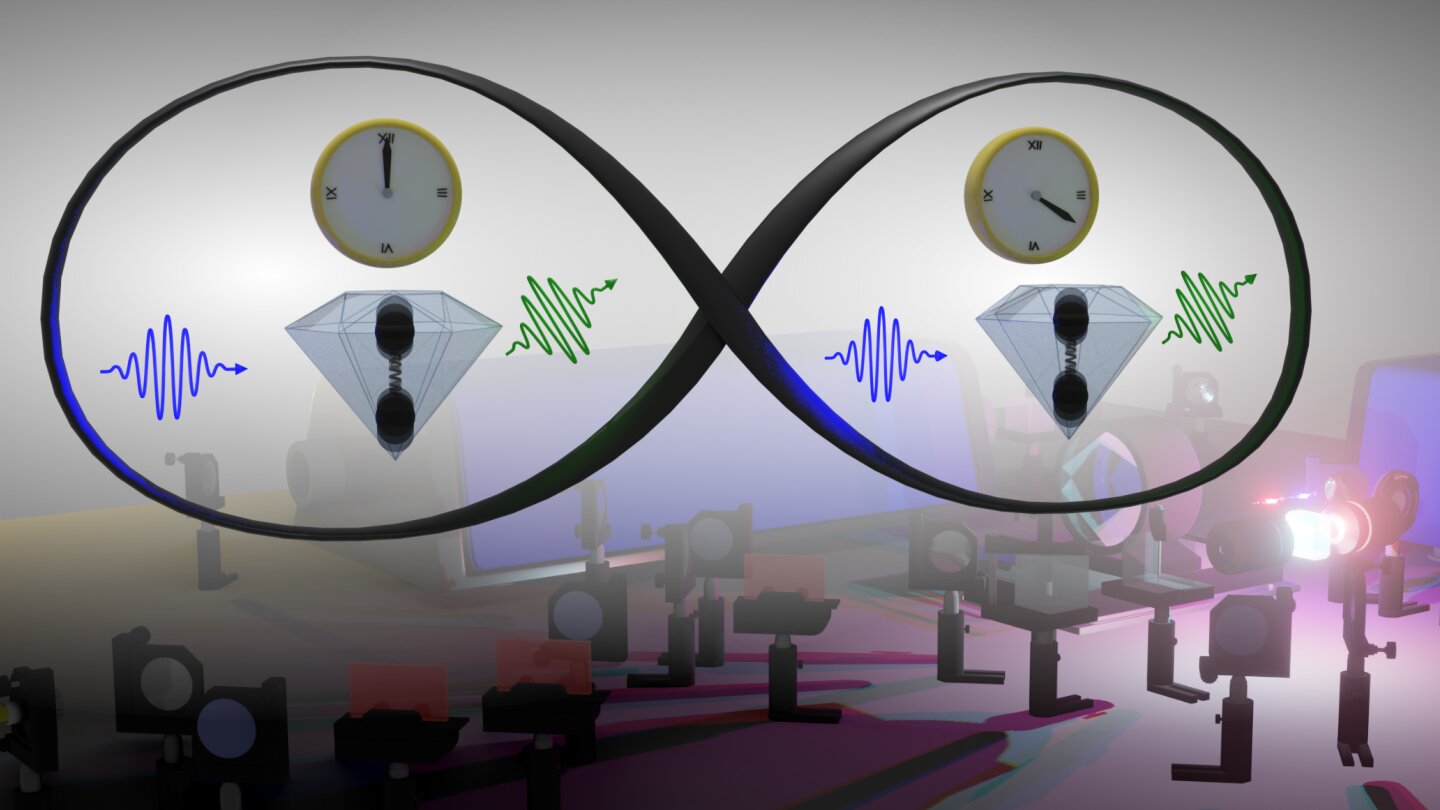 An especially counter-intuitive feature of quantum mechanics is that a single event can exist in a state of superposition—happening both here and there, or both today and tomorrow.

Such superpositions are hard to create, as they are destroyed if any kind of information about the place and time of the event leaks into the surrounding—and even if nobody actually records this information. But when superpositions do occur, they lead to observations that are very different from that of classical physics, raising questions that spill over into our very understanding of space and time.

Scientists from EPFL, MIT, and CEA Saclay, publishing in Science Advances, demonstrate a state of vibration that exists simultaneously at two different times, and provide evidence of this quantum superposition by measuring the strongest class of quantum correlations between light beams that interact with the vibration.

The researchers used a very short laser-pulse to trigger a specific pattern of vibration inside a diamond crystal. Each pair of neighboring atoms oscillated like two masses linked by a spring, and this oscillation was synchronous across the entire illuminated region. To conserve energy during this process, a light of a new color is emitted, shifted toward the red of the spectrum.

The process described above should therefore be seen as the fission of an incoming photon from the laser into a pair of photon and phonon—akin to nuclear fission of an atom into two smaller pieces.

But it is not the only shortcoming of classical physics. In quantum mechanics, particles can exist in a superposition state, like the famous Schrödinger cat being alive and dead at the same time.

Even more counterintuitive: two particles can become entangled, losing their individuality. The only information that can be collected about them concerns their common correlations. Because both particles are described by a common state (the wavefunction), these correlations are stronger than what is possible in classical physics. It can be demonstrated by performing appropriate measurements on the two particles. If the results violate a classical limit, one can be sure they were entangled.

In the new study, EPFL researchers managed to entangle the photon and the phonon (i.e., light and vibration) produced in the fission of an incoming laser photon inside the crystal. To do so, the scientists designed an experiment in which the photon-phonon pair could be created at two different instants. Classically, it would result in a situation where the pair is created at time t1 with 50% probability, or at a later time t2 with 50% probability.

But here comes the ‘trick’ played by the researchers to generate an entangled state. By a precise arrangement of the experiment, they ensured that not even the faintest trace of the light-vibration pair creation time (t1 vs. t2) was left in the universe. In other words, they erased information about t1 and t2. Quantum mechanics then predicts that the phonon-photon pair becomes entangled, and exists in a superposition of time t1 and t2. This prediction was beautifully confirmed by the measurements, which yielded results incompatible with the classical probabilistic theory.

By showing entanglement between light and vibration in a crystal that one could hold in their finger during the experiment, the new study creates a bridge between our daily experience and the fascinating realm of quantum mechanics.

“Quantum technologies are heralded as the next technological revolution in computing, communication, sensing, says Christophe Galland, head of the Laboratory for Quantum and Nano-Optics at EPFL and one of the study’s main authors. “They are currently being developed by top universities and large companies worldwide, but the challenge is daunting. Such technologies rely on very fragile quantum effects surviving only at extremely cold temperatures or under high vacuum. Our study demonstrates that even a common material at ambient conditions can sustain the delicate quantum properties required for quantum technologies. There is a price to pay, though: the quantum correlations sustained by atomic vibrations in the crystal are lost after only 4 picoseconds—i.e., 0.000000000004 of a second! This short time scale is, however, also an opportunity for developing ultrafast quantum technologies. But much research lies ahead to transform our experiment into a useful device—a job for future quantum engineers.”

Detecting the birth and death of a phonon