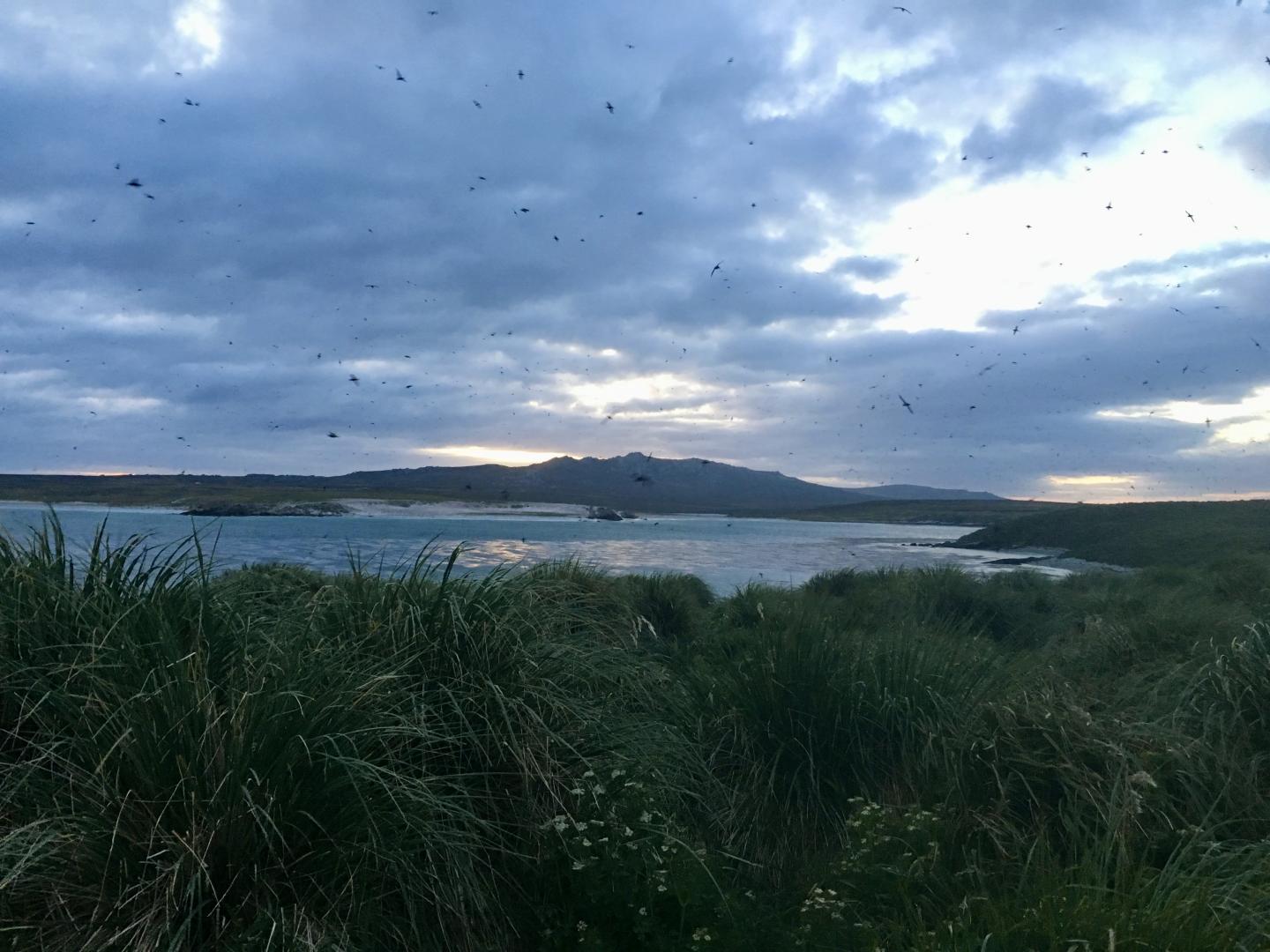 Seabirds arrived on the remote cluster of islands in the South Atlantic known as the Falkland Islands 5,000 years ago. Their arrival occurred at the same time as the region cooled.

Probably not, according to experts like Dulcinea Groff, whose research interests include paleoecology, paleoclimate, conservation and environmental change. Instead, their arrival suggests that the Falkland Islands were a cold-climate refuge for seabirds. Today, a warming Southern Ocean calls into question the long-term viability of the Falkland Islands as a habitat for seabirds whom Groff calls the “canaries in the coalmine of the ocean and land where they nest” because of their sensitivity to climate change.

Groff and her colleagues set out to discover how seabirds responded to climate change thousands of years ago because the past provides a window into how seabirds might respond to a changing climate in the future. The team’s examination of a 14,000-year record, derived from peat?a natural archive of information about past environments?reveals that an ecosystem shift occurred following seabird establishment 5,000 years ago, as marine-derived nutrients from guano (accumulated bird excrement) facilitated the establishment of tussac (a type of grass), peat productivity, and increased fire. The results of the study have been published today in Science Advances in an article ( https://advances.sciencemag.org/lookup/doi/10.1126/sciadv.abb2788) called, “Seabird establishment during regional cooling drove a terrestrial ecosystem shift 5000 years ago.” (DOI: 10.1126/sciadv.abb2788)

“Our 14,000-year record raises a very troubling question about where seabirds will go as the climate continues to warm because the seabirds at Surf Bay established when the climate was cooler,” says Groff, who is currently a Research Fellow in Lehigh’s Department of Earth and Environmental Sciences. (https://ees.cas.lehigh.edu/) This work was part of her dissertation (https://digitalcommons.library.umaine.edu/etd/2929/) at the University of Maine. “A couple centuries of introduced livestock grazing has severely damaged tussac grasslands, which are critical wildlife habitat. We learned just how important the nutrients in seabird poop are for the ongoing efforts to restore and conserve their grassland habitat.”

Scientists are able to learn about the past by analyzing peat because it preserves the remains of plants and animals as it accumulates or builds up over thousands of years. Groff and her colleagues examined pollen made by the plants, charcoal left over from grassland fires, and chemical indicators associated with seabirds being present, all derived from peat samples. The peat profile allowed them to determine the order of events with the seabirds and their breeding habitat: the tussac grasslands.

“Our study is unique because it documents a direct linkage across ocean and land ecosystems between top predators of the oceans -the seabirds- and island plant communities,” says Groff. “The abrupt ecosystem shift happened within a matter of a few decades and suggests that as the climate continues to warm, it’s critical to think about where seabirds will go in the future and plan to protect those places. This is also relevant toward efforts to restore the tussac grasslands because as the climate warms, seabirds may find and occupy more suitable environments elsewhere, and we should expect that the coastal grasslands will respond to the loss in nutrients from seabird guano.”

This work was funded in part by the NSF IGERT program called ‘Adaptation to Abrupt Climate Change’, student research grants from the LacCore Visiting Student Research Grant, Geologic Society of America Student Research Grant, the Dan and Betty Churchill Fund, University of Maine Graduate Student Government, and over 180 donors to the team’s crowdfunding initiative (https://experiment.com/projects/penguins-plants-and-people-getting-to-the-core-of-climate-change-in-the-falkland-islands) from 2014.