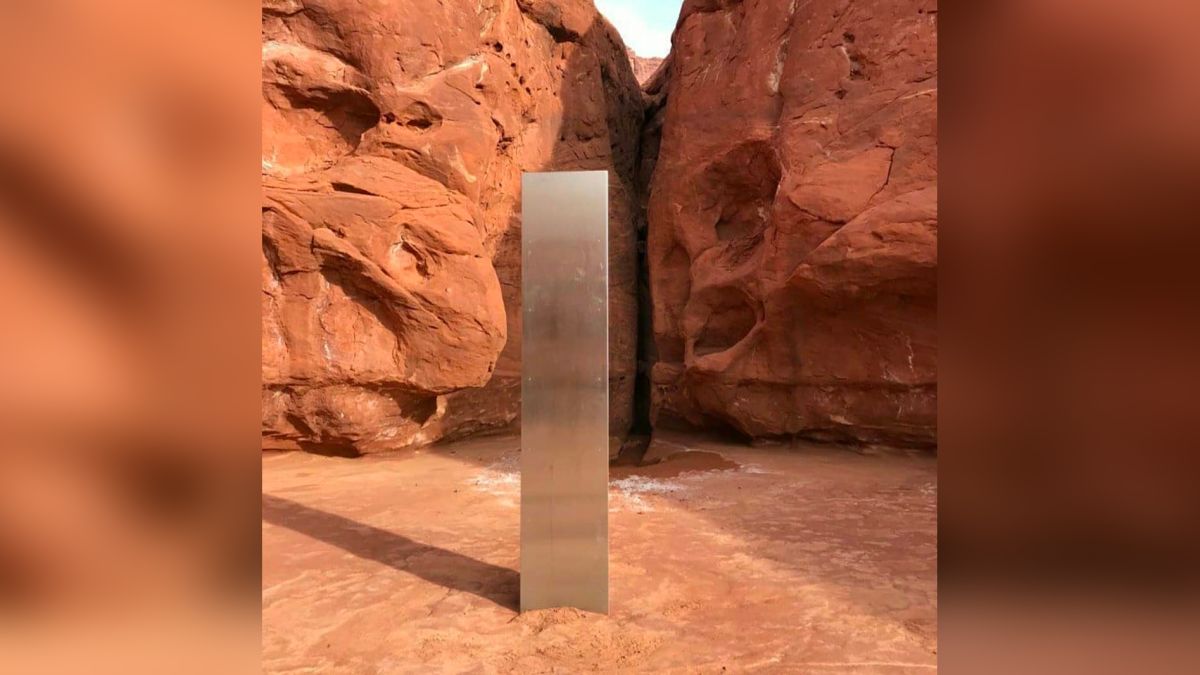 Who embedded a large metal monolith in the remote Utah desert?

State wildlife officials are scratching their heads after discovering a bizarre 10-foot-tall (3 meters) installation in Red Rock Country in southeastern Utah. The shiny silver rectangle sits in the center of the dead end of one of the many shallow rock ravines that scour this desert region. Its discovery had wildlife officials feeling as if they’d been dropped into an episode of “Ancient Aliens.”

“OK, the intrepid explorers go down to investigate the, uh, alien life-form,” one chuckles as he takes a video of his companions hiking to the monolith on Nov. 18.

The monolith failed to immediately do anything mystical, though officials noted with surprise that someone had taken the trouble to cut into the hard-packed earth to install the monument. There was no indication of who had left the monolith, according to the Utah Department of Public Safety.

A biologist from the Utah Department of Public Safety Aero Bureau was the first to spot the weird structure. A small team from the bureau was flying over the red desert doing a count of bighorn sheep when he noticed something shiny.

The team landed nearby and went to investigate, speculating wildly and joking that if anyone disappeared, the rest of them would have to make a run for it. A closer investigation revealed nothing but a metal rectangle between 10 and 12 feet (3 to 3.6 m) tall.

“I’m assuming it’s some new wave artist or something or, you know, somebody that was a big (2001: A Space Odyssey) fan,” Hutchings told KSL TV.

The monolith in 2001: A Space Odyssey is a mysterious rectangle that seems to trigger rapid evolutionary or societal leaps in human history. It must be said, however, that the monoliths in the Arthur C. Clarke novels that inspired the movie always have dimensions in a ratio of 1:4:9, which doesn’t appear true for the Utah monolith (its width and depth appear to be the same length). And the movie monolith is dark-colored and non-reflective. If someone was inspired by “2001: A Space Odyssey” to plant the monument, they did so with minimal attention to detail.

“That’s been about the strangest thing that I’ve come across out there in all my years of flying,” Hutchings said.

The Department of Public Safety is keeping the location of the monument confidential, out of concern that people going to look for it might get stranded in the remote location and need rescuing. There’s no stopping the internet though; several Reddit threads devoted to the monument claim to have narrowed down a search location already. The entire region is remote and has very few roads, raising questions about how whoever installed the monument got it into the canyon. In photographs posted by the Department of Public Safety, the monolith appears to be made of metal sheeting held together by screws, suggesting it might be fairly lightweight.

According to the Department of Public Safety, the Bureau of Land Management will determine if any further investigation is needed.

Desert environments have always attracted outsider artists, such as Frank Van Zant, who built a hostel and home out of scrap materials in the desert in Nevada, or Leonard Knight, whose “Salvation Mountain” southeast of Los Angeles was featured in the movie “Into the Wild.” But the federal government looks poorly on projects done without permission.

“It is illegal to install structures or art without authorization on federally managed public lands, no matter what planet you’re from,” DPS noted on its website.