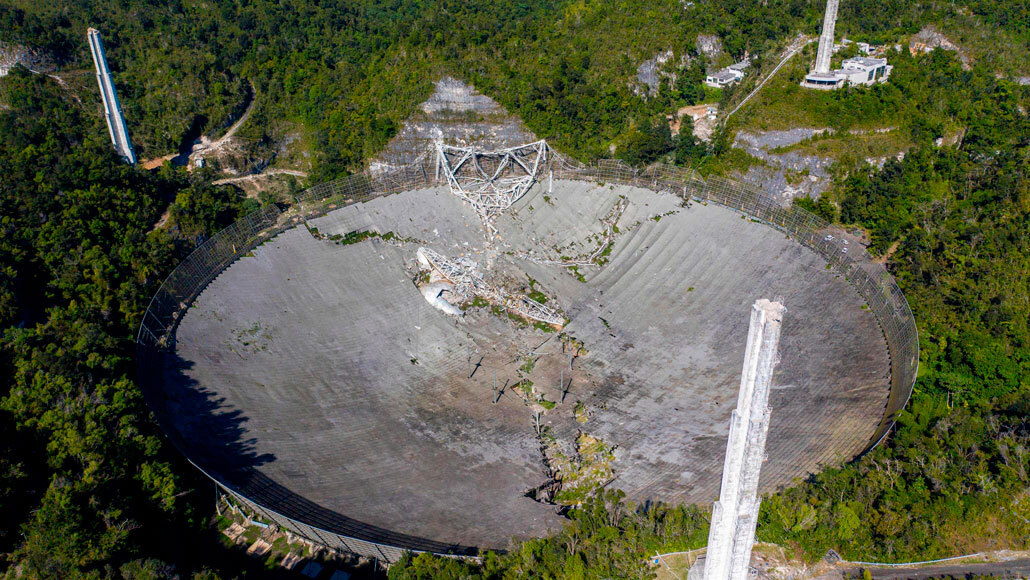 “I definitely remember this feeling of just being awestruck,” Rivera-Valentín says. “Looking at this gigantic telescope … getting to hear about all this neat work that was being done … it definitely leaves an impression.” Important science was happening right in the backyard of Rivera-Valentín’s hometown of Arecibo, Puerto Rico — and someday, Rivera-Valentín wanted to be a part of it.

As an adult, Rivera-Valentín returned to the observatory to work as a planetary scientist, using Arecibo to map the shapes and motions of potentially dangerous near-Earth asteroids. Now at the Lunar and Planetary Institute in Houston, Rivera-Valentín continues to use Arecibo data to study planetary surfaces. So the recent news that the Arecibo Observatory would shut down was “heartbreaking.”

In August and November, two cables supporting a 900-metric-ton platform of scientific instruments above Arecibo’s dish unexpectedly broke. After assessing the damage, the National Science Foundation, which funds Arecibo, announced that the telescope could not be safely repaired and would be torn down (SN: 11/19/20). But before the telescope could be dismantled, the entire instrument platform crashed down into the dish on December 1.

For Puerto Rico, losing Arecibo is like New York losing the Empire State Building, or San Francisco losing the Golden Gate Bridge, Rivera-Valentín says — but with the added tragedy that Arecibo was not just a cultural and historic icon, but a prolific research facility.

“The loss of Arecibo is a big loss for the community,” says Tony Beasley, director of the National Radio Astronomy Observatory in Charlottesville, Va. “The life cycle of Arecibo was really quite remarkable, and it did some amazing science.”

The observatory’s radar maps of the moon and Mars, for example, helped NASA pick landing sites for the Apollo (SN: 5/1/65) and Viking missions (SN: 7/17/76). And observations of the asteroid Bennu helped NASA plan its OSIRIS-REx mission to snag a sample from the space rock (SN: 10/21/20). Arecibo views of Saturn’s moon Titan have revealed hydrocarbon lakes on its surface (SN: 10/1/03).

Beyond the solar system, Arecibo has observed mysterious flashes of radio waves from deep space, called fast radio bursts (SN: 2/7/20), and the distribution of galaxies in the universe. Arecibo has also been used for decades in the search for extraterrestrial intelligence (SN: 11/7/92), and it beamed the first radio message to aliens into space in 1974 (SN: 11/23/74).

In the wake of Arecibo’s collapse, the radio astronomy community is “going to have to look at what was going on at Arecibo and figure out how to replace as best we can some of those capabilities with other instruments,” Beasley says.

But many of Arecibo’s capabilities can’t be easily replaced.

“Arecibo was unique in several ways,” says Donald Campbell, an astronomer at Cornell University and a former director of the observatory. For starters, Arecibo was enormous. At 305 meters across — covering some 20 acres — Arecibo was the world’s largest radio dish from the time it was built in 1963 (SN: 11/23/63) until 2016, when China completed its Five-Hundred-Meter Aperture Spherical Telescope, or FAST. With such a huge dish to collect radio waves, Arecibo could see very faint objects and phenomena.

That incredible sensitivity made Arecibo particularly good at detecting hard-to-spot objects such as rapidly spinning neutron stars called pulsars (SN: 1/3/20). As a pulsar rotates, it sweeps a beam of radio waves around in space like a lighthouse, which appears to Earth as a radio beacon flickering on and off.

“Arecibo was the king” of spotting the fickle light of pulsars, Beasley says. “There’s not going to be a simple solution to regenerating that level of collecting area.” The next biggest radio dish in the United States is the 100-meter-wide Green Bank Telescope in West Virginia. Smaller telescopes may require several hours of observing a target to collect enough radio waves for analysis, whereas Arecibo took only minutes.

Besides its mammoth size, Arecibo could also transmit radio waves. “Most radio astronomy telescopes do not have transmitters,” Campbell says. “They’re just receiving radio waves from space.” Radar transmitters allowed Arecibo to bounce radio waves off of gases in the atmosphere (SN: 1/31/70), or the surfaces of asteroids and planets. The reflected signals that came back contained information about the target such as size, shape and motion.

“The high-powered transmitters allowed what was the original primary purpose of the telescope — the study of the Earth’s ionosphere,” Campbell says. The U.S. military, which funded the construction of Arecibo, wanted to better understand Earth’s atmosphere to help develop missile defenses (SN: 2/10/68). But Arecibo’s radar transmitters “were also used to study solar system bodies — the planets, the moons, including our own moon,” Campbell says. “More recently, the emphasis has been on studying near-Earth asteroids” that could be on a collision course with Earth.

Other big radio dishes, such as China’s FAST or the Green Bank Telescope, are not outfitted with radar transmitters. NASA’s Goldstone Deep Space Communications Complex in the Mojave Desert has a 70-meter dish with radar capabilities. But Goldstone “is used both as a military installation and also as part of the Deep Space Network that talks to spacecraft, so it doesn’t have a lot of time,” Rivera-Valentín says. “And it’s not as sensitive as Arecibo,” so it can’t see as many asteroids.

Even at the time of its demise, the Arecibo Observatory still had “a bright scientific future,” says Joan Schmelz, an astronomer at the Universities Space Research Association in Mountain View, Calif., and a former deputy director of the observatory. “It wasn’t just resting on its laurels.” For instance, Arecibo was a key facility for the ongoing NANOGrav project, which uses observations of pulsars to search for ripples in spacetime kicked up by supermassive black holes (SN: 9/24/15).

Arecibo’s observing days may be over, but that doesn’t mean data from the telescope won’t make any more contributions to science, Schmelz says. Some of radio astronomy’s most exciting discoveries have emerged from the reanalysis of old telescope data (SN: 7/25/14). “People will be continuing to analyze Arecibo data for some time,” she says, “and we’ll hopefully be seeing new scientific results as those data get analyzed and published.”