Why the diabolical ironclad beetle is nearly impossible to squish 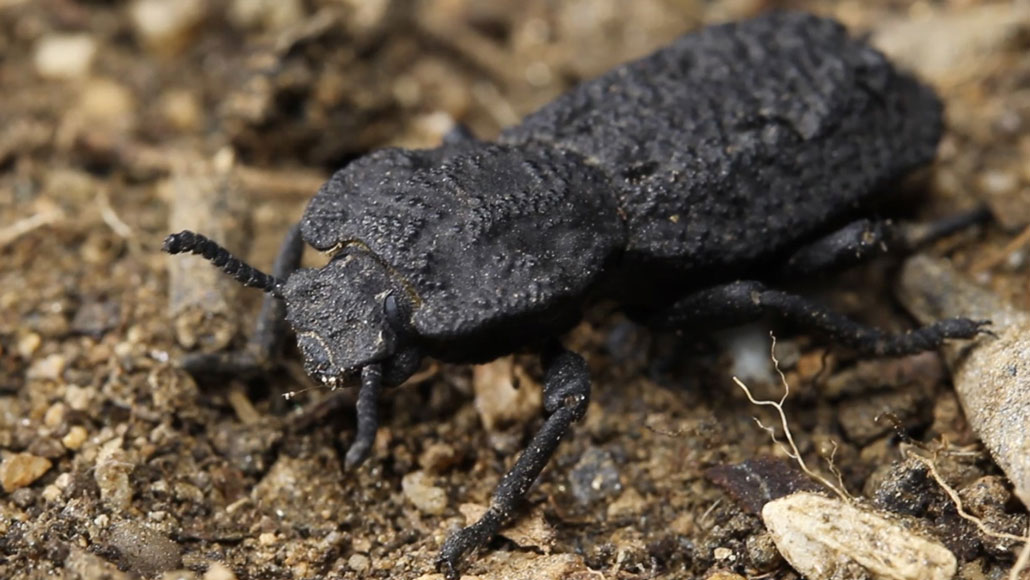 The diabolical ironclad beetle is like a tiny tank on six legs.

This insect’s rugged exoskeleton is so tough that the beetle can survive getting run over by cars, and many would-be predators don’t stand a chance of cracking one open. Phloeodes diabolicus is basically nature’s jawbreaker.

Analyses of microscope images, 3-D printed models and computer simulations of the beetle’s armor have now revealed the secrets to its strength. Tightly interlocked and impact-absorbing structures that connect pieces of the beetle’s exoskeleton help it survive enormous crushing forces, researchers report in the Oct. 22 Nature. Those features could inspire new, sturdier designs for things such as body armor, buildings, bridges and vehicles.

The diabolical ironclad beetle, which dwells in desert regions of western North America, has a distinctly hard-to-squish shape. “Unlike a stink beetle, or a Namibian beetle, which is more rounded … it’s low to the ground [and] it’s flat on top,” says David Kisailus, a materials scientist at the University of California, Irvine. In compression experiments, Kisailus and colleagues found that the beetle could withstand around 39,000 times its own body weight. That would be like a person shouldering a stack of about 40 M1 Abrams battle tanks.

Within the diabolical ironclad beetle’s own tanklike physique, two key microscopic features help it withstand crushing forces. The first is a series of connections between the top and bottom halves of the exoskeleton. “You can imagine the beetle’s exoskeleton almost like two halves of a clamshell sitting on top of each other,” Kisailus says. Ridges along the outer edges of the top and bottom latch together.

But those ridged connections have different shapes across the beetle’s body. Near the front of the beetle, around its vital organs, the ridges are highly interconnected — almost like zipper teeth. Those connections are stiff and resist bending under pressure.

The connective ridges near the back of the beetle, on the other hand, are not as intricately interlocked, allowing the top and bottom halves of the exoskeleton to slide past each other slightly. That flexibility helps the beetle absorb compression in a region of its body that is safer to squish.

The second key feature is a rigid joint, or suture, that runs the length of the beetle’s back and connects its left and right sides. A series of protrusions, called blades, fit together like jigsaw puzzle pieces to join the two sides. These blades contain layers of tissue glued together by proteins, and are highly damage-resistant. When the beetle is squashed, tiny cracks form in the protein glue between the layers of each blade. Those small, healable fractures allow the blades to absorb impacts without completely snapping, explains Jesus Rivera, an engineer at UC Irvine.

This toughness makes the diabolical ironclad beetle pretty predator-proof. An animal might be able to make a meal out of the beetle by swallowing it whole, Kisailus says. “But the way it’s built, in terms of other predation — let’s say like a bird that’s pecking at it, or a lizard that’s trying to chew on it — the exoskeleton would be really hard” to crack.

That hard exterior is also a nuisance for insect collectors. The diabolical ironclad beetle is notorious among entomologists for being so fantastically durable that it bends the steel pins usually used to mount insects for display, says entomologist Michael Caterino of Clemson University in South Carolina. But “the basic biology of this thing is not particularly well-known,” he says. “I found it fascinating” to learn what makes the beetle so indestructible.

The possibility of using beetle-inspired designs for sturdier airplanes and other structures is intriguing, Caterino adds. And with the splendid variety of insects all over the world, who knows what other critters might someday inspire clever engineering designs.