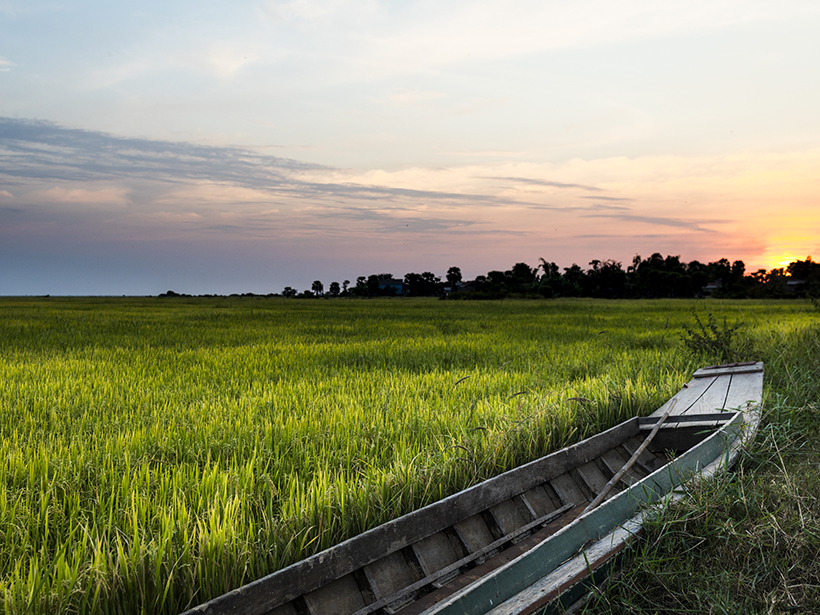 Rice feeds about half the world, but it is vulnerable to rising temperatures. Increased heat boosts the arsenic uptake from soil to rice plants, perhaps to toxic levels for infants. A new analysis presented at AGU’s virtual Fall Meeting 2020 revealed the root cause of this potentially poisonous transfer, providing another clue for field scientists working to address the problem.

“We found strong evidence that what’s really controlling this process is a microbially mediated reaction that takes arsenic out of the soil and [puts it] into the water,” said Yasmine Farhat, a doctoral candidate in environmental engineering at the University of Washington and lead author of the study, which appeared in Science of the Total Environment in October.

Getting to the Root of the Problem

Rice is particularly vulnerable to arsenic uptake because unlike most crops, it grows in flooded conditions with anoxic soil. Microbes that thrive in these anoxic environments release arsenic into the soil’s pore water through normal metabolic reactions. Once liberated from soil particles, this pore water arsenic can be taken up by the rice plant’s roots.

Previous studies have focused mainly on heat stress and its impact on how rice plants grow, possibly making them more likely to concentrate arsenic. What the new research indicates, however, is that “bioavailability may be more important,” Farhat said.

“Elevated growing temperatures may increase the risk of dietary arsenic exposure in rice systems that were previously considered low risk.”

Farhat’s team grew rice plants in four greenhouses set to daytime temperatures of 25.4°C, 27.9°C, 30.5°C, and 32.9°C. (Nighttime temperatures were about 2°C cooler.) Each chamber contained pots with soil from a rice field in Davis, Calif., with relatively low levels of arsenic. The team then sampled plant tissue, soil, and pore water as the plants grew.

Results showed a strong link between rice grain arsenic concentrations and temperature and confirmed that in hotter conditions, soil pore water contained more arsenic. Farhat’s team used a mass balance calculation to show that this increased bioavailability of arsenic was the main driver of higher arsenic levels in the plants.

The fact that her team used soil low in arsenic is crucial, Farhat said: “Elevated growing temperatures may increase the risk of dietary arsenic exposure in rice systems that were previously considered low risk.”

The authors suggested that real-world solutions to curtail high arsenic levels in rice should focus on restricting availability of the toxin. One approach is to let soils dry out intermittently, a method known as wetting and drying.

“If you give the soils time to breathe, or become oxygenated, it is known to reduce arsenic quite a bit,” said Manoj Menon, a soil and environmental scientist at the University of Sheffield in the United Kingdom who was not involved in the study. Another potential solution, Menon said, is planting arsenic-resistant varieties of rice.

In locations where arsenic availability mitigation is not feasible, cooking treatments could help. In a recent paper on which he was the lead author, Menon demonstrated a cooking method called “parboiling and adsorption,” which removed 54% of inorganic arsenic from brown rice and 73% from white rice.

In many areas across the globe, especially the tropics, people consume rice multiple times a day. For some, alternative food staples are simply not available. A rising concentration of arsenic in rice poses a slow moving but dire threat to these communities.

“It’s a big problem in South and Southeast Asia—anywhere where they irrigate with groundwater,” said Farhat, who has done extensive fieldwork in Cambodia.

According to Menon, no single solution will solve the problem of arsenic in rice. “Although this is common across Asia, there are regional differences,” he noted. The most critical step now, he said, is for researchers to bridge the gap between their work in the lab and agricultural practices in the field: “We have to educate people, at the community level.”