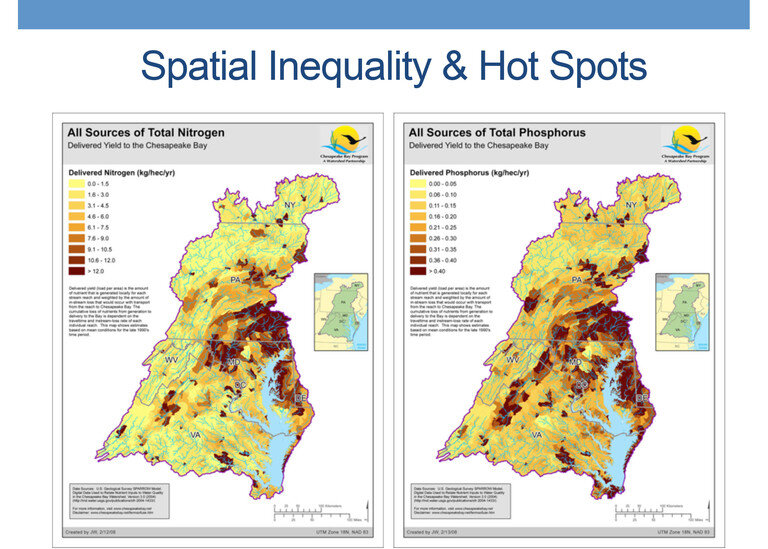 The vast majority of nutrients and sediment washed into streams flowing into the Chesapeake Bay are picked up by deluges from severe storms that occur on relatively few days of the year. That is the conclusion of a new study led by Penn State researchers, who say it offers clues for cleaning up the impaired estuary.

Researchers analyzed eight years of data from 108 sites in the Chesapeake Bay Program’s nontidal monitoring network. They looked at daily-scale records of flow and corresponding loads of total nitrogen, total phosphorus and total suspended sediment at each gauging station from 2010 through 2018. Then, in an innovative move, they applied a formula normally used in economics to the data to determine the distribution of pollution loads throughout the years.

“Using Lorenz Inequality and the Gini Coefficient, both of which first were used in the early 1900s to quantify inequity in wealth distribution, we were able to measure the degree of inequality of nutrient and sediment loads across the study years,” said Preisendanz. “This approach allowed us to identify periods of time and corresponding flow conditions that must be targeted to achieve needed load-reduction goals across the watershed.”

Recently published in Environmental Research Letters, the study’s conclusions make a strong case for watershed planners and managers to use a temporal framework to develop low- and high-flow targets for nitrogen, phosphorus and sediment loads specific to each watershed within the bay’s 64,000-square-mile basin. The seven states in the Chesapeake’s watershed have been federally mandated since 2010 to continually reduce nutrient and sediment loads reaching the bay.

The study portends a change for the bay, Preisendanz contends, because until now, processes for determining how to reduce total annual pollution loads at a watershed scale have targeted spatial, but not temporal, components of inequality—hot spots but not hot moments.

“I think this offers some insight as to why we haven’t met goals for restoring the bay’s water quality,” she said. “There’s been a lot of frustration around how much time and money has been spent and the number of best-management practices that have been adopted. We’re still significantly behind where we need to be—especially in Pennsylvania.”

Preisendanz also suggested the research may inject a badly needed dose of pragmatism into the debate about if and how the Chesapeake can be cleaned up, using best-management practices such as streamside buffers that function properly, streamside fencing, nutrient management plans for farms, continuous no-till crop cultivation and cover crops.

“Now that we know the dynamics of nutrient and sediment transport across the bay watershed, we may need to think differently about how we approach our goals,” she said. “If the reality is that we can’t deal with the highest flows from severe storms—which, by the way, are becoming more intense due to climate change—then we need to design a system that is more efficient at achieving load-reduction goals during low flows.”

One of the team’s hopes is that because its analysis was based on an approach that is easily understandable to a broad audience—using the analogy of temporal inequality to income inequality—the temporal targeting framework will be widely adopted by regulators, Preisendanz explained. People understand that inequality is ubiquitous not only in human-impacted systems, but also in natural systems, she pointed out.

“I like to ask people how unequally the number of strawberries produced in their garden was spread across their strawberry plants, because everyone has a super-productive and super-unproductive plant,” she said “That analogy is exactly transferable to understanding hot spots and hot moments, and why it is so important to manage them both. The team embraces the notion that in every challenge, there lies an opportunity.”

These findings show what successfully reducing pollution loads in waterways feeding the bay would look like in the real world, Preisendanz noted. “Rather than an ‘everything, everywhere, all-the-time’ approach, focusing on hot spots and hot moments reduces the problem to finding ‘the right solutions in the right places that work at the right time’ approach.”