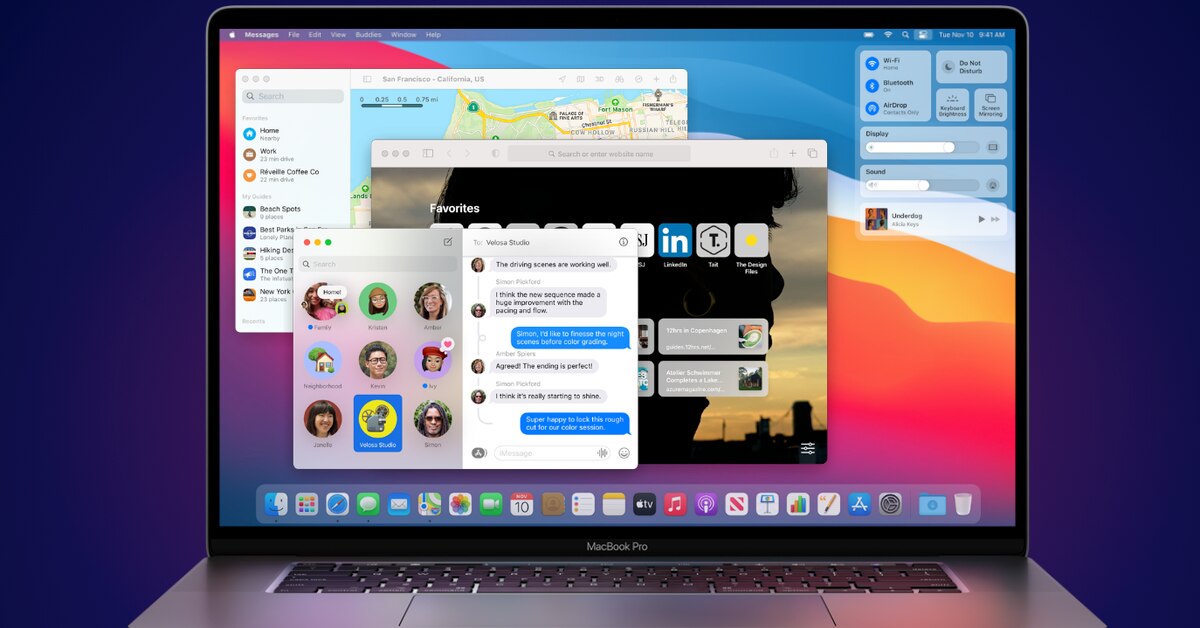 Your Mac gets a new look with the macOS Big Sur update. (Apple /)

If you’re using a Mac, it’s about to feel a lot more like an iPhone or iPad. Macs still don’t offer touchscreens, of course, but with the release of macOS Big Sur, the interface is going to seem a lot more like a mobile device.

The new software is built to support Apple’s first generation of Macs running on the company’s own system on a chip. Apple recently introduced the X1 chip that’s now powering the current generation MacBook Air, Mac mini, and the 13-inch version of the MacBook Pro. That puts Apple’s lineup firmly in a transition phase while its machines are split between its own silicon and lntel’s chips from the previous generations.

How to get the update

Not every Mac will be able to run Big Sur. If your computer is older than 2013, you’re totally out of luck. If you want to check your specific machine, you can visit this link. The download is about 12 GB worth of data, so make sure you don’t need your computer for a while before jumping into the upgrade. Also be sure to make a backup of your data before you start the process because you don’t want to lose all your stuff if installation goes poorly. There have been some scattered reports of the update totally bricking some machines, which seems very rare, but is worth knowing about before taking the leap.

After you’ve updated, you’ll notice a new icon in the upper right of your screen near the clock. Clicking it opens the Control Center interface, which should feel very familiar if you also use an iPhone or iPad. Control Center gives you access to simple controls for Wi-Fi, Bluetooth, and AirDrop as well as other commonly tweaked settings without having to dig into—or even open—the System Preferences interface.

Designers love rounded corners and now you can find them on all the windows in macOS Big Sur. It makes opening a new window feel a lot more like you’re using iPadOS. The icons in the dock also now have a uniform “squircle” shape like you’d find on an iPhone home screen.

Once you open a window, the sidebar spans the entire height from top to bottom rather than having a toolbar that runs all the way across. The whole refresh sits against a backdrop of more vibrant colors in the desktop photos, which closely mimics the iPad experience.

Widgets and notifications now live in one feed along the right side of the interface along with Widgets. Widgets aren’t new on the Mac, but they now more closely match those from iOS. Find the stream by clicking on the clock. The widgets and notifications allow you to perform some specific actions without having to delve into the apps themselves, so you can accept or decline a calendar invitation through a simple dropdown.

If you use Apple’s own browser, you’re about to get a whole suite of upgrades. You can now customize your start page with a curated set of favorites as well as a Privacy Report, which keeps tabs on the cross-site trackers Safari automatically blocks using its Intelligent Tracking Prevention.

Tabs have also gotten a redesign—you can fit more of them into the browser view at once and hovering over a tab will give you a small preview of what you can expect to see if you click over to it. Tab management was one of the big sticking points I had personally with Safari, and this seems like a worthy upgrade after some limited experience.

The App Store also now has a dedicated category for Safari extensions if you want to customize the browser’s overall experience.

On top of Safari’s front-end features, Apple also claims some drastic improvements on the backend, including a 50-percent boost in speed when loading frequently visited websites compared to Chrome. Apple also says it will provide 1.5 hours more streaming and one hour more browsing time on a battery charge when compared to Chrome or Firefox.

Exclusively on the new Macs

If you opt for a new Mac with the X1 chip inside, you’ll get some exclusive features out of Big Sur. The biggest upgrade comes from the ability to run some iPhone apps natively on your computer. You shouldn’t expect every iPhone app to show up immediately, but some like Darkroom have already started making the compatibility leap.

As Apple transitions more toward its own silicon across the entire range of Mac computers, I expect more and more upgrades specifically designed for those machines in future OS updates. For now, you’re not missing out on too much, but that could change just a few generations down the road.