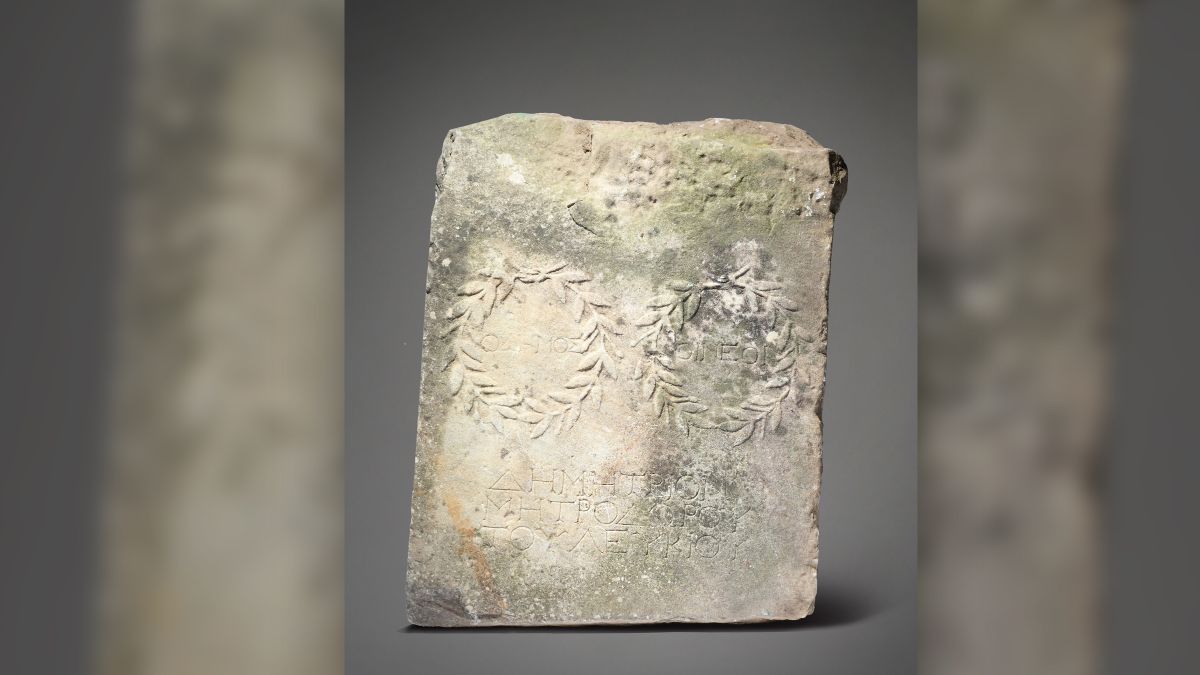 A seemingly dull marble slab, used for 10 years as a stepping stone in an English garden, is actually a rare ancient Roman engraving, a new analysis finds.

The discovery surprised its owner, who learned that the 25-inch-long (63 centimeters) slab — a stone she had previously used as a stair while mounting her horse — dated to the second century A.D. and was worth about $20,400 (£15,000).

However, no one knows how the marble masterpiece ended up in England. It was likely carved in Greece or Asia Minor (modern-day Turkey), according to a statement from Woolley and Wallis, a U.K auction house that is handling the sale of the slab.

Some of the stone’s history is known: It was unearthed from a rock garden in Whiteparish, a village in southern England, about 20 years ago, according to Woolley and Wallis. Then, the woman who owns the stable used the mud-covered stone for a decade as a mounting block until, one day, she noticed a laurel wreath carved on its surface. An archaeologist who assessed the slab revealed that it was a rare find. Its inscription reads, “the people (and) the Young Men (honor) Demetrios (son) of Metrodoros (the son) of Leukios,” The Daily Mail reported.

Although the ancient Roman Empire extended into the British Isles, this slab wasn’t made locally; it was likely brought to England about 300 years ago, according to Woolley and Wallis.

“Artifacts of this type often came into England as the result of Grand Tours in the late 18th and 19th century, when wealthy aristocrats would tour Europe, learning about classical art and culture,” Will Hobbs, an antiquities specialist at Woolley and Wallis, said in the statement. “We assume that is how it entered the U.K. But what is a complete mystery is how it ended up in a domestic garden, and that’s where we’d like the public’s help.”

The rock garden in Whiteparish is part of a house built in the mid-1960s, and the auctioneers are hoping that someone might recall details or people involved with its construction.

“There are several possibilities of where the stone might have originated,” Hobbs said. English country houses known as “Cowesfield House and Broxmore House were very close to Whiteparish and were demolished in 1949 after having been requisitioned by the [British] army during the war,” he said. “But we also know that the house at what is now [family theme park] Paultons Park was destroyed by fire in 1963, and so possibly rubble from there was reused at building sites in the area shortly afterwards.”

Previously, Woolley and Wallis planned to auction off the slab this February, but the auction house has since changed the time frame to spring.