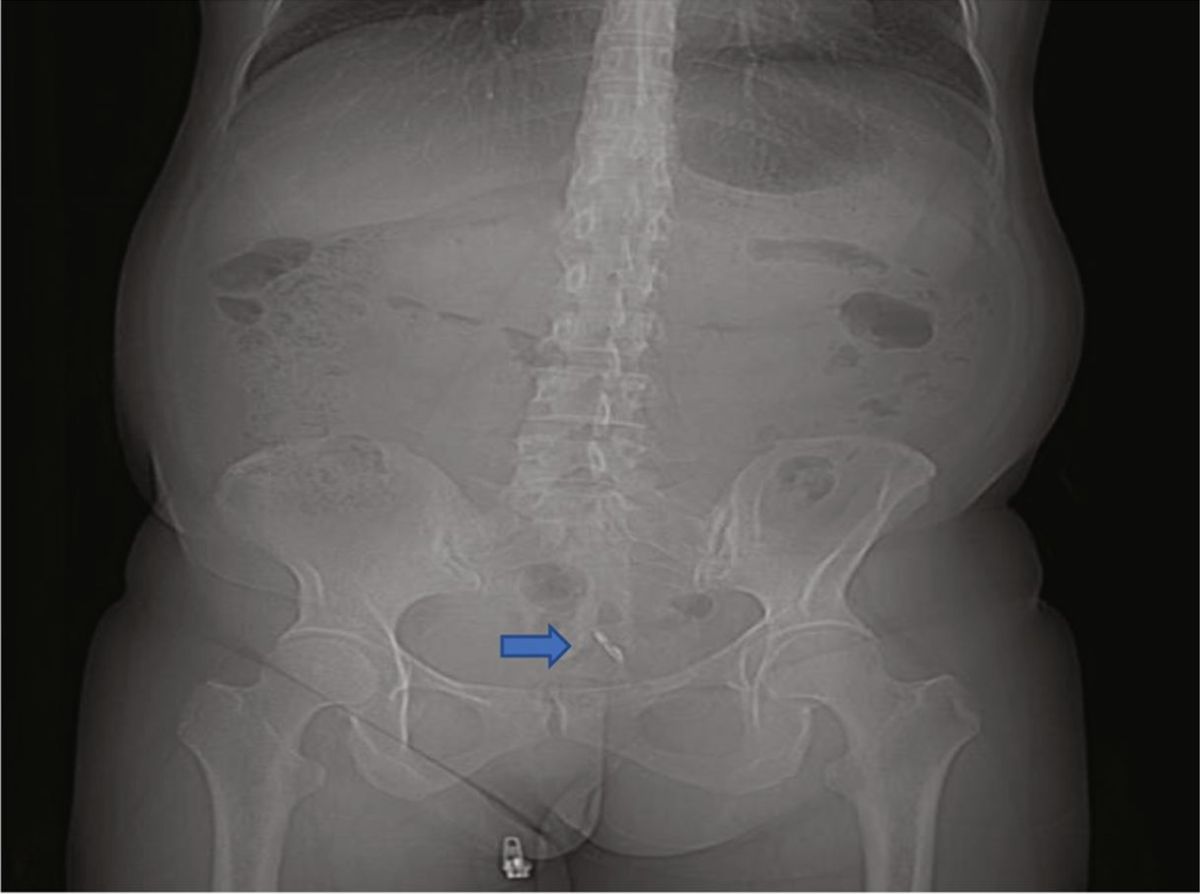 A 47-year-old woman who complained to her doctor of blood in her urine turned out to have an unusual diagnosis: Her copper intrauterine device (IUD), which she’d received a decade earlier, had perforated her bladder and a bladder stone had formed on it, according to a new report.

Doctors believe the IUD had gradually “eroded” through her uterus and into her bladder, a rare complication of the device, according to the report, published in the January issue of the journal Case Reports in Women’s Health.

“For doctors, this case shows that erosion of an IUD into the bladder, although rare, is possible and should be considered as a cause of urinary symptoms,” Dr. Nicholas Faure Walker, the urological surgeon at King’s College Hospital, London, who led the treatment team, told Live Science. “For the public, the main message would be that IUDs are safe in the vast majority of cases but a few do unfortunately cause significant complications.”

Related: Beyond birth control: 5 conditions ‘the pill’ can help treat

IUDs are effective forms of birth control that are inserted into the uterus and last up to 12 years, according to Planned Parenthood. They fall into two types: hormone-releasing IUDs and copper IUDs. Copper IUDs are wrapped in copper wire, which releases ions that prevent fertilization by impairing sperm swimming and making the uterus generally inhospitable to them. When doctors insert the IUD, which is typically T-shaped, there’s approximately a 1 in 1,000 risk that it will perforate the uterus, the authors note in their report.

Bladder perforation, however, is rare, according to Walker. “Only a small minority of these perforations involve the bladder,” he said. Though unusual, it has been previously reported in the medical literature.

For example, in 2017 something similar happened to a woman in China, Live Science previously reported. She had an IUD but nonetheless got pregnant, and when she gave birth, by C-section, the IUD was nowhere to be found in her uterus. It was only after years of bladder problems that doctors discovered the missing device in her bladder.

The subject of this new case report had had the copper IUD placed 10 years earlier when she had an abortion. Prior to that, she’d had two children delivered by C-section.

She went to the doctor with symptoms of blood in her urine, pain during urination, pain during sex, as well as pain in her left abdomen; these symptoms had lasted about two months, according to Walker. At King’s College Hospital, where she’d been referred, an ultrasound and CT scan revealed that the IUD had perforated the bladder. There, a bladder stone measuring 0.43-inches (1.1 centimeters), about the size of a pea, had formed on the device’s right arm.

According to the paper, there are two theories about how IUDs perforate the uterus: Either it punctures the uterine wall when it’s being inserted or it gradually wears away the uterine tissue in a process called erosion. “We believe that the IUD eroded gradually through her [C-section] scar. It was likely a very gradual process as the IUD had been inserted 10 years before,” Walker told Live Science. The woman’s urinary symptoms were probably caused by the bladder stone, Walker said.

Although terms like “migration” are sometimes used in reference to IUDs that wind up outside the uterus, IUDs do not move on their own, noted Dr. Elizabeth Kavaler, a uro-gynecologist at Lenox Hill Hospital, in New York City. Sometimes the IUD punctures the uterus when the doctor inserts it. From there, “either pressure or inflammation or infection can create a breakdown of the tissue around the IUD, and so a piece of the IUD can wind up puncturing right into the bladder, and then the stone forms around it,” Kavaler told Live Science. “But it’s not like an IUD is an actively moving thing; it’s inert. It’s just sitting there, and the tissue around it will break down,” she added.

Patients shouldn’t worry, based on this case report, that their IUDs are eroding into the bladder, Kavaler added. “This is just an unusual situation that doctors should be aware of,” she said.

In the woman’s case, doctors used lasers to pulverize the bladder stone, then pulled the IUD out through the vagina; and by her one-month follow-up visit, her symptoms had resolved, the report said.