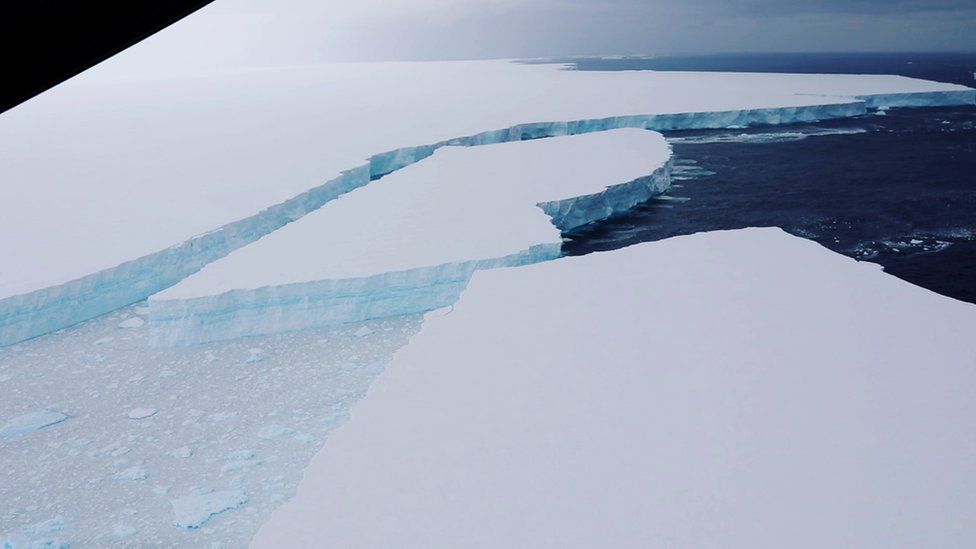 In July 2017, a gargantuan iceberg spanning five times the area of New York’s five boroughs snapped off the coast of Antarctica and began to drift northward.

Though its edges have crumbled considerably since then, the iceberg — named A-68a — is still the largest on Earth, and it’s currently barreling toward an island wildlife refuge in the South Atlantic Ocean. New aerial footage taken by the United Kingdom’s Royal Air Force (RAF) reveals just what that island might be up against.

For starters, the RAF footage really drives home how massive this ice giant is. (As of early April, A-68a measured about 2,000 square miles, or 5,100 square kilometers, in area, Live Science previously reported). The berg’s steep walls tower 100 feet (30 meters) above the sea, according to RAF News, and are gouged with tunnels, fissures and caves. Huge chunks of ice, or “growlers,” are rapidly cracking off on all sides, leaving behind a trail of debris that could impede boat traffic in the future. (The waters are occasionally used by both fishery vehicles and pleasure cruises, according to the BBC).

Of greater concern to scientists, however, is how deep the iceberg’s keel dips below the ocean’s surface. When A-68a broke away from the Larsen C Ice Shelf three years ago, its bottom-most point was measured at more than 650 feet (200 m) below the surface, BBC wrote. It’s possible that the iceberg has shrunken vertically as well as horizontally since then, though the RAF mission didn’t immediately reveal any insights there.

The iceberg’s depth matters as the behemoth bears down on South Georgia island – a British overseas territory that’s home to millions of penguins, seals, seabirds and migrating whales. If A-68a becomes grounded on the seafloor near South Georgia’s coast, it could create a deadly obstruction between the animals and their usual feeding grounds.

It’s still possible that A-68a will float harmlessly around South Georgia’s coast before drifting further northward — however, the RAF said, it still looks to be on course for a direct hit. The berg is about 90 miles (150 km) away from the island, and could make landfall by the end of December, the BBC said.