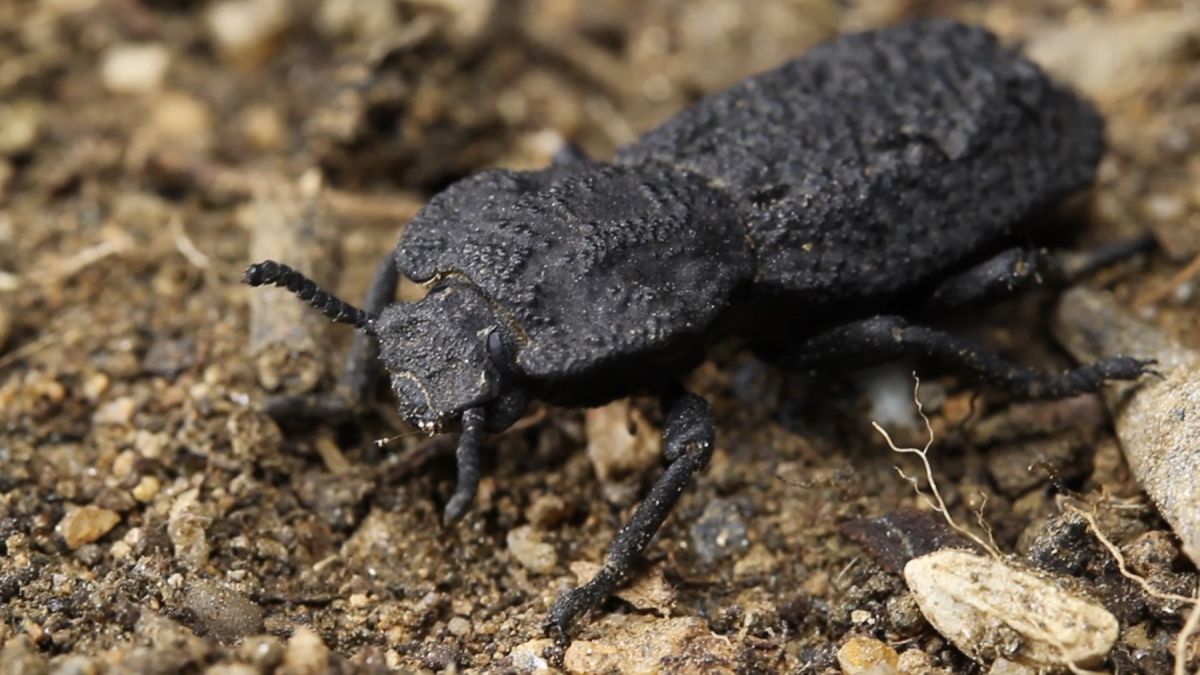 Diabolical ironclad beetles are almost unbreakable — you can smack them, stomp on them or run them over with a car, and they’ll scamper away uncrushed.

Now, scientists know why these beetles’ outer wing cases, known as elytra, are so tough — they’re made up of a series of smoothly interlocking puzzle parts; the geometry and internal structure of this “jigsaw” design increase the strength of the beetle’s armor.

Ironclad beetles (Phloeodes diabolicus) measure about 0.6 to 1 inch (15 to 25 millimeters) in length, and are found in woodland habitats in western North America, where they live under tree bark. Though their ancestors could fly, ironclad beetles lost their flight capabilities long ago, and their elytra are fused together, forming a crush-resistant shield.

Entomologists are all too familiar with the toughness of these barriers. Efforts to pin ironclad beetle specimens for mounting, display and storage frequently end with an unpierced insect and a pile of bent steel pins, scientists wrote in their new study, published online today (Oct. 21) in the journal Nature.

The researchers performed compression tests on the beetles to see just how much force those shields could withstand before cracking. They discovered that the “iron” beetles could resist continuous forces up to 149 newtons, or 33 lbs. (15 kilograms). This was about 39,000 times the beetles’ body weight, and more than twice as much force than other species of terrestrial beetles can endure, according to the study.

Microscopic analysis of exoskeleton cross-sections showed lateral support structures that made some parts of the elytra stiffer than others, to distribute weight uniformly over the beetle’s back and protect its organs. And further reinforcement came from the seam where the elytra fused together.

In the ironclad beetle’s flying relatives, the elytra notch together in “a tongue-and-groove design,” allowing them to smoothly open, close and release the lower wings for flight, the researchers reported. But in ironclad beetles, the fused elytra fit together like pieces in a jigsaw puzzle along the length of the insect’s abdomen. The protruding parts of these interlocking pieces, called blades, also distribute stress across the exoskeleton, preventing it from cracking.

When the researchers 3D-printed samples to test the strength of the jigsaw connections, they found that sutures with five blades were stiffest and could bear heavier loads. The scientists also detected layered microstructures in cross-sections of the blades that further diverted stresses away from the most vulnerable parts, protecting the narrow “necks” of the interlocking puzzle pieces from fractures and actually causing the pieces to lock together more securely.

Revealing the biological architecture that makes ironclad beetle exoskeletons near-uncrushable could help engineers design structures that are more impact-resistant, and the researchers put this to the test with their own 3D-printed designs.

“We demonstrate this by creating interlocking sutures from biomimetic composites that show a considerable increase in toughness compared with a frequently used engineering joint,” the scientists wrote in the study.