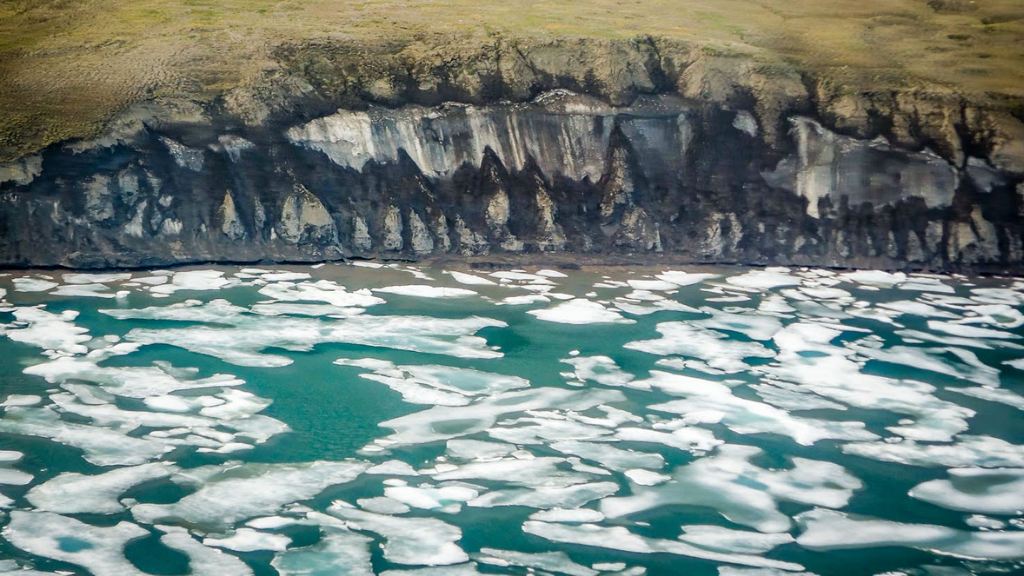 Millions of tons of organic carbon and methane beneath the Arctic Ocean thaw out and ooze to the surface each year. And climate change could speed up this release of greenhouse gases, new research suggests.

The carbon tied up in organic matter and methane (a carbon atom bound to four hydrogen atoms) are currently trapped in subsea permafrost, which is frozen sediment that became covered by 390 feet (120 meters) of seawater toward the end of the Paleolithic ice age about 1,800 to 1,400 years ago, according to the U. S. Geological Survey (USGS). Most subsea permafrost sits on the continental shelf under the Arctic Ocean, said study author Sayedeh Sara Sayedi, a doctoral student in the department of plant and wildlife science at Brigham Young University in Salt Lake City.

Because that sediment is in such an inaccessible spot, there’s only a little bit of patchy data on how much carbon and methane lie buried there and how quickly those gases are escaping into the ocean and atmosphere above, Sayedi added.

Some scientists consider this greenhouse gas reservoir to be a ticking time bomb, one that could suddenly spew into the atmosphere and trigger a climate catastrophe. But Sayedi and her colleagues propose a different scenario: Rather than a sudden release, these gases have been slowly and steadily oozing from the permafrost for centuries. Human-caused climate change could still make the situation worse by accelerating the rate of release, but this acceleration would occur over the course of several centuries, not decades or years.

“Still, the decisions we make today will make a difference in how it’s going to be affected,” Sayedi told Live Science.

In their new study, published Dec. 22 in the journal Environmental Research Letters, the team attempted to assemble a comprehensive picture of the subsea permafrost using all the piecemeal data currently available; they also asked 25 permafrost scientists to use their expertise to estimate how much organic carbon is hidden in each specific layer of subsea permafrost. By compiling their perspectives, the team captured a more detailed picture of the ecosystem as a whole, and they estimated that the permafrost currently holds about 60 billion tons (544 metric tons) of methane and 560 billion tons (508 metric tons) of organic carbon.

Each year, about 140 million tons (128 metric tons) of carbon dioxide and 5.3 million tons (4.8 metric tons) of methane escape from the permafrost into the atmosphere, they estimated. That’s roughly equivalent to the carbon footprint of Spain, according to a statement. That said, due to the paucity of data, these emissions estimates remain highly uncertain, the authors noted.

The authors also concluded that, rather than being driven primarily by recent human activity, much of these greenhouse gas emissions began after the Last Glacial Maximum, when ice sheets were at their greatest extent. However, human-driven changes may still drive up these emissions “several hundreds or thousands of years from now,” they wrote.

In fact, over the next 300 years, the experts expect the rate of greenhouse gas emission from subsea permafrost to increase substantially if carbon emissions from human activity continue as usual. If emissions rise throughout the 21st century, the permafrost would release four times more greenhouse gas than if emissions started declining by the end of this year and reached net-zero by 2100.

In the business-as-usual scenario, the increase in emissions would ramp up over the next several centuries, but still not enough to create a so-called “methane bomb.”

By overlooking subsea permafrost in models of climate change, scientists run the risk of miscalculating the amount of greenhouse gas being emitted into the atmosphere, which may skew where we set our targets for reducing emissions, Sayedi said. In the next five to 10 years, Sayedi said that she hopes additional research into subsea permafrost can help fill the gaps in our knowledge and provide more certainty about how much carbon is actually down there — and how much is getting out. Other factors, such as the extent of sea-ice cover, may also affect how much gas leaks into the atmosphere, since the ice can act as a ceiling trapping the gas underneath, she said.